Investors have finally pitched a tent above the WeWork circus. Should we REIT (real estate investment trust) shareholders be concerned about a fallout?

The stock was touted in some circles as a potential savior for the office REIT market. As fewer and fewer employees work in traditional workspaces, co-working spots have popped up all over the place in recent years.

Your income strategist knows from experience. Back in 2012 I was a founding tenant for a new tech-focused co-working location here in town. I’m an introvert when I work and found it impossible to take a phone call with everyone yapping in the place. My pup Bianca, however, enjoyed her role as greeter: 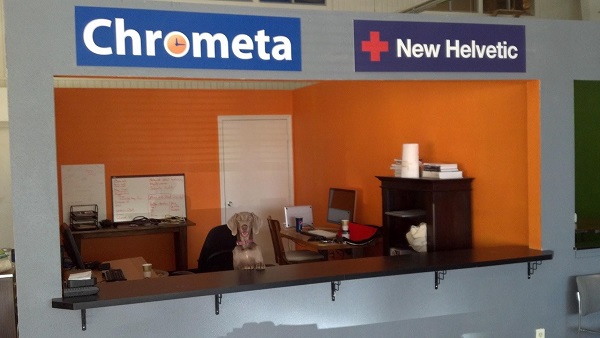 To her dismay, I soon started my next company and we bounced in three months to grab our own office space down the street. This was before WeWork made its way to the West Coast. Their locations are nice, but c’mon, this is just white-collar office space we’re talking about.

Fast forward to today, and Mr. Market finally sniffed out that WeWork is nothing more than a REIT. (NYU professor and entrepreneur Scott Galloway pointed this out as he picked apart the firm’s comically poor corporate governance.) And REITs trade as a multiple of their FFO (funds from operations), which is a problem when there is no FFO. WeWork’s operations gobble up its funds and more, so the intrinsic value of the firm is closer to zero than the $20 to $30 billion valuation the business model-less company was looking for from the public markets!

But this isn’t our problem. WeWork doesn’t pay a dividend, and it’s nowhere close to initiating a payout, which means it is disqualified from our perfect retirement portfolio considerations. But are there REITs renting space to WeWork that we should now be concerned about?

Not really. Nareit, the association for REITs, reports that only 15 REIT-owned properties rent to WeWork. The rapidly falling angel accounts for just 0.2% of REIT-owned office space.

Does this mean we should look for dips to buy? No, because the offices are right up there with brick and mortar retail locations. I’ve been warning income investors about retail REITs since 2016 because the business model of in-person sales is permanently impaired by the Internet.

Same goes for office space. Who wants to commute when you can “telecommute” and work the entire morning in your pajamas? A 20-step commute to the home office beats the 20-minute drive to the shared office any day.

WeWork was all hype. We’re better off focusing on real megatrends and identifying landlord opportunities that will benefit. Here are two “pick and shovel” REIT plays that most investors aren’t considering. (And unlike WeWork, these business models are recession-proof to boot!)

Industrial space is more nuanced (and in higher demand) than places to merely plug in a laptop. Industrial landlord W.P. Carey (WPC) has a nice portfolio that includes automotive, construction and warehouse properties.

While WeWork’s tenants can leave whenever they want, WPC locks in its tenants long-term. Virtually all (99%) of WPC’s leases include contractual rent increases. And 65% of them are linked to the consumer price index (CPI) for inflation protection. It’s a rare REIT that is well positioned for any rate environment.

The leases are long ones, too. The average length (weighted by value) is more than a decade. If you’re convinced we’re going to have a recession in the next year or two, this is the lease portfolio for you. Less than 4% of WPC’s leases expire before the end of 2020!

We added WPC to our Contrarian Income Report portfolio at a bargain this January when other “first-level” investors were selling everything they owned. We’ve enjoyed total returns (including dividends) of 44% in just ten months:

A REIT Run by Grown Ups 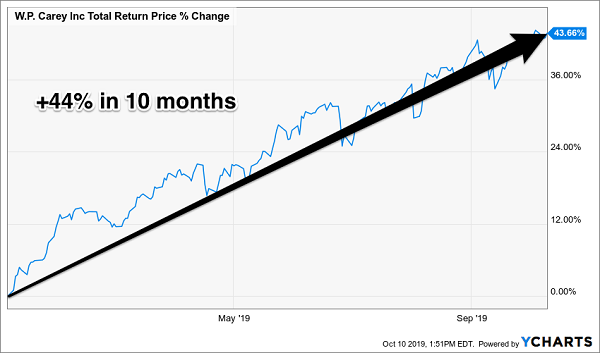 Moving back to the flashier side, I’m hearing from subscribers who are asking me about ways to play 5G. Well, I’m a tech guy who gets a new phone every two years. I just got my new Samsung Note 10, and I did not opt for the 5G version because I don’t anticipate my cell phone network being upgraded significantly between now and my next Note.

However, there’s no arguing that we’re doing more and more with our phones. Our tendency to stare at our phones all day may not be good for conversation but it’s great for REIT American Tower (AMT). The cell tower operator is a landlord for mobile phone traffic, collecting rents via its 170,000 towers (from carriers such as AT&T and Verizon). Think of AMT as a “toll bridge” for cell phone traffic.

I recommended AMT to Hidden Yields subscribers 11 months ago, and the stock has already run 41% higher. We’ve also received not one, not two, but three dividend raises! 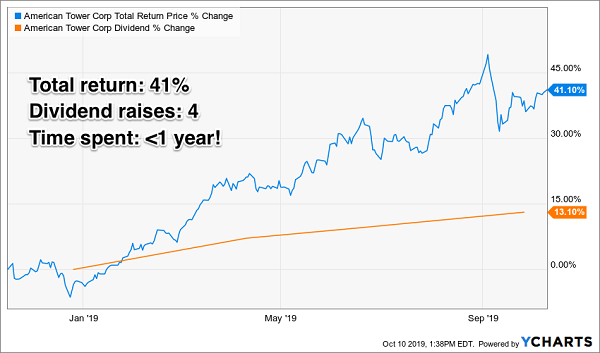 AMT’s price is a bit high for me to recommend adding new money here. I’ve got a better idea, another dividend grower that I believe has the potential to return an AMT-like 41% over the next 11 months.

I’ll have the details for you in this Friday’s edition of Hidden Yields. Unfortunately, if you’re reading this, it’s probably because you’re not yet a subscriber to HY!

If fast 41% gains are not a problem for you, then I’d like to invite you to take my dividend growth focused service for a spin. The service is a double-digit return machine, as we’re sitting on gains of 94%, 69% and 81%. Please take Hidden Yields for a risk-free test drive today so that I can send you my best idea this Friday along with seven more dividend payers primed to return a fast 40% to 50%.