2 Cheap Energy Funds to Buy Before They Rip Higher

What a year it’s been for oil! 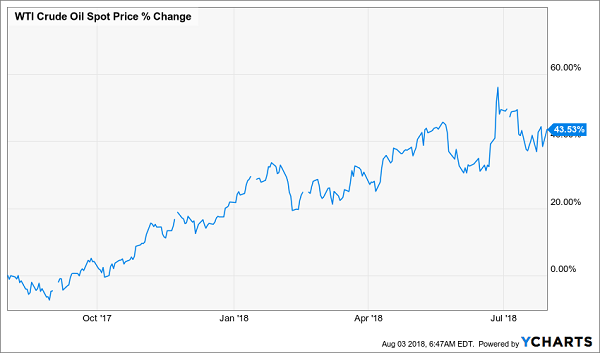 With a 43.5% climb in just a year, oil prices have blown by several technical levels to breach $70, and $80 is on the table by the end of the year.

This is the highest price since 2014, and it’s a very good sign for stocks—which is why you should consider buying 2 funds paying massive dividends and boasting top-notch energy-sector exposure.

(And if you prefer to invest in oil through individual stocks, rather than funds, check out this recent article by my colleague David Peltier.)

Before I show you my 2 energy funds, though, let’s talk a bit about what isn’t happening with oil.

First, oil is nowhere near the $100 range it maintained in the early 2010s. And since the economy is much stronger now than it was back then, we know that oil can easily get back to that $100 range without being a big drain on consumer spending.

That alone is a great reason to bet on oil.

You can see this in the fact that even though gas prices are high these days, we’re not seeing a huge uproar from consumers.

Of course, some people are grumbling, but it isn’t the kind of nationwide upset we saw in 2010 and 2011, when a mix of higher gas prices, high unemployment and stagnant wages crushed demand and squeezed American families.

Gas Climbing—But Not Peaking Yet

In part, rising wages and higher inflation outside of oil are causing Americans to be less shocked by gas prices. And while that may change, it isn’t changing now, which means demand for gas (and thus oil) is by no means going to slow down.

And that’s why energy stocks are a terrific place for you to invest right now.

Of the over 40 energy closed-end funds (CEFs) out there, 25 boast discounts to their net asset values (NAVs) and 11 have huge markdowns (wider than 5%). 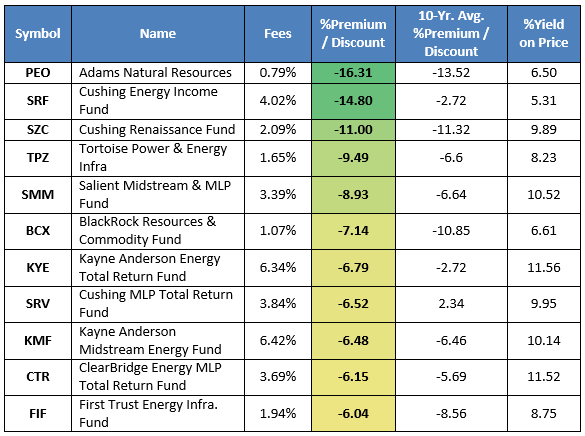 Out of all these CEFs, several are appealing, for different reasons.

Take the first one I want to tell you about today: the 6.5%-yielding Adams Natural Resources Fund (PEO), which has the widest discount of all these CEFs and is also one of the oldest energy funds, with a tremendous long-term total return:

PEO Has a Great History 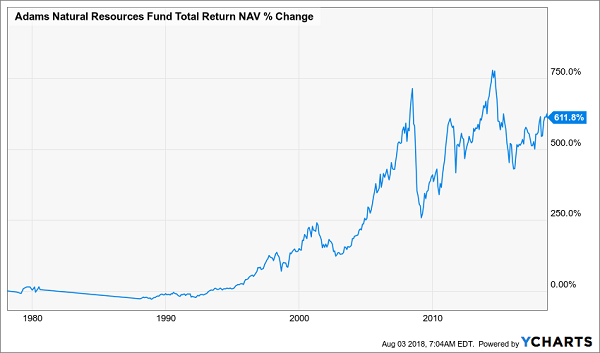 But over the last decade, this fund has traded at about a 13.5% discount to NAV, which isn’t much different from its current pricing.

That means the discount probably won’t close completely anytime soon. But it will likely get smaller—enough to bring the price up by around 7.1% from today’s levels, since the discount was around 10% just three years ago (and that doesn’t include any additional upside from oil’s continued rise): 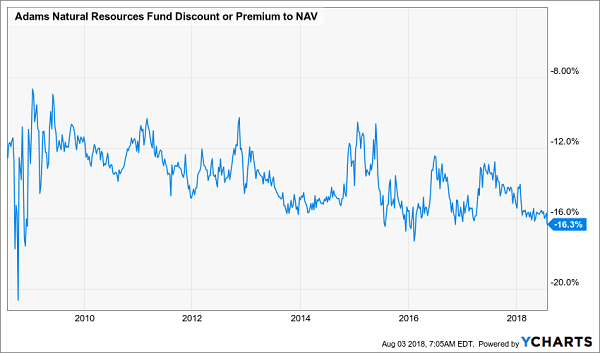 Since PEO’s discount has been widening lately, this could be a great contrarian play for short-term gains.

That brings me to my second pick—the Cushing Energy Income Fund (SRF), which is also one of the most expensive energy funds out there on a fee basis—4% expenses, compared to PEO’s 0.8%. But remember, fees come out of NAV, so you won’t get a bill for management here. Plus, this chart points to huge price upside ahead for SRF:

SRF’s Mispricing Is an Opportunity 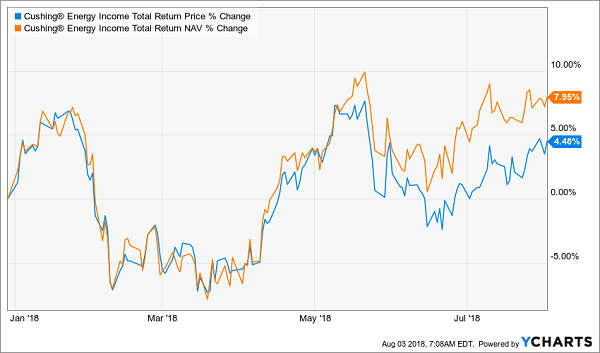 While SRF has been benefiting from the improvement in oil prices, the market seems to be ignoring that fact, resulting in SRF’s total NAV return exceeding its total price return by a wide—and growing—margin.

As a result, SRF’s discount has exploded from its 2.7% average over the last decade to over 14%, despite the tremendous bull run we can expect in energy, thanks to the rise in oil.

In other words, we’re talking 12.8% in capital gains just from the discount closing alone—which you can get on top of SRF’s 5.3% dividends.

As I’ve just shown you, a CEF’s discount to NAV is a surefire indicator that it’s on the launch pad for some serious price upside.

And remember that many CEFs pay dividends 3 or 4 TIMES higher than your typical stock—upwards of 8.0%! So you’re getting paid very handsomely while you wait for these funds’ discount windows to slam shut.

Right now, I’ve got 4 CEFs on my radar that are ALL trading at ridiculously wide discounts to NAV. When these absurd discount windows evaporate, we’ll be in line for massive 20%+ upside in the next 12 months.

Here’s a quick look at each of them:

I can’t wait to show you all 4 of these high-powered CEFs close up. All you have to do is CLICK HERE to get the full story (names, tickers, buy-under prices and everything you need to know) right now!