Everyone’s obsessing over FAAMG stocks, and for good reason. Facebook (FB), Apple (AAPL), Amazon (AMZN), Microsoft (MSFT) and Google, now known as Alphabet (GOOG), are on a tear for 2017, rising nearly 30%, on average.

And today I’m going to show you two funds that invest in these companies while offering higher dividends than any of these stocks pay individually.

Of course, everyone has heard of Facebook, Apple and Google. (And in case you missed it, my colleague Brett Owens revealed five individual tech stocks he likes now on June 19.)

But hardly anyone has heard of either of these high-yielding tech funds.

I’m talking about the BlackRock Science and Technology Trust (BST) and the Eaton Vance Enhanced Equity Income II (EOS), which yield 5.2% and 7.1%, respectively.

Those names don’t exactly roll off the tongue, but their performance in 2017 demands respect. Both funds have beaten Microsoft so far this year, and BlackRock’s fund has also topped Apple and Alphabet: 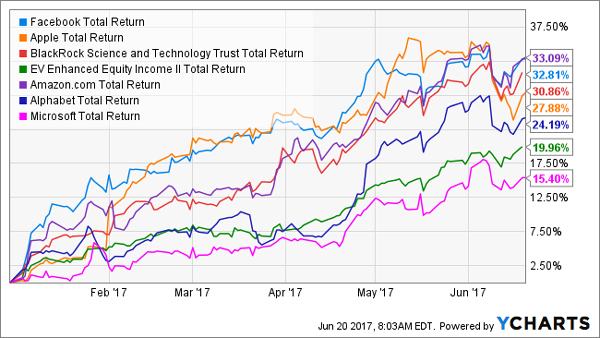 These funds’ strong 2017 showing is no surprise because both are heavily invested in FAAMG stocks. In fact, about a quarter of each fund is dedicated to FAAMG:

As for the rest of their portfolios, BST is a tech fund, so it also has major investments in Alibaba (BABA), Avago Technologies (AVGO) and Salesforce (CRM), while also putting nearly 5% of its cash in Visa (V) and Mastercard (MA). That makes sense, considering that both of these companies have invested in mobile payments and e-commerce for years.

In fact, you could consider BST much more of a FAAMG pure play than the Eaton Vance fund. Not only is BST a tech fund, its top five holdings are FAAMG stocks. EOS, on the other hand, has more Visa shares than Apple or Microsoft, and it also diversifies into biopharma firms like Celgene Corporation (CELG) and Allergan (AGN).

Which Fund to Choose

You could buy both of these funds, enjoy a hefty income stream, get a bunch of FAAMG and other high-quality stocks and call it a day. But if you really want to secure your portfolio from a downturn, I encourage you to look a little closer.

And it may surprise you to hear that the better fund to buy is the one with the lower yield: the BlackRock Science and Technology Trust.

First, let’s look at BST’s discount to net asset value (NAV), an area that plenty of investors fail to pay enough attention to.

Remember that CEFs often trade at a price lower than the actual value of the assets within the fund—something very different from mutual funds, which always trade at their NAV. Right now, BST is trading at a bigger discount to its NAV than EOS, although the discount on both funds is shrinking:

A Better Deal With BlackRock 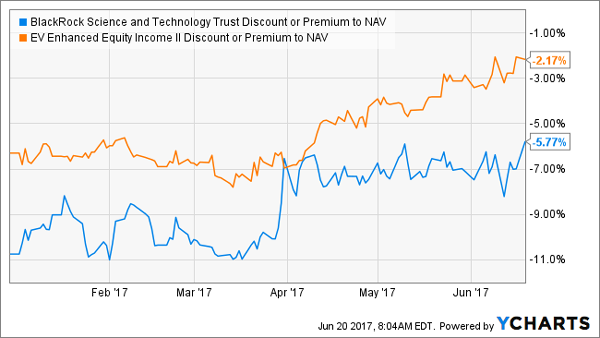 Of course, a lot of investors will want to buy the EOS fund because it pays a bigger dividend—7.1% is, of course, much more attractive than 5.2%. But this would be a mistake.

If we look at both funds’ annualized returns since inception, BST is the clear winner, destroying EOS’s rather pathetic 2.8% return, even though both funds have about the same management fee:

Of course, EOS’s history includes the Great Recession and the stock implosion during that period. But EOS’s history also includes 2012–13, when FAAMG stocks exploded in value.

But that isn’t the main reason why I prefer BST.

When the fund first came on the scene, its market performance was pretty much the same as that of EOS—it didn’t show any indication that it was anything special. Then, in the middle of 2016, something incredible happened: BST took off while EOS floundered, and it has continued to soar since then: 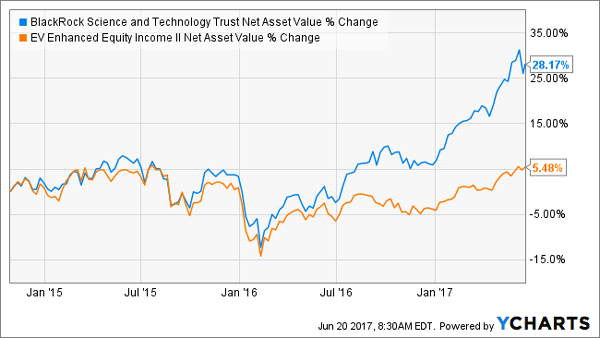 How did BlackRock do it?

Savvy management. The fund managers focused the portfolio on tech outperformers and carefully sought out opportunities while EOS’s portfolio saw relatively little improvement. That’s on management, and BST has proven its brain trust is doing a lot more to earn its fee than that of EOS.

Of course, a lot of investors won’t look that closely—or they’ll just focus on the bigger dividend payout from EOS. That shortsightedness will cause problems in the future. EOS has cut its dividend three times in its history. If it faces another major downturn, it will likely cut the payout again, making that 7% dividend suddenly seem a lot less attractive.

Don’t Fall for This False Choice

Why choose between a fund with a 5.2% yield and great management and a 7% player with weak management when we can have both?

I’m talking about a 7.6% average dividend from 4 of the sharpest management teams in the CEF space.

In fact, the all-star team at one of these funds is so sharp they rebounded from the 2008 crash far more quickly than the market … and they did it by paying out a fat 7% dividend the whole time! 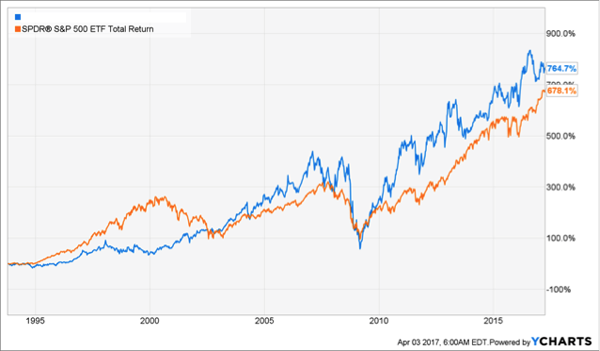 That’s not even the best part—they turned out this incredible performance by investing in real estate.

You read that right: the very thing that caused the collapse in the first place!

If this isn’t a fund worth paying a premium for, I don’t know what is.

But here’s the thing: thanks to the wacky mispricings in CEF land, this one’s trading at a discount to NAV that’s far wider than its long-term average.

I’ve just put out a new special report that reveals this winning CEF, along with 3 others from different corners of the market. But they do have this in common: they all boast 7%+ payouts and they’re all set for an easy double-digit price spike, too.

Simply click here to get your copy of this no-cost report, which gives you the names, tickers and my complete research on all 4 of these income wonders now.