Are real estate investment trusts in a bubble? The evidence is mounting—especially in the big names many investors see as sacred.

Today we’ll look at two “frothy” trusts you should watch like a hawk if you hold them … and avoid if you don’t. Further on, I’ll show you two REITs that are terrific buys now. Both boast gaudy 6.0%+ dividend yields and have big growth ahead, too.

“O” Is for Overpriced

First, we need to talk about Realty Income (O), a giant among REITs, with a $17.9-billion market cap and 4,600 retail properties across the U.S. The stock has soared 46% in the past year, nearly tripling the 16% gain in the benchmark Vanguard REIT Index ETF (VNQ) and leaving the S&P 500, with just a 3% rise, in the dust.

There are plenty of reasons why investors love O. For one, it pays dividends monthly, which is nice if you’re leaning on your portfolio for income. Plus, under the REIT’s triple-net-lease model, tenants pay rent and the building’s operating costs, including taxes, maintenance and insurance.

That’s helped light a fire under Realty Income’s funds from operations (FFO)—the REIT equivalent of earnings—and, by extension, its dividend: 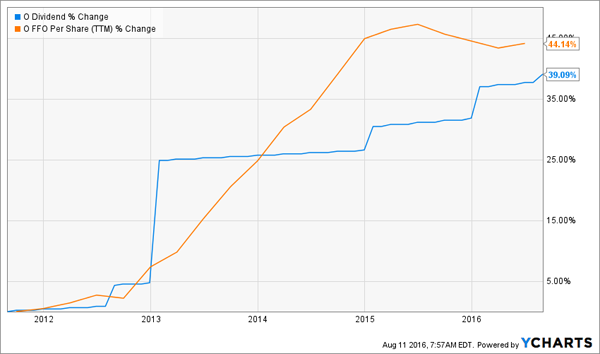 Realty Income’s still posting impressive results: in the second quarter, revenue jumped 6.7% from a year ago, while adjusted FFO per share gained 4.4%. Its occupancy rate rose from 97.8% to 98.0%.

It’s hard to argue with those numbers, but here’s the rub: O now trades at 25 times trailing-twelve-month FFO—way up from 18 a year ago, before two Chinese stock-market selloffs and the Brexit vote sent investors scurrying into low-volatility stocks. A reversion to that number implies a 28% drop from today’s level.

I know a fall like that seems unlikely with a dominant REIT like O, especially with interest rates headed nowhere. But with a high valuation like this, it wouldn’t take much to start the ball rolling.

That brings me to the dividend yield, which stands at 3.4% today—just a shade above Realty Income’s all-time low of 3.25%. Why settle for that when you can pay much less for a yield nearly twice as big, as I’ll show you in a moment? 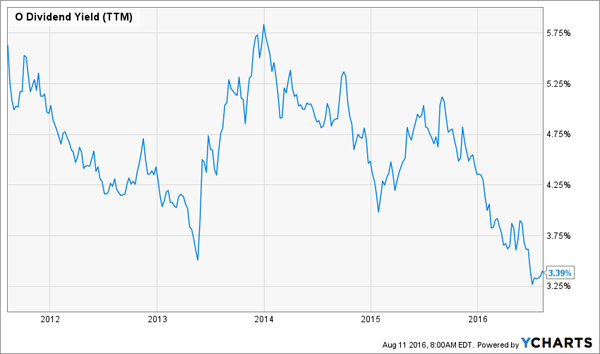 Realty Income is far from the only big-name REIT with a disappointing yield and a sky-high valuation. Digital Realty Trust (DLR), which leases out corporate data centers, has seen its share price spike 57% in the past year—boosting its price-to-FFO ratio from 12 all the way up to 21. 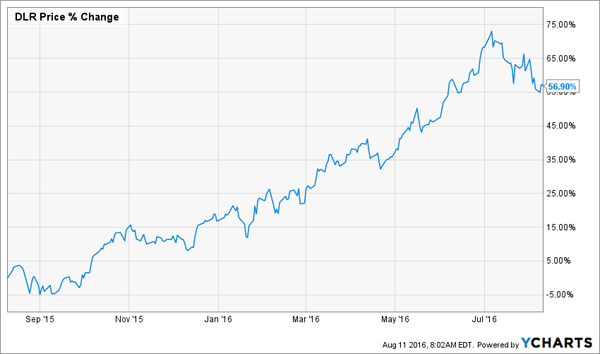 That’s dragged its trailing-twelve-month dividend yield down to 3.4% … this from a REIT that’s handed investors an average yield of 4.7% over the past five years. That’s 38% higher than today’s level.

A weak yield like that doesn’t give income-seekers much incentive to push DLR higher … and sooner or later, its high price-to-FFO ratio will revert back to more normal levels.

If you hold this one, consider selling at least part of your stake to lock in the stock’s fat gain. If you don’t already own it, you’ve missed the boat. But don’t worry, there’s still time to get in on the two REITs I’ll show you at the end of this article.

Luckily, there’s still a rich hunting ground for investors on the lookout for cheap REITs with 6.0%+ yields … but it’s not in the big names. It’s in the mid-cap space, where you’ll find REITs and regular stocks with market caps of $1 billion to $10 billion.

Mid-caps don’t get much analyst attention, which is great for us, because it gives us a better shot at finding with yields that haven’t been dragged down like the big guys’ have.

The best part? Mid-caps have delivered bigger gains than large- and small caps over the past 20 years. 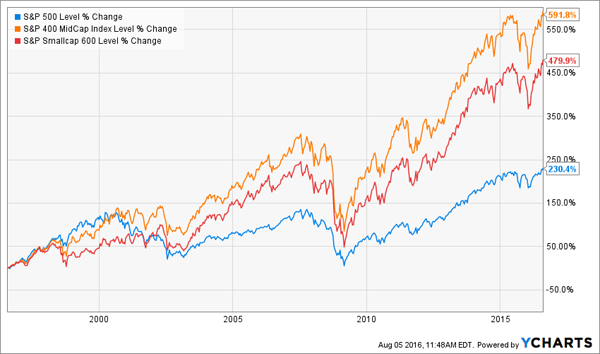 Which brings me to the two bargain REITs I want to tell you about today.

Apple Hospitality REIT (APLE) has missed most of the REIT rally, rising 11% in the past year. As a result, it still trades at a reasonable 11.5 times trailing-twelve-month FFO.

Why aren’t investors bidding this 6.0% yielder into the stratosphere? Because A) it gets little analyst coverage, due to its middle-of-the-road $3.5-billion market cap, and B) it’s a new issue, having just started trading a little more than a year ago.

But this is no fly-by-night startup. Apple owns 179 hotels in 30 states, operating under the Hilton and Marriott brands.

That combo of well-known names and a wide geographic footprint is paying off: in the second quarter, Apple’s occupancy rate ticked up to 82.2% from 81.9% a year ago, dwarfing the industry average of around 62%. It’s also getting more revenue per room: $113.59, up from $108.09.

Adjusted FFO per share jumped 18%, to $0.52, easily covering the $0.30 distribution. And there’s more growth ahead: the REIT’s in the process of merging with Apple REIT Ten, which adds 56 hotels and three more states to the mix. Check in to this one now.

Lexington Realty Trust (LXP) is even smaller than APLE, with a $2.6-billion market cap. But it’s an equally exciting prospect in the mid-cap REIT space. The trust owns office, industrial and infrastructure properties across the U.S.

The stock is up 23% in the past year, but unlike Realty Income and Digital Realty, LXP trades at an attractive 9.5 times FFO today.

You can check off the high yield and dividend-safety boxes, too: Lexington pays out 6.3% today, which is actually above its five-year average of 6.2%. In the last four quarters, the REIT has generated $1.15 of FFO per share and paid out just $0.68 in dividends, for a safe payout ratio of 59%. 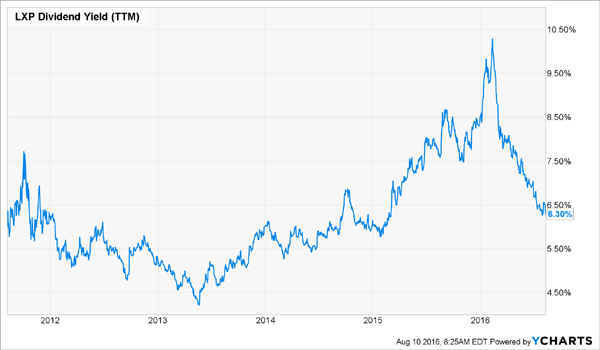 LXP’s secret weapon is its experienced management team, which is always looking to prune less promising properties from the portfolio and funnel the cash into better performers.

This is a potent mix that will put a nice long-term lift under Lexington’s FFO. That makes now the perfect time to buy this large-cap-in-the-making, before the price zooms higher.

LXP and APLE are great buys now, but they’re far from my favorite high-yield investments.

That honor goes to three other picks throwing off much higher yields than these two mid-cap REITs. I’m talking payouts of 8.0%, 8.4%, and even 11.0%!

Like LXP and APLE, they’re buried deep in the bargain bin, trading at 7% to 15% discounts to their true value. But I don’t expect income-starved investors to ignore them for much longer, so if you get in now, you’ll set yourself up for a nice gain as that gap closes.

Don’t miss out. Go right here to get the full story and uncover the names of these 3 incredible income plays now.