There’s no doubt Donald Trump’s election win has been great for stocks.

Municipal bonds? Not so much.

In the last month alone, “munis” have lost over 3% of their value—a huge decline for an asset class that’s supposed to be safe and stable.

So is it time to sell your munis, give up on safe income and try to ride the Trump rally in stocks?

No way. In fact, if you’re just thinking of doing that now, you’re probably too late.

The Trump rally reversed course after Thanksgiving, with a down day that threw a damper on the stock market’s post-election euphoria. That correction may continue. After all, Trump was the first Republican presidential candidate in recent history who didn’t have Wall Street’s full backing. That means worries about his economic plans could easily resurface, causing stocks to sell off—and investors to run for cover.

Where does that leave municipal bonds? On sale—but not for long.

If you fall into the camp that believes Trump will be bad for the economy, you may be worried about municipal bond defaults.

You shouldn’t be. Default rates for municipal bonds are far less than 1%–in fact, it’s closer to 0.16%. By these statistics, you’d need to buy over 600 municipal bonds before just one defaults

But if you’re still concerned, you could cut your risk even more by limiting yourself to states that have positive gross domestic product (GDP) growth and, therefore, the lowest theoretical default risk.

There’s good news on that front: only 11 states saw GDP declines in the second quarter, and most of those have very small populations and economies. The only exception would be Illinois, with -0.9% annual GDP growth. 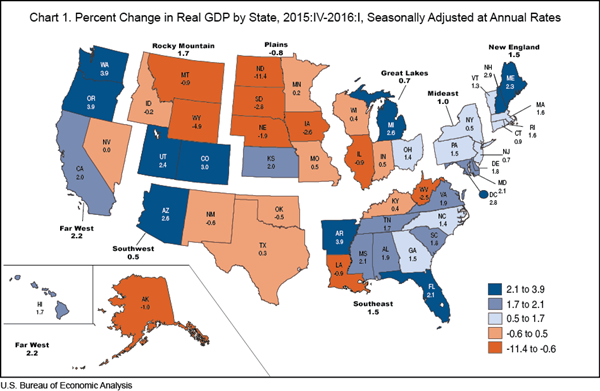 So the truly risk-averse income investor would want a municipal-bond fund that avoids Illinois while betting heavily on fast-growing states like Washington, Oregon, Arkansas and Colorado.

If this sounds like you, you’ll want to steer well clear of the BlackRock Municipal Income Investment Quality Trust (BAF), which yields 5.9% today.

Unfortunately, if you want a municipal bond fund, you’ll find it almost impossible to avoid these low-growth states, since they’re the biggest municipal-bond issuers in the country.

But you can avoid the laggards whose economies are shrinking through a fund like the Dreyfus Municipal Bond Infrastructure Fund (DMB), which focuses on Texas (11.6%), New York (10.6%), California (8.8%), Pennsylvania (8.3%) and Michigan (6.9%). If Trump really is going to focus on infrastructure, as he’s repeatedly stated, this fund will likely get a lot more interest from investors, as municipal-level infrastructure investments take off in lockstep with federal initiatives.

A more diversified muni-bond fund, with various investments across several states, would be a nice complement to DMB, and the Delaware Invest National Municipal Income Fund (VFL) fits the bill. Despite the name, this fund has assets in several states, with 69% of its holdings in California, New York, Arizona and Pennsylvania.

VFL is also reasonable on the fee front, charging just 0.58% of assets for management and 0.49% for other expenses, so you’re paying $10.70 per year for every $1,000 you invest. And don’t worry—those fees are taken out of the fund automatically, so you won’t be sent a bill.

A 1.07% fee may seem high compared to an index fund like the Vanguard Total Stock Market ETF (VTI), which charges just 0.05%. But keep in mind that this microscopic fee results from the fund’s passive approach: the managers aren’t really doing anything; they’re just tracking an index.

This does make VTI a good buy for some investors in some situations, but not if you’re looking for low volatility, high income and safety. I know I don’t have to tell you that stock-market declines of 40% or more have happened several times throughout history, and they’ll happen again.

VTI is a completely different animal than VFL and DMB, the latter of which charges 1.14% per annum. These funds are very selective about which municipal bonds they buy, taking into account duration, default risk and so on.

These calculations keep these funds’ volatility low compared to other investments, and that’s crucial if you want to protect your nest egg in times of major financial stress, like the Great Recession of 2007–2009

Unfortunately, VFL and DMB are much newer than VTI, so we can’t compare their performance to the all-stock ETF during the Great Recession. But we can do so with the iShares National AMT-Free Municipal ETF (MUB), which was around back then. It’s the yellow line below.

Calm Before, During and After the Storm 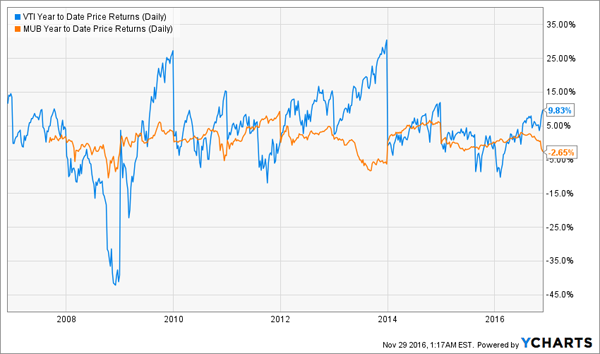 As you can see, while VTI swung to -40% lows and saw double-digit negative returns during and after the crisis, MUB briefly dipped to a -5% return in late 2013 but stayed slightly positive more often than it went negative.

Despite that steady performance, I still recommend VFL and DMB over MUB, for two reasons. The first is dividends. 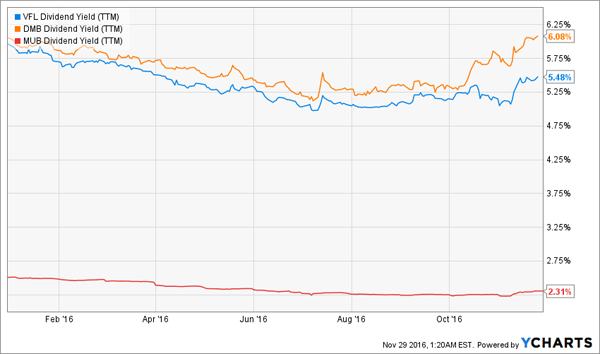 These funds are offering a 5.8% average yield, more than twice that of MUB. A $100,000 investment will yield over $480 in monthly income—and that’s tax-free.

Secondly, VFL trades at a 9.4% discount to its net asset value (NAV), while DMB’s discount to NAV stands at 8.9%. Earlier this year, both funds traded at discounts of around 3%, on average, so they have more than 6% upside from here … and while you wait for that, you’ll be collecting an outsized income stream.

6 More Screaming Bargains Yielding Up to 8.0%

As attractive as these 2 municipal-bond funds are, they just don’t pay enough to merit a place in our new “No-Withdrawal” retirement portfolio. As the name suggests, it lets you retire and live solely on dividend income without having to sell a single share.

This unique portfolio consists of 6 other overlooked buys that today boast an eye-popping average yield of 8.0%!

And even though municipal bonds are remarkably stable, you’re still putting a lot of cash into just two funds.

Not so with this retirement portfolio, which cuts your risk even further by spreading your cash across 6 safe, high-yielding investments that hold up well no matter what the market does. And just like the muni funds above, all 6 have missed out on the Trump rally. But that won’t last long, so the time to buy is now.

I can’t wait to show you these 6 incredible investments and the nuts and bolts of our strategy. Simply click here to learn how easy it is to start collecting a recession-proof 8.0% income stream today.