Today we’re going to dive into 3 blue chip names your friends are probably dodging like a co-worker with a bad cold right now.

That’s too bad, because they’re making a big mistake.

Because even though they’ve gapped way higher in 2017, these 3 stout picks are just getting started. So if they’ve been taking up space on your watch list (and you’re far from alone if they have), now’s the time to make your move!

And that goes double if you’re investing for the long haul. Say 10 years or more.

I’ll share their names in a second. First, let’s dive into precisely why these 3 American icons are fueling up for their next jump higher.

A Story as Old as Capitalism Itself

First off, I know I don’t have to tell you that the S&P 500 is up big: a whopping 12% year-to-date, including dividends. That means anyone who bet on the US economy, and homegrown companies’ ability to keep fattening their profits, easily won out and notched a princely gain.

The proof is in the pudding: so far, 73% of S&P 500 companies that have reported results this quarter posted sales above analysts’ expectations. That’s a new record! It’s also a big jump from the 56% of firms beating forecast sales over the last 12 months.

What does this mean?

Simple: consumers around the world can’t get enough of what US companies are selling … and that’s translating into big growth for the best American blue chips.

JNJ: Jump on This Pullback

One of the leaders: Johnson & Johnson (JNJ), which boasts a track record of delivering for shareholders that few companies—inside or outside the pharma space—can top. JNJ has chalked up sales growth for the last six quarters, and earnings have been crushing estimates for more than twice as long as that! 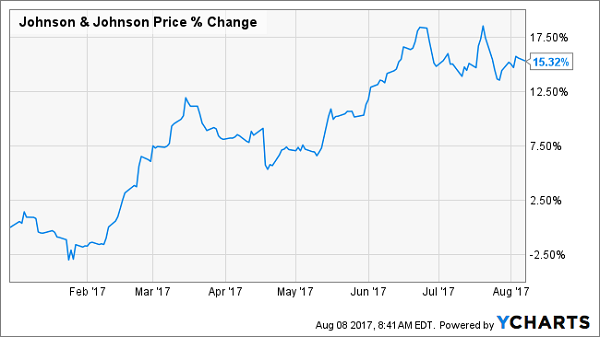 Here’s where our opportunity comes in: the stock has stalled in recent weeks, despite JNJ’s growing sales and earnings. The shares  also pay a 2.5% dividend and boast one of the strongest histories of dividend growth on the planet. That means it’s time to buy more—before the herd realizes its mistake and kicks JNJ higher.

2 Tech Buys for a Second-Stage Boost

As I just mentioned, the real strength in this year’s market is coming from tech.

That’s a change, since tech was relatively sleepy in 2016. But the sector is catching up with a vengeance: take the granddaddy of them all, Apple (AAPL), which is up 37% so far this year!

AAPL: Take a Bite Out of These Gains 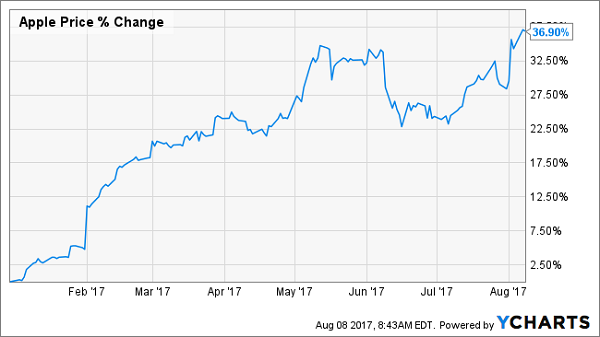 On top of these gains, AAPL is giving shareholders a growing 1.6% dividend. The stock’s non-stop climb stems from its absurdly low valuation in 2016, when its P/E ratio plunged to less than 10—ridiculous for a company reporting 7.2% sales growth and a whopping $45.4 billion in revenue in just one quarter.

Tim Cook is guiding the Cupertino colossus to $250 billion in revenue for 2017. That’s right—a quarter of a trillion in sales for just one company! And we’ve yet to see what the 10th anniversary iPhone, the iPhone 8 (due out this fall), will look like.

Another Way to Profit From Smartphone Junkies

Apple isn’t the only tech company smashing records; Amazon.com (AMZN) is too, with sales soaring 25% in the second quarter from a year ago, to $38 billion.

Oh, and if you’re worried about this company losing money (like it so often did in the past), you don’t have to. Amazon has reported a profit for every quarter since the first quarter of 2015. And its recent acquisitions, like its surprise play for Whole Foods, are setting it up for even fatter profits.

That’s why it’s no surprise that Amazon’s stock is up 32.5% so far this year.

AMZN: Ready for the 4-Digit Club 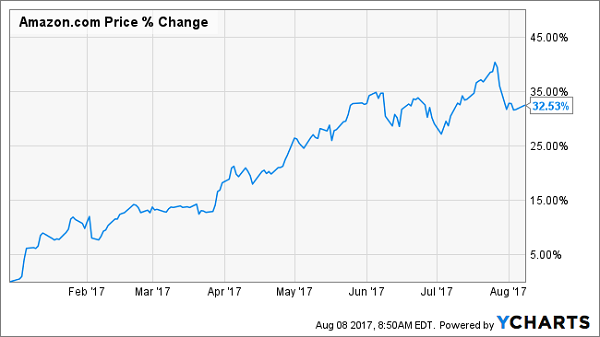 Notice, however, that we’re now far off the year’s high. That’s because Amazon has recently flirted with a psychologically important number. Currently at $993 per share, investors are hesitant to bring it up to that magical $1,000.

But that doesn’t mean they won’t—after all, Amazon broke that level just a week ago. So now is the time to get your hands on this unbeatable tech and retail behemoth before its stock hits four digits—and sticks there.

But there’s a problem.

Since their dividend yields are minimal (and Amazon doesn’t pay a dividend at all … at least not yet) most of those gains will only exist on paper. And as anyone who survived the 2008/09 catastrophe knows, paper gains can easily vaporize overnight

That’s why you need to protect and grow your nest egg with a unique collection of funds that offer EASY double-digit upside—I’m talking 20%+ GAINS in the next 12 months—plus safe yields of 7%, 8% and even 11%!

Because an income stream like that hands you something your typical S&P 500 name can never match: a big chunk of your overall gain in CASH … and no market collapse can take that away from you!

I’m talking about closed-end funds, a corner of the market most folks ignore. That’s too bad for them, because if you’re looking for a ready income stream in retirement (or to bulk up your nest egg before you clock out), these unloved cash machines are the answer.

The best news? I’ve just released a new Special Report that reveals the 4 very best CEFs for your portfolio now!

I’ve hand-picked each one from 4 different corners of the market: tech, real estate, international stocks, and bonds, to give you a level of diversification that adds a second layer of safety while you’re pocketing a BIG percentage of your total return in CASH!

I can’t wait to show you these 4 superstar funds. Simply CLICK HERE and I’ll share their names, tickers, buy-up-to prices and ALL of my research in your new Special Report.