Right now, the market only cares about one thing: Brexit. The market is volatile—which means now is a time to buy, buy and buy more as fears drive stocks too cheap.

But the simple fact is no one knows exactly how Brexit will impact the world’s various economies. For sure, there’s a consensus that Britain will take a hit—how big of a hit, though, is uncertain. And then there’s fear that political instability will impact Europe. But why should that cause the S&P 500 to lose 5% in just a few days?

Which is why I’m getting greedy as the world gets fearful. I’m especially eyeing high income producing stocks which have phenomenal intrinsic value as they get hit by investor fears.

Plus, there are some stocks that I think will benefit from Brexit. Here are four names that are already too cheap thanks to the panic across the pond.

With a 7.4% dividend yield and six years of dividend growth, Hospitality Properties Trust (HPT) has become a reliable income provider with a strong business model. With nearly 300 hotel properties across America, Canada, and Puerto Rico, this company has zero exposure to travel in Europe or the UK, which may suffer as a result of the Brexit.

A Brexit Panic and Recovery

The market knows HPT will have almost no impact from Brexit, which is why savvy investors bought the dip after the shocking result hurt the stock along with just about everything else. But HPT remains cheap; at a price-to-FFO ratio of 8, the stock is cheaper than a lot of other REITs out there—which is a good thing, since the entire REIT market has been on a tear in 2016 (something I’ve been cheering, since I have been aggressively positive about REITs since last year’s irrational downturn in the sector).

There’s one other good thing in HPT’s favor: travel is on a tear. Last year hotel profitability rose nearly 8%, according to travel analytics company STR. Travel demand in America is also staying strong, which is all the more reason to bet big on this REIT while it remains cheap.

Investors were slamming the sell button on shares of Ares Capital Corporation (ARCC) after the Brexit vote sending shares lower by more than 4%. 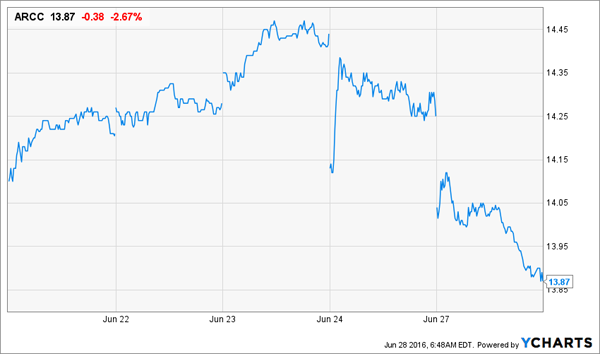 But this makes no sense. As a U.S.-based business development corporation, Ares Capital will see limited impact from what goes on in Europe.

Furthermore, the surprise Brexit has basically put a rate hike on hold—and now rumors of an interest rate cut are getting more popular. Low rates for longer will benefit ARCC.

First, because low rates mean investors will look for high yields elsewhere. That’s good for BDCs and their share prices.

Again, great for the company’s net investment income (NII), which is already 103% of payouts. Its gaudy 11% dividend should be safe, however, because NII will get a boost from continued low borrowing costs.

CenturyLink (CTL) is a telecommunications provider that is currently shopping its data centers. These properties have appreciated massively in recent months on the big cloud computing trend. Cloud computing is expected to grow 20% over the next four years, meaning CTL should be able to get top dollar for its properties if it chooses to sell.

A Dip for No Good Reason 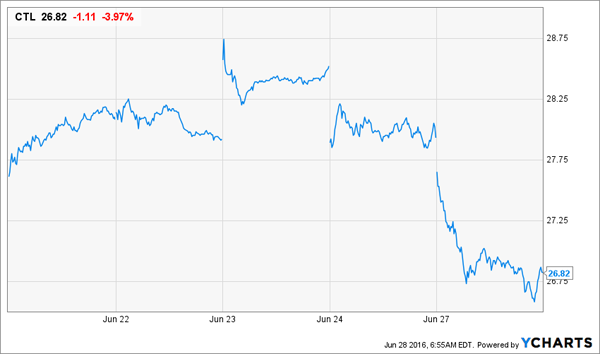 So why did the stock fall almost 7% in the days that followed the vote? Again, fears of Brexit are hurting stocks that have no exposure to Britain.

CTL management is constantly looking for ways to improve its free cash flow and return money to shareholders.

Thanks to Brexit, the stock’s dividend yield skyrocketed to 8%. CTL’s free cash flow covers the dividends today and has room to grow to boot. Last year, cash from operating activities was $5.15 billion, while dividends paid were just $1.2 billion. There’s plenty of room for CTL to keep paying that nice yield, making it a great buy right now.

Barclays (BCS) is not for the faint of heart – it’s down more than 30% since the Brexit news broke. Its position in the UK and Britain’s competitive weakness in the financial sector post-Brexit can’t be denied. Plus a weakening pound will make dividend payments to Americans more challenging. 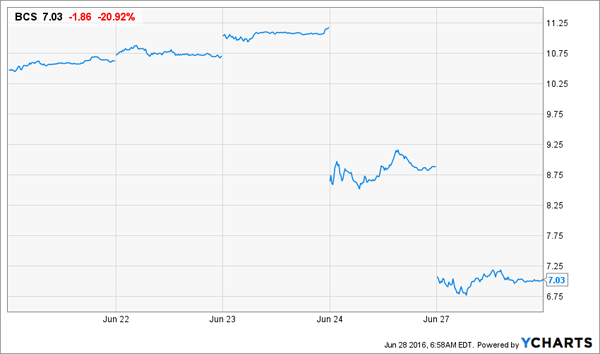 But Barclays is a cash producing machine. Net change in cash last year was $8 billion – meaning it had an extra “eight bills” on its balance sheet at the end of the year.

Its UK operations may struggle, but the bank is now split up into two divisions. One (Barclays Corporate and International) focuses on international expansion in high-profit and low-risk regions. That has meant an expansion outside of Europe entirely, making its current phenomenal discount an attractive entry point. While its British business remains the vast bulk of Barclay’s business, the rapid expansion abroad means this is likely to change quickly—and the market is not pricing that upside into the stock quite yet.

We’re already seeing the market begin to recover, because people are quickly realizing there are phenomenal companies that were indiscriminately sold off in a state of panic. That hysteria may come back though, which is why it’s important to protect your portfolio from violent volatility.

The best way to do this? Ditch stocks altogether and focus on funds with stable prices and payouts. My three favorites are currently trading at 7-15% discounts to their net asset values (NAVs) – which means they have limited downside and easy upside no matter what the broader markets do. Plus, they pay secure yields between 8% and 11% annually! They’re the closest thing to a “free lunch” you can get in today’s no-interest-rate-world. Click here and I’ll share my full analysis on these “Bond God favorites” including their names and tickers.