4 “Safe” Dividends That are Anything But

Don’t take any stated yields for granted these days! The financial news has been flooded with dividend cuts lately, with Teva Pharmaceutical (TEVA) and Mattel (MAT) taking the hatchet to their payouts, and telecom Windstream (WIN) dropping its dividend too.

It’s dangerous to buy headline yields – or even supposedly “safe” blue chips with more modest dividends – without looking at the profits funding these payouts. Companies with high payout ratios (how much in earnings, funds from operations and other measures a company pays out in the form of dividends) are a twofold risk:

Let’s call out four stocks with skyrocketing payout ratios. All four are “stay aways” – and the names may surprise you.

Coca-Cola (KO) has been building out its non-cola brands for years – including the likes of Powerade sports drinks, Simply Orange juices and Dasani water – for precisely the possibility that is reality today. Sugary colas are in the crosshairs not just of health-focused Americans, but of governments such as those in Chicago’s Cook County and Philadelphia, which are broadly cracking down via “soda taxes.”

As a result, Coca-Cola and rival PepsiCo (PEP) have suffered 12 consecutive years of cola sales declines. And Coca-Cola specifically is seeing hits to its legacy brand, as well as a decline in even Diet Coke, impact the top and bottom lines.

Is Coca-Cola disappearing anytime soon? Hardly. And similarly, its dividend isn’t about to vanish. But there’s more than one way to kill a retirement, and Coca-Cola’s sin is sloth.

KO’s annual payout hike has slowed to just 2 cents per share, good for sub-6% growth in its most recent increase early this year. That comes courtesy of a high 80% dividend payout ratio of earnings that essentially puts a cap on just how much more Coca-Cola can realistically shell out without a substantial boost in profits. And with earnings projected to shrink this year before growing less than 5% next year … well, don’t expect much out of Coke.

Coca-Cola (KO) Is Running Out of Fizz 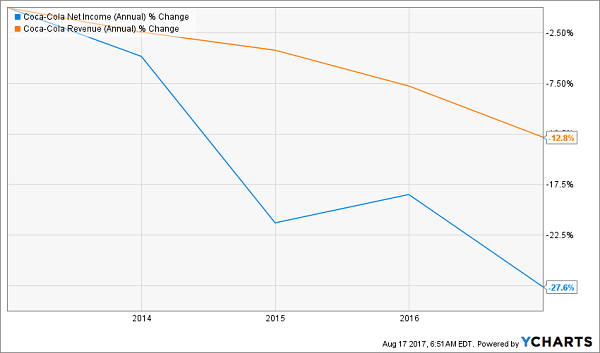 CenturyLink (CTL) is in the same ilk as Frontier Communications (FTR), which cut its dividend a few months ago, and the aforementioned Windstream, which just killed its payout outright. It’s a troubled second-tier telecom that has piled on debt trying to buy up assets – in CenturyLink’s case, Level 3 Communications, an internet service provider – and sits on shaky financial ground as a result.

I will say that CenturyLink’s payout doesn’t look as imperiled as Frontier’s or Windstream’s did before the ax came. While the payout ratio of more than 100% is both troubling and means the company is paying out more than it’s bringing in (in profits), the company has produced sufficient free cash flow to keep things going. Moreover, the acquisition of Level 3 Communications, when baked in, should at least drag that payout ratio into double digits.

But FCF has been on the decline for years, down 35% from three years ago. And the core business has been eroding, leading to soft revenues. This is a company that’s more focused on surviving than thriving right now, which at the very least means CTL’s dividend isn’t going to expand anytime soon. Match that with weak operations that open up the potential for more share-price declines (CenturyLink is off 50% since 2014), and you have a high-yielding dividend trap. 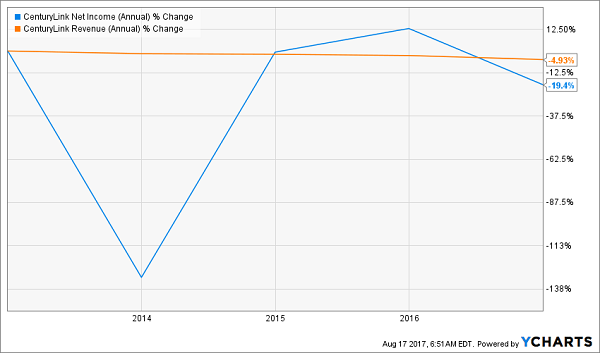 The nice thing about energy pipeline master limited partnership (MLP) Plains All American (PAA) is that there’s not much guesswork in whether the company is going to cut its distribution.

It pretty much telegraphed it.

The company’s recent second-quarter earnings report included reduced profit guidance for the current fiscal year and 2018. Based on its distributable cash flow (DCF) guidance for fiscal 2017 and its current payout, PAA isn’t making enough to cover the distribution bill. But that might not be an issue … only because Plains itself indicated a distribution cut likely was on the way. Per Stifel analyst Selman Akyol:

“Management provided a scenario where the distribution would be reset to $1.80, an 18% reduction, from $2.20 which would imply 1.10x coverage based on management’s 2018 fee-based DCF guidance. In addition, PAA is also evaluating the correct coverage ratio that would allow any contribution from S&L to provide increased coverage to reinvest in the business. In our model we reduced distributions to $0.45 per quarter or $1.80 annualized.”

Translation: The company feels like it can’t even depend on its troubled supply and logistics business. Thus, a distribution cut is all but assured, and for now, share gains look capped as well. 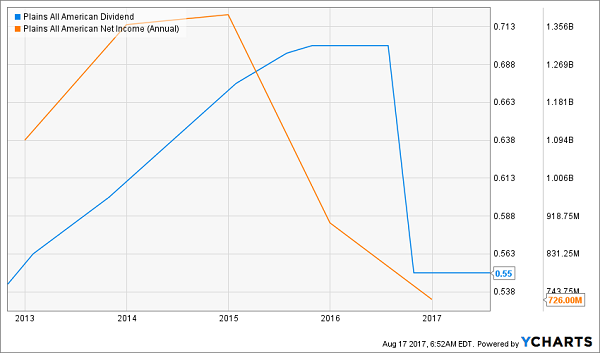 Fashion retailer Guess (GES) should have cut its dividend long ago.

The continued creep of Amazon.com (AMZN) is simply slaying retail, and Guess – a once-iconic retailer best known for its jeans – has been no exception.

While revenues have “only” trickled down by about 15% over the past three years, the bottom line has evaporated. Net income has fallen from $153 million in 2013-14 to just $22.8 million – that’s a decay of 85%! Operating cash flow is down nearly 80%. The company was free cash flow-negative lass year.

You Don’t Have to Guess (GES) How This Will End 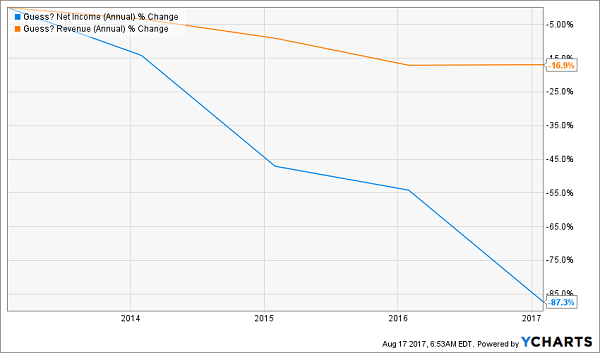 Those results have knocked GES shares down by 50% since this point in 2014. As a result, the company’s yield has ballooned to 7%, but this is a paper tiger of a dividend. Guess has paid out 90 cents per share in dividends over the past year … but only brought in 42 cents in profits!

Guess needs to start worrying about its own survival, and that means cash conservation. This dividend is toast, likely sooner than later.

“Back in the day” it used to be easy for my subscribers and I to make a killing in closed-end funds (CEFs). We had a simple, profitable two-step formula:

Yes, we’ve had fun contrarian times since the spring of 2016. That April, we actually purchased “Bond God” Jeffrey Gundlach’s DoubleLine Income Solutions Fund (DSL) for a fat 11% yield at a 7% discount to its net asset value (NAV). Our savvy purchase went on to crush the broader market, delivering 40.5% returns in just 16 months: 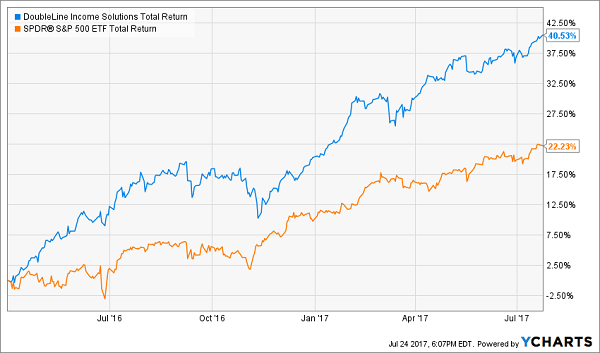 The following month we did it again. We found a 10% payer – issued by the ever-popular PIMCO no less – selling for a 10% discount. And we enjoyed 43.8% total gains from PIMCO’s Dymanic Credit and Mortgage Fund (PCI) in the 15 months to follow: 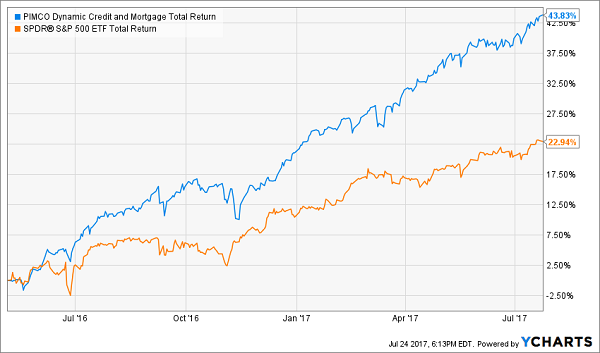 Of course these were easy pickings in hindsight. It’s hard to believe now, but the funds were quite out-of-favor at the time. DSL was dogged by its recent underperformance, while PCI carried the baggage of an investment strategy highlighted (and maligned) in The Big Short.

In the last eighteen months, as I mentioned, CEFs have trended back in vogue. Their discounts have narrowed and yields have compressed. But there’s one double-digit yield left, and it’s fittingly the offspring of a recent Bond God favorite.

Tonight, I’ll be sharing my full research on this “last safe 10% yield to my No Withdrawal Portfolio. If you want to retire on dividends alone, my research will show you ten safe buys paying an average of 7.5%.

Which means a million dollars invested in these stocks and funds will be safe, diversified – and pay you $75,000 annually without you having to sell a share.

And here’s the kicker: Your capital also enjoys 10% upside or better, thanks to the strategy I mentioned earlier.

Are you a current subscriber? If not, why not? We have a 60-day risk-free trial that will let you cancel and get your modest $39 investment back (no questions asked). AND I’ll let you keep all of my research for free.

Which means your downside is zero, and your upside is a secure, prosperous retirement funded by safe 7% to 8%+ dividends. Click here to get started and I’ll explain more about my no withdrawal approach – plus I’ll share the names, tickers and buy prices of my three favorite closed-end funds for yields up to 10%.