Dividends or growth? Why choose when you can have both.

Take these firms with broad business moats and sustainable competitive advantages. They’ve showered their shareholders with raises over the past five years, delivering dividend growth from 100% to 1000% or better! 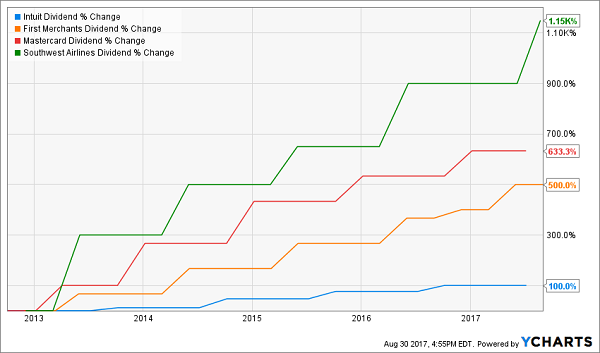 Yet these stocks still have modest current yields. Why? Because their share prices have soared along with their payouts: 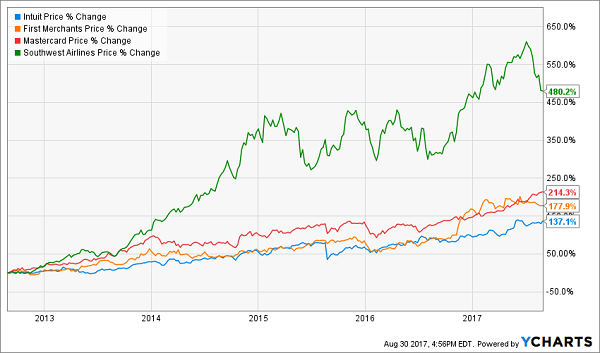 Everyone loves the dividend, but as you can see, investors usually don’t give enough love to the dividend hike. Not only do these raises increase the yield on your initial capital, but also they often are reflected in a price increase for the stock.

For example, if a stock pays a 3% current yield and then hikes its payout by 10%, it’s unlikely that its stock price will stagnate for long. Investors will see the new 3.3% yield, and buy more shares. They’ll drive the price up, and the yield back down – eventually towards 3%. This is why your favorite dividend “aristocrat” – a company everyone knows and has paid dividends forever – never pays a high current yield. Its stock price rises too fast!

Here are five payouts growing faster most others on the planet today:

Many people know Intuit (INTU) through its various suites of accounting and tax software, including TurboTax and QuickBooks, as well as professional tax program ProConnect and personal finance manager Mint.

And the number of people familiar with Intuit is growing like a weed.

In fiscal 2017, which just wrapped up July 31, the company’s QuickBooks Online swelled by 58% to nearly 2.4 million subscribers, up from 41% growth a year ago. That was made up of an impressive 53% growth here in the U.S. – and  75% internationally! All told, that drove 13% revenue growth for the year, while Consumer Tax (TurboTax) and ProConnect saw sales climb higher by about 9%.

2018 looks like it should be another bumper year, with the company projecting high-single-digit to low-double-digit expansion across all its major financials.

Intuit also took time out of its fourth-quarter report to hike its dividend by 15% to 39% – a well-covered payout that amounts to just about 30% of its projected 2018 profits.

Taxes and accounting might put you to sleep, but Intuit’s one-two punch of dividend growth and potential capital gains are simply stirring.

You’re probably not going to be too familiar with this one, and if you are, it’s likely under the company’s forward-facing banners: First Merchants Bank, Lafayette Bank and Trust, and First Merchants Private Wealth Advisors. There’s nothing special about its operations – it provides basic services such as checking and savings accounts, plus mortgages and auto loans that actually pay the bills. It’s not big, either, at about 106 locations – compare that to about 4,600 for Bank of America (BAC).

But it is growing, having gobbled up other small banks in Indiana and Ohio in 2017 alone. And despite its aggressive M&A, it still has plenty of cash in the coffers to reward its shareholders. Its 18-cent quarterly dividend translates into a mere 30% payout ratio, and First Merchants hasn’t been shy about bringing its dividend back in line with pre-crisis levels.

This might not be the first or even 10th place you’d think to look for a dividend dynamo, but income growth can come from all corners of the market.

Chances are you use your credit card most everywhere, and you probably think the rest of the nation and maybe even the world acts the exact same way. We’re getting there, but there’s a lot of daylight between now and then.

Global market research company Euromonitor said in late 2016 that global consumer card payments were on pace to surpass cash for the first time ever. And card payments will keep growing, at a compound annual growth rate of 6.6% between 2016 and 2021, versus just 1.3% CAGR for cash payments. That’ll trend will be heavily driven by e-commerce as developed and developing markets alike are increasingly connected and comfortable with online shopping.

MasterCard, along with rival Visa (V), are the two top names in the payment processing space, with the former generating 16 billion switched transactions in Q2 2017 alone! Moreover, MasterCard’s aims are ambitious, with the company stating a “financial inclusion goal of connecting 500 million unbanked consumers by 2020,” and already having connected “more than 300 million to the financial mainstream.” That’s not coming just via brick-and-mortar swipe and chip points, but also through its MasterPass system, which included nearly 340,000 online and in-app merchants at the end of fiscal 2016.

That expansion is filtering down to its shareholders in spades. Not only have MA shareholders enjoyed a 215% run over the past half-decade, but the dividend has doubled since 2014. And MasterCard has a wide berth, paying out just 20% of its profits in the form of regular distributions, meaning you can expect continued generous payout growth for years ahead.

Southwest Airlines (LUV) is something of an in-betweener. It plays well as a low-cost carrier, using competitors such as United Continental (UAL) and American Airlines (AAL) as its evil “big brother” foils despite it being a legitimate major carrier that covers the U.S., Mexico, Caribbean and Central America. Southwest is expanding, too, recently announcing that it will be bolstering its presence California as well as Mexico as part of a new flight service plan that includes roughly 20 new nonstop routes.

But it’s also several steps above the likes of cut-rate sky-bus operators such as Spirit Airlines (SAVE) and Frontier Airlines, and in fact frequently is at the top of satisfaction surveys, and even sits atop J.D. Power’s survey of low-cost carriers for 2017.

This combination of offering low costs to bring customers in, and keeping them by not treating them like garbage – a difficult line to toe in the airline industry, apparently – has made Southwest a profit machine. In fact, LUV has the distinction of being the only major U.S. carrier to have avoided bankruptcy proceedings.

Southwest’s profits have exploded in the past few years, and top-line expansion, while less robust, has been steady. As a result, LUV has been plenty comfortable offering up a modest but blossoming dividend that represents just 13% of its estimated 2017 profits.

With Southwest’s dividend, the sky’s the limit.

Royal Caribbean (RCL) has thrived over the long-term despite a maelstrom’s worth of headwinds. From the Costa Concordia disaster in 2012 to rival Carnival’s (CCL) “poop cruise” in 2013 to a 2016 crash bred from sky-high expectations facing a less stellar reality, RCL hasn’t exactly been a journey through calm waters, but it gets the job done.

In fact, Royal Caribbean’s 47% gains in 2017 are more than quintuple the S&P 500’s year-to-date returns, and the cruise operator is sitting on 370% returns over the past five.

So why the love affair?

Royal Caribbean is one of many stocks enjoying the fruits of the expanding “experience economy,” with people increasingly choosing to spend their discretionary not on things, but experiences. Naturally, that has been a boon to a number of travel-oriented stocks.

RCL has boasted a smooth ramp-up in the top line over the past few years, but the bottom line is simply eye-popping, with 2016 net income of $1.28 billion representing a 170% boom from 2013 levels. Wall Street’s pros expect a similar path ahead, with estimates of modest single-digit revenue growth but profits that should swell by 40% between 2016 and the end of 2018.

A 3-Step Process for 12%+ Returns per Year, Forever

The very best dividend stocks never show high yields (like AT&T) because their prices keep rising in line with the increasing payments.

Most people never realize any of this.

But those of us who DO stand to profit handsomely and almost automatically!