Energy stocks are en fuego again after a drone strike on a Saudi oil facility. We’re going to (as usual) skip the geopolitical talk and discuss oil dividends that will benefit from this disruption.

While “buy and hope” investors ponder basic ways to play the spike, you and I know that about half of energy returns come from payouts. Check out the orange line below, the total return of a popular energy index with dividends. It’s nearly double what the stock prices themselves returned: 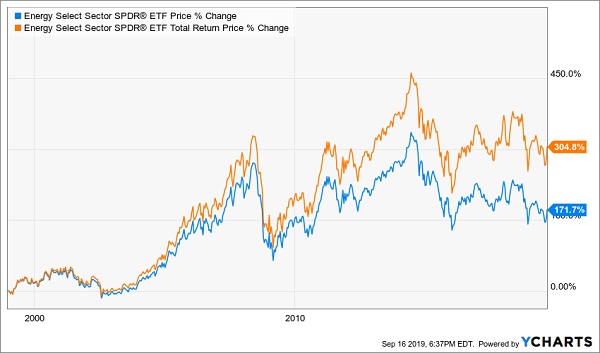 No dividend is guaranteed forever. But broadly speaking, income has been a far more reliable source of energy-sector returns than price performance, making up nearly half of energy’s total returns since late 1998.

Brad Sorensen—head of market and sector analysis the Schwab Center for Financial Research and a member of Schwab’s Investment Strategy Council—smartly summed up the mind-numbing task of trying to invest in the energy sector in a recent outlook:

“There are myriad shifting winds affecting the energy sector, making a firm call in either direction difficult. Geopolitical events are unpredictable and often affect the energy sector, which should be taken into account along with the fundamentals of the group.”

Energy is always being knocked around by “myriad shifting winds.” But the dividends are very real, and have in fact helped salvage what has otherwise been a disastrous decade for the energy sector. Here’s a look at West Texas Intermediate crude prices over the past 10 years: 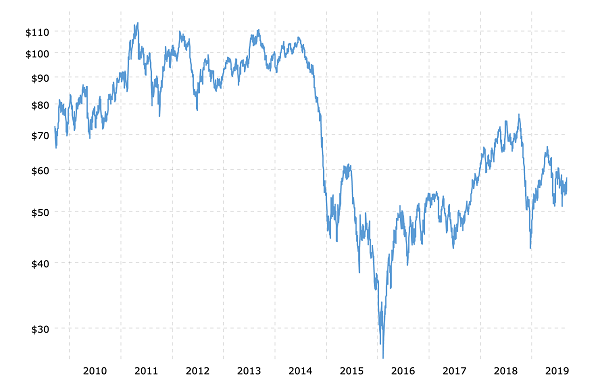 That should translate into pretty modest returns for energy stocks over the same time, and indeed, it does. But dividends have tripled the returns investors would’ve received from price performance alone: 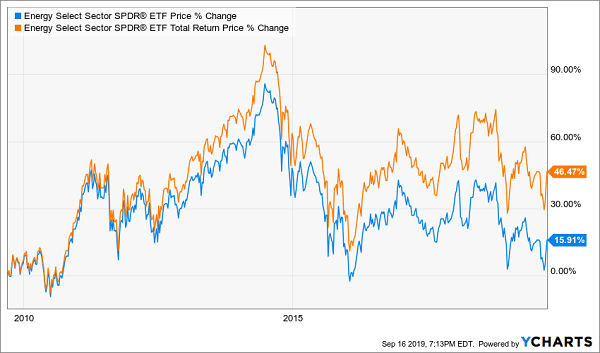 The only saving grace? The yield on the sector has ballooned over the past few years thanks to energy’s misfortunes, making it the highest-yielding sector in the S&P 500—and a potential contrarian play.

Energy Even Has REITs and Utilities Beat 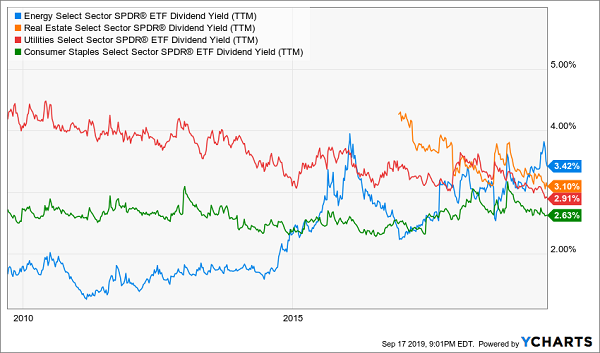 These dividend machines finally have a bit of, ahem, fuel to drive their stock prices higher. So let’s wade through the oil patch together and pick through five payouts (yielding up to 8.5%) that will benefit from an extended oil spike.

I recently highlighted Exxon Mobil (XOM) for its stability and bulletproof dividend, the latter of which is the picture of health, according to the DIVCON payout rating system. This Dividend Aristocrat has raised its payout for 37 consecutive years, which includes a couple of severe dips in oil prices. Management clearly views the dividend as one of its top priorities.

But that stability? It can cut both ways.

Exxon Mobil is an integrated oil major, which means that it’s more than exploration and production (E&P)—the segment that’s tightly locked to oil prices. It also has other operations, including refining, which is more dependent on the “crack spread” (the difference between the price of a barrel of oil, and the costs of turning it into petroleum products). Indeed, no matter which direction oil is heading, XOM always appears to be torn in both directions.

Just consider the nearly 15% jump in oil Sept. 16 as the market responded to the Saudi attacks. E&P players such as ConocoPhillips (COP) and EOG Resources (EOG) jumped on the spike. Exxon Mobil? More reserved. 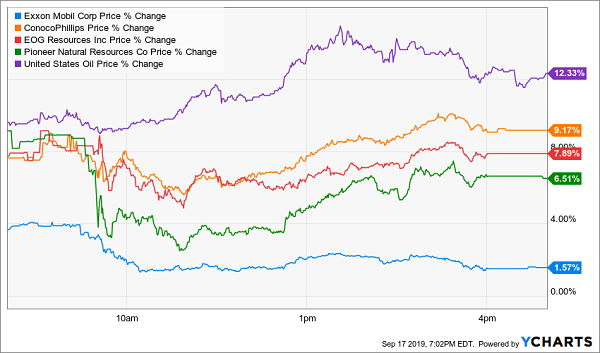 This dynamic has made XOM a frustrating holding from a growth standpoint. In fact, this energy titan is almost breakeven over the past decade thanks to weakness since the 2014 oil-price crash.

The only meaningful source of returns? 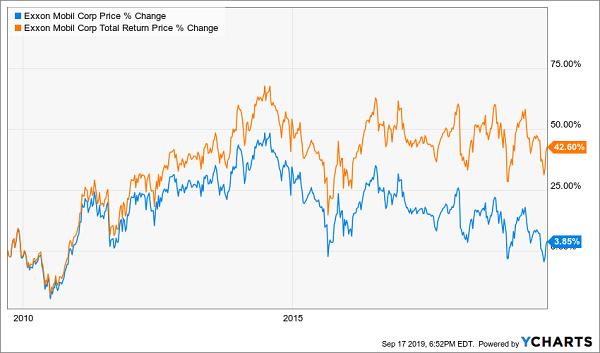 Price upside isn’t everything, but you have to get something. Let’s look for more fertile ground.

Enterprise Products Partners LP (EPD) has been a much easier stock to hold over the long haul, for several reasons.

First and foremost: EPD is a pipeline company, not a driller. Its operations include more than 49,000 miles of natural gas, nat-gas liquids, crude and other pipelines, not to mention storage facilities, nat-gas processing plants, even import/export terminals.

In short, it’s a “toll taker” whose fates are more closely tied to how much gas and oil is pumping through its infrastructure than the pure price of those energy commodities. That insulates it somewhat from price fluctuations.

That alone has given EPD shares a more respectable price performance over the past decade, nearly doubling in that time. That still doesn’t hold a candle to the S&P 500, but that brings me to the real reason to own EPD:

Enterprise Products Partners is closing in on Dividend Aristocrat status with 21 consecutive years of dividend growth. But what sets EPD apart is that it’s not content to spread the wealth once a year. It improves its distribution each and every three months, and has done so for 59 consecutive quarters.

Add in the dividend, and it more than doubles EPD’s performance over the past decade, putting its returns on par with the market, and several times better than the broader energy sector.

EPD: Where Cash Is King 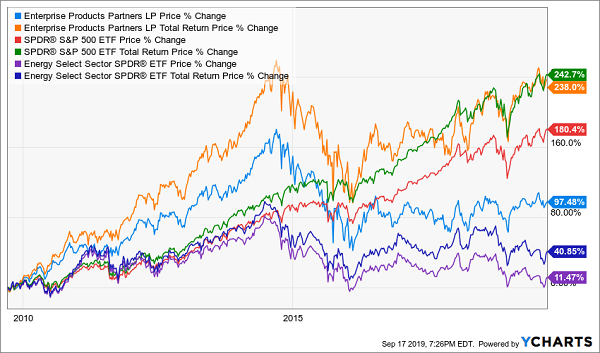 If MLPs are so grand, why not diversify by holding a couple dozen of them in a fund?

That’s the logic behind buying the Alerian MLP ETF (AMLP), which is the largest MLP-focused ETF on the market at more than $8 billion in assets under management. Its tight portfolio of 23 MLPs includes EPD among its top holdings, as well as Plains All American Pipeline LP (PAA), MPLX LP (MPLX) and Magellan Midstream Partners LP (MMP).

It’s a decent idea in theory, but in practice, I spy a couple of flaws.

For one, this indexed ETF simply has no way to exploit values in the MLP space, no way to gauge growth potential in a few outliers, and so some of its components simply hold it down. 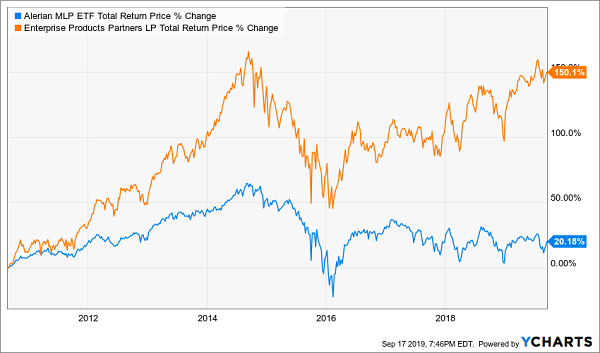 The problems compound when you consider that AMLP isn’t actually an ETF, but instead a C-corp that tracks Alerian’s MLP Infrastructure Index like an ETF. While AMLP boasts that investors can skip the bothersome K-1s that traditionally come with owning MLPs, it also carries with it a considerable and complicated tax burden.

As a result, investors since inception have received less than half the performance of the index AMLP is supposed to track!

I often suggest finding superior closed-end fund (CEF) alternatives to middling ETFs. This time’s no different. Here are a pair to consider.

Let’s start out with Tortoise Power & Energy Infrastructure, which offers some similar attributes to AMLP:

But on that last point: How TPZ goes about providing that exposure is far different than AMLP.

The big difference is that Tortoise’s management actually splits the fund roughly 50-50 between equities and fixed income. For instance, Energy Transfer LP (ET) is the top holding at 5.2% of the fund. No. 2? The Williams Companies (WMB) … but we’re talking about its fixed income, not its stock.

The equity portfolio is only about a quarter true MLPs, with the rest in C-corps/LLCs (73%) and even a little preferred stock (4%). The debt portfolio is shorter-term in nature, with two-thirds invested in bonds with a duration of five years or less.

To top it all off, TPZ uses a healthy amount of leverage (roughly 30%) to juice its returns.

Yes, you’re paying a management fee of 0.95% that’s a little higher than AMLP’s 0.85%, and Tortoise’s fund still has to wade through some tax issues. But TPZ does a far better job of justifying those expenses. Better still, it trades at a nearly 8% discount to NAV, so you’re buying these energy assets for 92 cents on the dollar.

Tortoise Runs Circles Around the Index 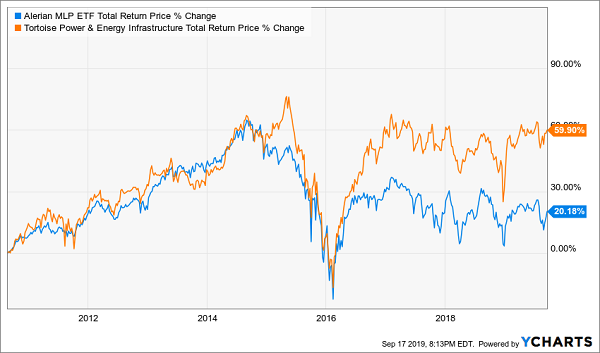 First Trust Energy Infrastructure, which also yields more than 8%, uses a fair deal of leverage (25%) to get results. And it’s actually a sweeter deal than TPZ at the moment, trading at a whopping 10% discount to NAV.

This relatively new fund only came to life in the back half of 2011, but since then, it has put AMLP to shame. That certainly justifies management’s fees (1%), as well as the other operating expenses that come with a fund like this. 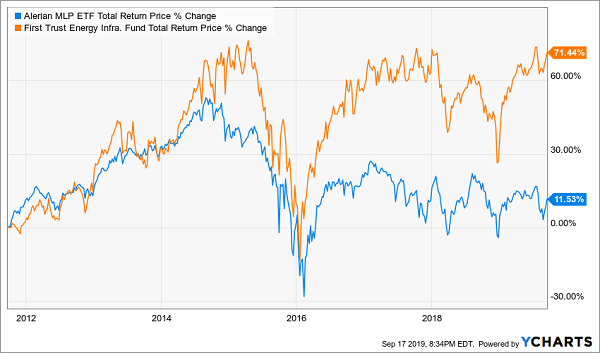 But no matter how “insulated” any of these plays are supposed to be from energy shocks, the charts don’t lie: Plunging oil and gas prices will send them into a tailspin.

This isn’t the market environment to make risky gambles in a desperate grab for income. We’re in the back half of a bull market that’s extra-long in the tooth, and numerous global risks are converging on this fragile market.

Big yields mean nothing if you’re not protecting your hard-earned nest egg, too.

And that’s precisely the inspiration behind my 5-stock “2008-proof” portfolio, which I’m going to GIVE you today.

With the Dow regularly lurching a stomach-churning 1,000 points (or more) in a single day during pullbacks, I’m sure a safe—and growing—7.5% every single year would have a lot of appeal.