There’s almost certainly a recession on the way, and we closed-end fund (CEF) investors have a big edge over mainstream investors.

That edge is our high, reliable (and often monthly) CEF dividends. Thanks to those mighty payouts (the average yield on our CEF Insider service’s portfolio is 9.9% today), we can bide our time, collect our dividends and buy bargain-priced CEFs on the dips.

In fact, we don’t have to wait long: I’ll give you a conservative CEF pick to consider below that yields 9%, holds oversold large cap tech stocks, like Microsoft (MSFT) and Apple (AAPL), and is a bargain, to boot.

But first, what about this recession everyone’s talking about? Certainly, it’ll be the most telegraphed recession in our lifetimes. And there’s another recession-related detail you may have heard lately: that the “yield curve” is more inverted than it’s ever been.

Many folks take that to mean the coming recession will be worse than any we’ve experienced. But is that true? To get at the answer, let’s look at what an inverted yield curve is and what it means for a likely 2023 recession. Then we’ll discuss that high-yielding (and attractively valued) CEF I mentioned a second ago.

When people talk about the inverted yield curve, they’re referring to the rare instances when yields on shorter-term Treasury notes (I look to the three-month Treasury when considering yield curves) are higher than yields on long-term, or 10-year, Treasuries.

Every time this situation occurs, a recession happens within the next 24 months, and usually within the next 12 months. And now, as many pundits are saying, the difference between the 10-year and 3-month yield is bigger than it’s ever been: 83 basis points.

On the surface, that sounds like it could mean 2023’s recession will be deeper than anything we’ve seen. But a quick look at history suggests that the size of the inversion doesn’t matter. 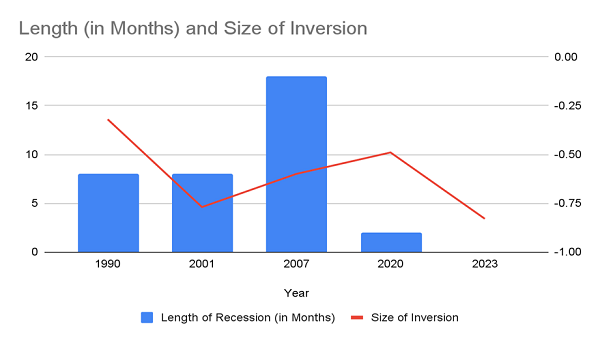 For example, as you can see above, we’re just six basis points above the 2001 recession, which lasted eight months, while the smaller inversion in 2007 (23 basis points) saw an 18-month-long recession. So yes, we have a heavily inverted yield curve, but that doesn’t mean we’ll necessarily have a nasty recession next year.

Another question you may be asking is that if our yield curve inversion is similar to 2001, should we worry that a repeat of that year is afoot? That might seem especially likely, as the implosions in crypto and some tech stocks, like Meta (META) and Snap (SNAP), make it feel like a rerun of the dot-com bubble.

Except things are very different now than they were 21 years ago. 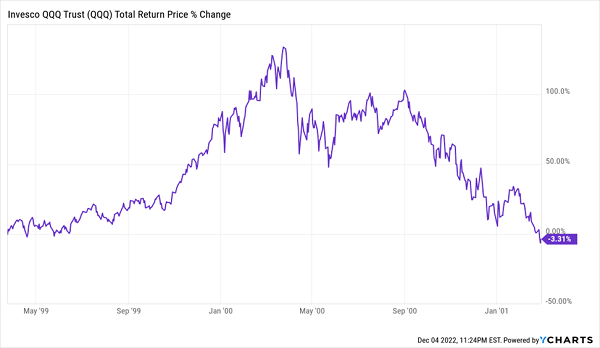 In 2001, stocks did start to fall a few months before the recession began. But if we zoom out, we see that the preceding run-up back then was far beyond current trends. 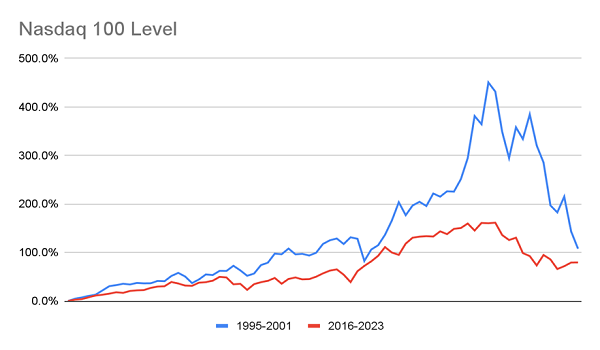 Back in 2001, the NASDAQ 100 soared over 400% in a chart that looks more like that of a cryptocurrency today than of the stock market (blue line above). Therefore, the NASDAQ’s huge decline going into the 2001 recession made sense.

The red line, which represents the last few years going into the forecast 2023 recession, tells a different story. Yes, things obviously got a little crazy in 2021, when that big bump begins. But the recent selloff means we’re just back to the trend line we deviated from when the pandemic hit.

But crucially, this chart tells us we’re nowhere near a burst-bubble market, which also means the NASDAQ’s miserable dot-com bubble performance (falling 80.2% from the top!) is unlikely to happen again.

A Prudent Way to Invest for a 9% Dividend

In any event, if you are still uneasy about this market, I fully understand. Luckily, there are ways to get exposure to stocks with a bit of insurance and a 9% dividend yield. One of them is a CEF called the Nuveen NASDAQ 100 Dynamic Overwrite Fund (QQQX), which, as the name says, holds the stocks in the NASDAQ 100 index.

Let’s start with the valuation: QQQX does trade at a premium to net asset value (NAV)—2.6%, in this case—but it’s been much more expensive in the past, particularly when a rate hike-cycle is ending, and investors anticipate a recession:

The Last Time Rates Soared, QQQX’s Premium Did, Too 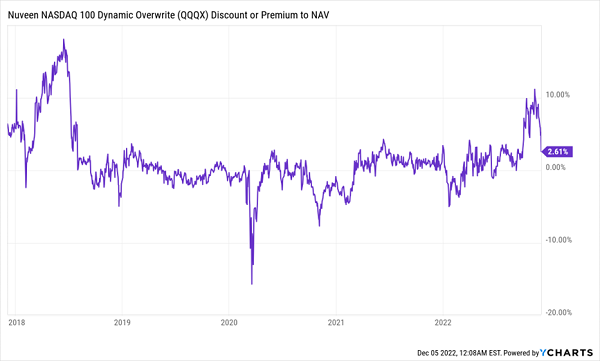 Look at the left side of that chart: in 2018, near the end of the last rate-hike cycle, QQQX’s premium soared to over 10%, a feat it repeated this year, when similar demand for the fund pushed its price up. Now that that premium has fallen a bit, QQQX is another compelling option for income and upside.

Speaking of income, as mentioned, the fund yields 9%, but there’s another twist: that payout is backed by QQQX’s covered-call strategy. Essentially, the fund sells investors the option to buy its stocks at a fixed price and a fixed date in the future. No matter whether these deals go through, QQQX keeps the cash it charges for these options. It’s a terrific way to earn extra income on a portfolio, and it works particularly well in volatile markets. These option sales also help stabilize the fund, because it earns more of its return in cash.

Put it together and you’ve got upside potential from beaten-down tech stocks, a bit of downside insulation from these firms’ low valuations and QQQX’s covered-call strategy and an income stream that’s likely to hold up, no matter what 2023 throws at us.

Now is a perfect time to buy the 4 other “recession-resistant” CEFs I’ve uncovered. This quartet boasts a near-10% dividend yield and all of these funds trade at healthy discounts today. In fact, they’re so undervalued that I expect them to shake off a 2023 pullback and be up 20%+ a year out from now.

I want to share my research on these 4 funds with you. Click here to get these 4 funds’ names, tickers, current yields and more in a free Special Report.