Worried that potential impeachment trials are going to pressure your retirement portfolio? It’s a fair concern. So, let’s talk about ways to protect our stocks and bonds from political drama.

First, let’s dispel the myth that the news drives the markets. Markets are smart, and they usually “sniff out” eventual outcomes before they become obvious to the broader public. They benefit from the wisdom of crowds, watching as individual market participants who “know something” put their money where their mouth is by buying or selling.

My favorite example is from World War II. Former hedge fund manager Barton Biggs, author of the excellent Wealth, War and Wisdom, notes how the stock market amazingly identified in real-time that the Battle of Midway was the turning point of the war for the US. Mr. Market outsmarted financial commentators, who made no mention of the historic bottom at the time! 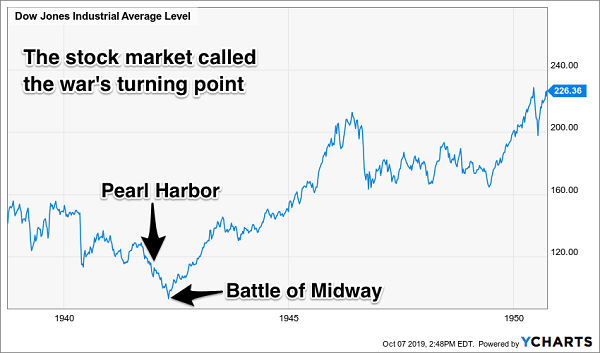 Today’s geopolitical climate is quite calm by 1942 standards. But in the age of 24-hour news, “something” is always leading the cycle. And currently, it’s the potential impeachment of President Trump.

Now, our beat here is payouts, not politics, so we’ll keep the discussion focused on markets and dividends as usual. And yet again, for the umpteenth time in history, the markets have anticipated this news item.

The S&P 500 most recently peaked on September 12. (Coincidentally, the day of our most recent Contrarian Income Report subscribers-only webcast! Perhaps I am to blame for the last three weeks of market action.) Eleven days later, Trump’s impeachment odds spiked (per prediction market site PredictIt).

Don’t Believe Everything You Read Online… 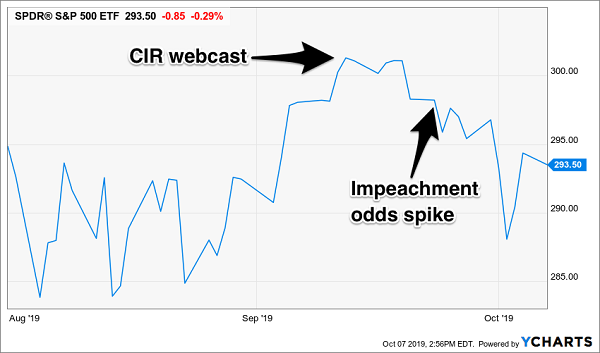 As I write, the degenerate gamblers market participants betting real money with PredictIt on political outcomes are pricing in a 70% chance that Trump is impeached during his first term, but only a 19% chance that he is removed from office. As far as the markets are concerned, this story is not yet as big as it’s being made out to be.

This is a good reminder for anyone who follows the day-to-day news cycle. If you are wondering whether or not something is a big deal, see how the markets are reacting to it before you get too worked up about it. And for you political junkies, a site like PredictIt will give you a more accurate and specific prediction than you’ll get from any analyst in terms of impeachment odds, 2020 candidates or even future Supreme Court rulings.

Back to our beat, by mid-September, stocks were indeed due for a pullback. If you subscribe to my CIR and/or Hidden Yields services, you know that we’ve been content to sit on our hands lately, for a couple of reasons.

First, the “dumb money” was quite confident as recently as a few weeks ago. When we took to the air for our webcast on September 12, our friend Jason Goepfert reported near-joyous 74% confidence from the first-level investors that you and I prefer to fade. Check out the correlation between their confidence levels below (red line) and the S&P 500 (gray line):

When Dumb is Confident, Be Careful (September 12) 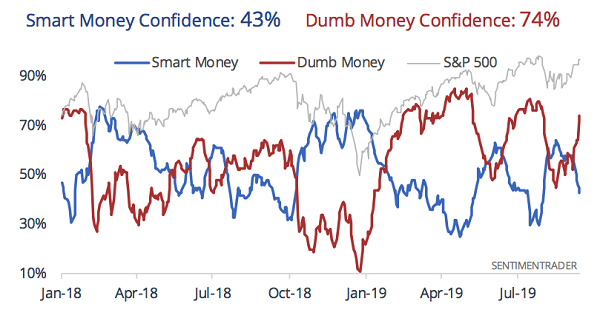 Second, the “machines” had stopped buying, which meant they were gearing up to start selling. If you read The Economist last weekend, you probably saw their cover story featuring the rise of computers on Wall Street. There are claims that humans now manage less than half of the money in the stock market. I think that’s a bit of an exaggeration (thanks to some generous categorization of machine-money) but I do think the point is valid.

This is great news to creative contrarians like us. ETFs and “rules-driven funds” create a vacuum of original thought in the investing world. It is not that hard to figure out what the machines are doing at any given moment.

Three weeks ago, they began to sell. Roughly speaking, they tip themselves off by sending more and more stocks to new lows while bidding up less and less stocks to new highs. I track this pendulum daily (so that you don’t have to) to get a feel for the temperature in the “machine room.”

As I write, the robots are still selling more than they are buying. However, the “dumb money” sentiment has cooled off a bit thanks to three down weeks in a row. This means stocks are actually less risky to buy today than they were during our CIR webcast.

It’s a good time to enjoy the autumn weather and pick some apples. But if pumpkin carving isn’t for you, and you can’t stand to watch your portfolio edge lower either (even if you aren’t selling, which you shouldn’t be) then we’ll discuss one final tip to keep you in good spirits through Halloween.

You’ve probably heard of “low beta” stocks, or shares that tend to zig (or at least, zag less) when the stock market zags down. There have been studies showing that certain low beta strategies can produce good performance with low drama, and many funds including ETFs have begun to buy these types of stocks.

I’ll leave low beta for the first-level machines. You and I can relegate beta all the way to the basement with stocks like TFS Financial (TFSL). Since we added it to our CIR portfolio on May 3, it has not dipped underwater regardless of day-to-day action in the broader market:

Our Basement Beta Bank Sails Along 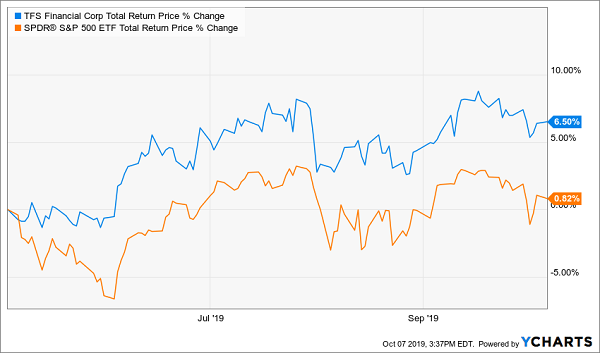 And why should this stock ever go down? Granted, on paper, TFS looks expensive for a bank. Most websites say it trades at a “nosebleed” 2.6-times book value and 56-times earnings, while its peers trade between 1 and 1.4-times book and 10 to 15 times earnings.

(Book value is a popular valuation measure for banks because most of their assets and liabilities are marked to market. It’s often thought of as the bank’s liquidation value. So, this is the closest thing to a free lunch we’ll ever see on Wall Street – and, ironically, from sleepy thrifts that service Main Street.)

TFS tripped up its reported book value when it minted money by taking advantage of a financial event for small banks known as a conversion. If you’re not familiar with conversions, think of initial public offerings, or IPOs. In these events, companies put their shares up for sale to the public for the first time and get cash back in return.

Conversions are similar – but some small private banks choose to go public in two steps instead of one. This means that in lieu of selling all shares to the public, they’ll sell some in a “first step” while keeping the rest in what’s called a mutual holding company (MHC). Several years later, the bank will complete the “second step” of the conversion and sell the MHC’s stake to the public.

TFS is in between these steps, and it already has more money than it knows what to do with. So, the firm is hiking its dividend as fast as it can and buying back shares to boot. Its price-to-book looks out of whack because the MHC still holds most of the shares.

Which means this stock is trading for just 10-times earnings, one-half book value and yielding 6.1%.

It’s a near-perfect retirement buy right now, as this stock will help you 3X the dividend you’d receive from a blue-chip payer. However, I like to take advantage of pullbacks like these to lock in 4X yields, which means dividends that are 8% or higher.

To do so, I leverage three perfect income vehicles that most first-level humans and machines have little knowledge of. (Well, to credit the computers, they do know about these vehicles. But they toss around too much money to invest in them. That’s bad for them and their keepers, but good for us individual contrarians managing our own accounts.)

Let me tell you a bit more about my Perfect Income Portfolio strategy right here.