On the lookout for safe dividends? (Who isn’t, right?)

These days, you generally have three options: large-cap stocks with long dividend histories, municipal bonds and US Treasuries.

Treasuries are considered the safest of that group, and large-cap stocks the riskiest, but they’re still much safer than plenty of other investments, such as small caps and junk bonds.

I’ll show you two low-risk investments that are great buys now in a moment. But first, I want to tell you why recent events have called the safety of some of the options I just named into question.

Let’s start by looking at the following chart: 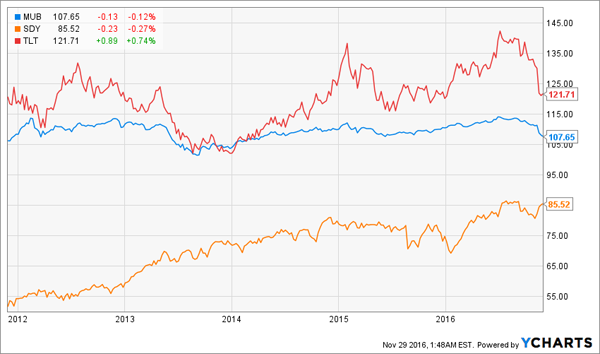 First, note how the iShares S&P National AMT-Free Municipal Bond Fund (MUB), a good proxy for municipal bonds as a whole, is the least volatile of the three funds shown above. But right now, it faces a steep downturn relative to its earlier stability.

That should immediately get our attention and make us think that this relatively stable asset class is facing a bit of a panic, making it worth a closer look.

But where should we diversify beyond munis, if we want safety and low volatility?

My biggest takeaway from this chart is that I don’t buy into the supposed safety of the iShares 20+ Year Treasury Bond Fund (TLT). If you bought this fund five years ago, you’d be down 1.7% today.

Yes, the dividends make up for that, but at a 2.5% dividend yield, versus 2.4% for the SPDR S&P 500 Dividend ETF (SDY), you’re not really getting compensated for that loss; had you invested in SDY instead, you would’ve had pretty much the same income stream and no capital losses. In fact, you’d be up over 60%.

This makes a compelling case to buy SDY—in 2011. But future returns are likely to be different … very different, in fact, because 2011 to 2016 has been an unusual period in history—and it’s nothing like what we’re about to face. 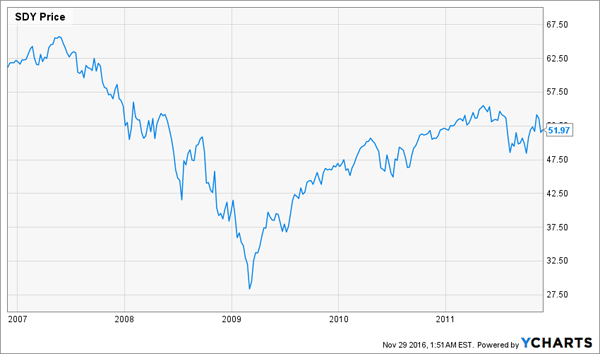 In fact, five years ago, SDY was still halfway through recovering from the meltdown and wasn’t yet back to its pre-crisis highs. That made a further price rise likely in 2012–2015, as long as GDP growth and corporate profits were improving. And they were: 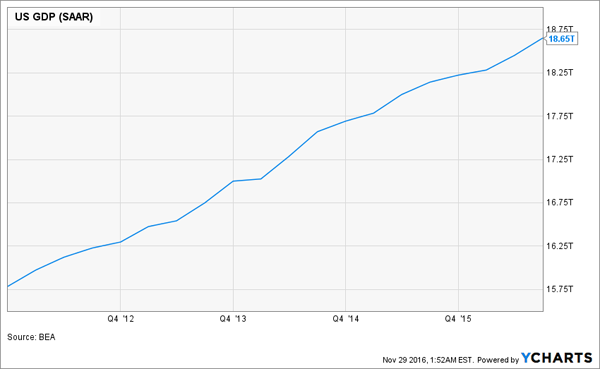 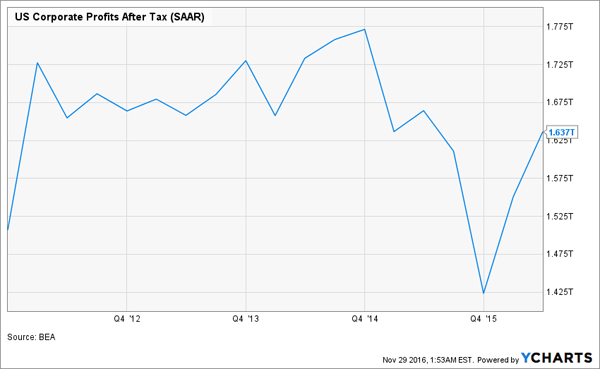 Corporate profits rose 18% from 2011 to 2014, then stalled late that year because the energy sector saw its profits turn to massive losses.

That skews the picture; 96.8% of SDY’s assets are outside of energy, so corporate profitability, as far as SDY’s constituents were concerned, has been on a steady upward climb from 2011 to today. It’s no wonder the fund delivered such a strong return.

The story will be much different between now and 2021, however. GDP growth may continue to rise, and corporate profits are going to go up, too, but we need to remember a major cause of stock-price growth over the last five years: the Federal Reserve.

The last five years saw stocks get more expensive, thanks to quantitative easing, which drove Treasury yields down and forced more investors into stocks, driving up the S&P 500’s price-to-earnings ratio: 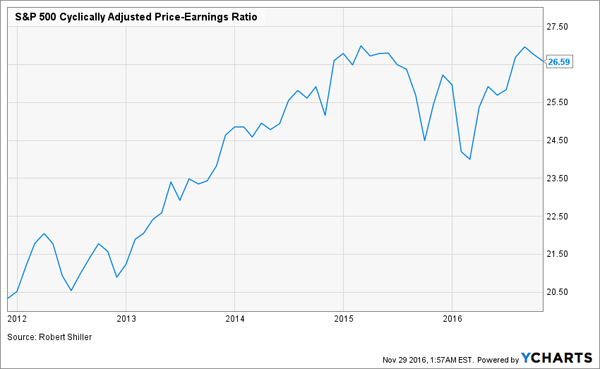 Investors are now paying 30% more for corporate profits than they were five years ago. What’s worse, the QE gravy train is over, as the Federal Reserve has made repeated hints that QE is no longer appropriate for the American economy.

That means a key driver of stock-price growth is gone, changing the picture for the five years ahead.

To be clear, this doesn’t mean you should avoid SDY and dividend stocks, but it does mean you should complement them with lower-risk alternatives, like municipal bonds and Treasuries. This is especially important today, with these asset classes offering negative, or near-negative, returns: 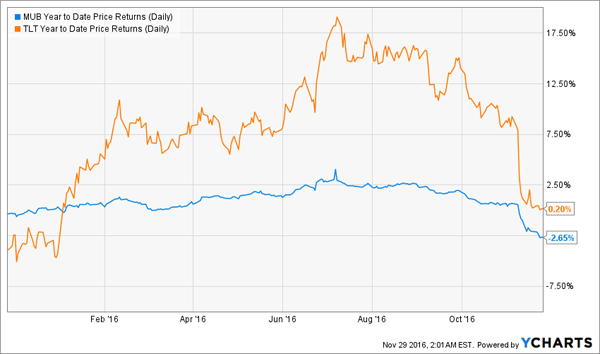 The lack of interest is, paradoxically, making these assets safer; they’ve fallen in price as the market prices in President-Elect Trump’s economic moves, future inflation expectations and the Fed’s soon-to-be-announced interest rate hike.

Once that hike is out in the open, a wave of relief will strike the markets and cause these assets to correct.

The bottom line? You can buy them at a hefty discount right now.

But MUB and TLT aren’t the best ways to play this game. For municipal bonds, you should instead choose the Eaton Vance Municipal Income Trust (EVN), which trades at a 5% discount to its net asset value (NAV) and boasts a 5.8% dividend yield.

I like this fund for one simple reason: it’s oversold. 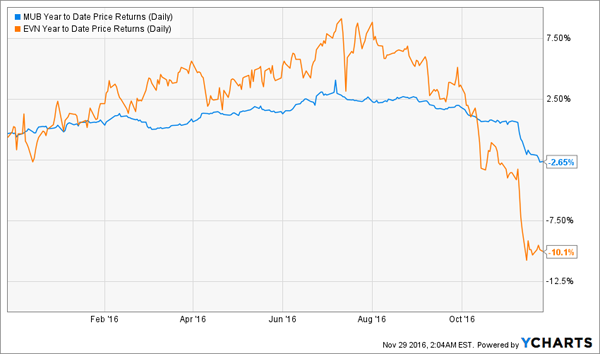 You can see how EVN is a bit more volatile than MUB, in part because of its use of leverage, but its returns weren’t so wildly different from MUB’s until a few weeks ago. Now its 5% discount is far from its average 1.5% premium to NAV. I’m expecting a 6% upturn in the fund when munis hit their bottom and the market starts to give some relief to this oversold asset class.

When it comes to ultra-safe US-issued bonds, I think the volatility in TLT and the inevitability of stronger inflation in the near term make it a bad choice. Instead, if you’re looking for a liquid, low-volatility federal bond fund, consider the iShares TIPS Bond Fund (TIP), which invests in inflation-protected Treasuries. 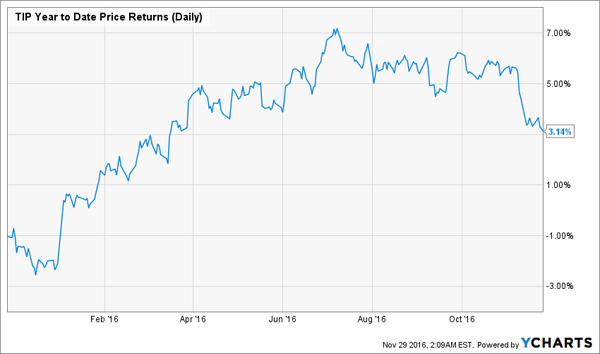 The fund is up 3% for the year but was up over 7% earlier this year, when the market quite rightly was expecting inflation to accelerate in 2017 and beyond.

Inflation expectations are still high, but a flight from safety in the recent Trump euphoria has caused investors to wrongly sell this fund. That makes now a good time to buy.

TIP and EVN are strong buys if you’re looking for safe income at a good price. But they still don’t pay enough to make it into our $500,000 “No-Withdrawal” retirement portfolio.

As the name suggests, this powerful collection of investments is designed to throw off enough income for you to retire on dividends alone—without having to touch a penny of your capital.

And you don’t need to be a millionaire to do it. Not even close.

The key is the portfolio’s 8.0% dividend yield, which would kickstart a $40,000 income stream on $500,000. It’s built on 6 rock-solid investments that hold their own when markets tumble and rise faster than your typical S&P 500 stock in a rebound. That’s a far better approach than putting $500,000 in just two funds—no matter how “safe” they are.

I can’t wait to take you inside our strategy, including the 6 ignored investments that back it up. You can either buy all 6 now or cherrypick the highest yielders, which throw off payouts all the way up to 11%! Simply click here now to get all the details, including the names of all 6 of these high-income wonders.