There’s no way around it: the S&P 500 now has a P/E ratio of more than 26 going into the first earnings season of 2017, and even the “safest” bets are starting to look scary.

Unless we see massive profit growth all around, there’s a real risk this bull market is going to stutter—or worse.

So where do you go for value? It’s getting harder than ever, but there is one corner of the market that got way ahead of the S&P 500 and has since taken a step back. I’m talking about real estate investment trusts (REITs).

And now, there are three REITs that combined provide over 9% in income with over 200% average dividend coverage. That means they could double their payouts and still generate enough cash to cover them.

Plus, these stocks are out of favor, making them relatively cheap compared to their peers and the overheated broader market.

So what are they?

Before we get to that, let’s whittle down our selection to a group of REITs paying yields between 8% and 10%. We’ll then zero in on a group of fairly well performing trusts that just don’t get as much attention as the rest of the sector.

That leaves us with 9 options:

Follow me as I go through these and identify the most undervalued by a quick glance at their fundamentals.

To start, let’s look at how these REITs have been doing to see if any upside is already priced in. Looking over the past year, the results are surprising: 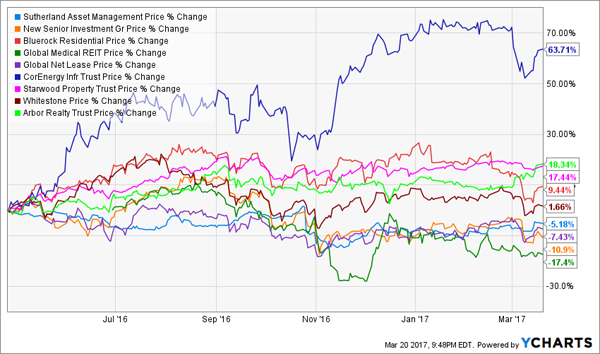 Looking at the last year’s performance, it’s clear that CORR has gotten a lot of market love, leading us to question whether it’s intrinsically overvalued. Similarly, we might also start to wonder if ABR, SNR, GNL and SLD are great bargains or weak businesses, as they’ve fallen sharply over the last year, despite overall strength in the REIT sector.

Now let’s turn to a more fundamental metric: how much we’re paying for funds from operations (FFO).

Since FFO is the metric commonly used to analyze how much cash a REIT is generating and, therefore, how much potential it has to raise dividends, we’d expect a correlation between recent stock performance and the ratio of price to FFO.

That’s no different from regular stocks, where we’d expect a higher P/E ratio after a big run-up. But the reality is a bit more complicated. 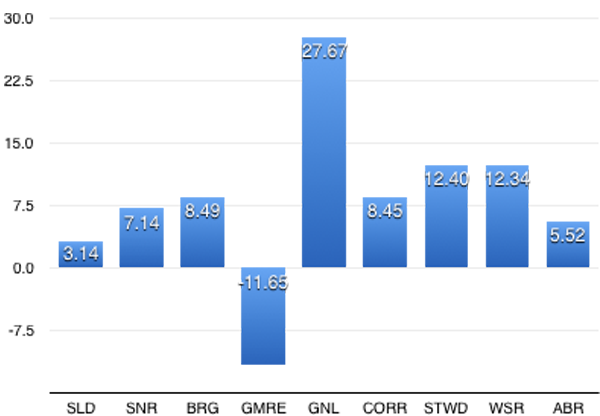 The REIT sector is fraught with inefficiencies, so it’s not shocking to see such massive discrepancies between price and recent performance. The recent top performer (CORR) is actually one of the lower valued, while middling GNL is the highest valued.

Also, we see that GMRE has a negative ratio because the company has negative FFO. So we can immediately strike that one off the list of possible buys, despite its recent price declines.

We can also remove CORR from our buy list, despite its lower valuation, for one simple reason: with the recent price run-up, there is a strong chance that further profit taking will hit the stock in the near term.

Additionally, when it comes to infrastructure, we might want to avoid the uncertainty regarding Trump’s promised but as-of-yet undelivered spending in this area. While this may still come, it may not benefit CORR, and we see the stock is still up sharply following Trump’s win, indicating that this risk hasn’t been priced in.

Instead, let’s focus on the lower-valued names with the lowest recent performance. That leaves us with four: SLD, SNR, WSR and ABR. If we bought a REIT portfolio of just these four stocks, what would it look like?

Take a look for yourself:

First, the average yield is 9.4%—a stellar number in a world where Treasuries are paying less than 3% to lock up your cash for 10 years. But also notice the dividend coverage column. Three of these stocks are earning far more in FFO than they’re paying out in dividends to shareholders.

Then there’s Arbor Realty Trust. While the company has cut its dividend over 51% since its 2005 IPO, that was during the financial crisis, so we could forgive Arbor for that—especially since the payout has jumped 127% in the last five years and the company is now earning double its payouts in FFO. So that dividend is nowhere near getting cut anytime soon.

That leaves us with WSR, which is the only REIT on our shortlist that hasn’t increased dividends since its IPO and is under-earning its payouts. That’s partly a result of its small size and aggressive expansion; WSR is investing heavily in growth, but until the company is solidly out-earning its dividend, I see no reason to diversify away from the safer and higher yields of SLD and SNR, as well as the extremely safe comparable yield of ABR.

Just by reading this article, you’re ahead of 90% of investors, who are happy to buy overpriced Dividend Aristocrats, sit back and hope for gains.

That may sound safe, but in this scorching market, these folks are running the highest risk of big losses we’ve seen in years.

And they’re doing it for a truly pathetic payout! Here’s what the yield on the SPDR S&P 500 ETF (SPY) looks like after the market’s mammoth post-election run: 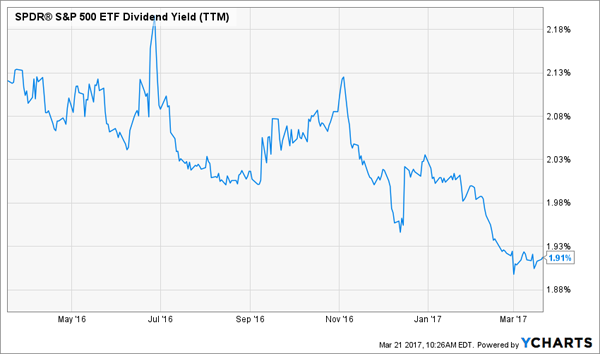 Clearly, if you need income today, your average blue chip is no help—and most are overvalued traps waiting to plunge—and take your nest egg with them!

That’s why I’m digging into hidden corners of the market, like REITs. But they’re just the start. There are other investments with even higher—and safer—payouts, such as closed-end funds and preferred shares.

Here’s the upshot: after months of sifting and analyzing, we’ve zeroed in on the 6 best picks from these snubbed sectors and combined them into a 6-stock portfolio that hands you safe, stable payouts of up to 10.1%!

We call it the “No-Withdrawal” retirement portfolio for a simple reason: due to its outsized yield, it hands you a safe—and growing—income stream that will let most people retire on just $500,000!

And you can generate that reliable cash flow without having to sell a single stock.

Best of all, because these 6 investments are absurdly cheap, they’ll soar double digits if the market grinds higher, and they give you critical downside protection, too.

But no matter what happens, we’ll still collect those fat dividends!

I’m ready to share this one-of-a-kind portfolio with you now. Simply click here to discover these 6 investments’ names, tickers and our complete strategy for yourself.