Buy This 8.5% Yielder Now and Hold It Forever

If you want to diversify, get high-quality dividend growth and avoid risky speculation, the SPDR S&P Dividend ETF (SDY) may seem like a no-brainer.

But buying this fund would be a big mistake.

Today I’m going to show you why … and help you avoid a couple other seemingly obvious moves that could steer you into big trouble in 2017. Further on, I’ll reveal a terrific fund to buy now and tuck away for two decades or more.

First, back to SDY, which has handily beaten the S&P 500 over the past decade: 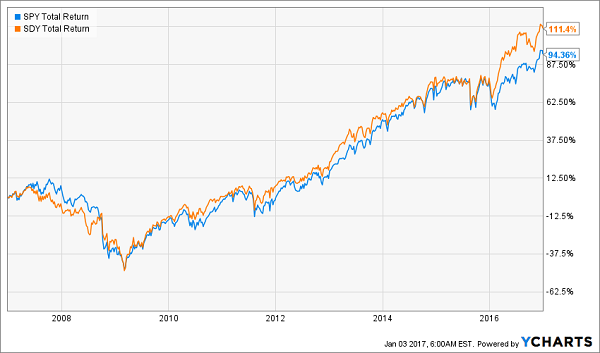 At the same time, more dividends have been paid out, and SDY’s payout is now larger than the broader market’s: 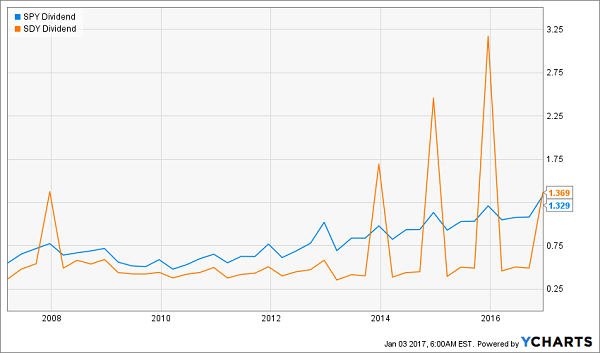 So why not just buy this fund and call it a day?

I’ll give you three reasons.

First, the dividend is too low. We can easily beat SDY’s 3.3% yield by being a little more selective.

Second, SDY overexposes us to many underperforming and volatile companies.

And finally, the fund includes some stocks with strained payout ratios (or the percentage of earnings paid out as dividends).

For many people, it’s difficult to believe that a firm that has paid growing dividends for more than two decades could suddenly cut its payout, but it happened to Bank of America (BAC) and General Electric (GE). Before 2008, you’d have been laughed out of the room for suggesting instability in a stock like GE.

And if it happened to GE, it can happen to any company, especially now that many of the so-called Dividend Aristocrats—or S&P 500 companies that have increased their payouts for 25 straight years or more—in the energy sector are facing negative earnings.

Instead of blindly buying all of the Aristocrats, we could limit ourselves to just the top five highest-yielding stocks. This gives us a higher yield (4.5%) than you’d get from SDY, as well as some diversity across industries. Those companies are HCP, Inc. (HCP), AT&T (T), AbbVie (ABBV), Chevron (CVX) and Consolidated Edison (ED). 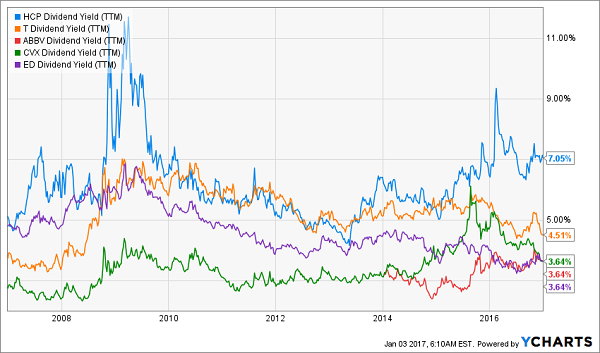 There’s just one problem—these stocks haven’t been doing so well. Over the last four years, only one of them, AbbVie, has outperformed the S&P 500—and a couple have been awful duds: 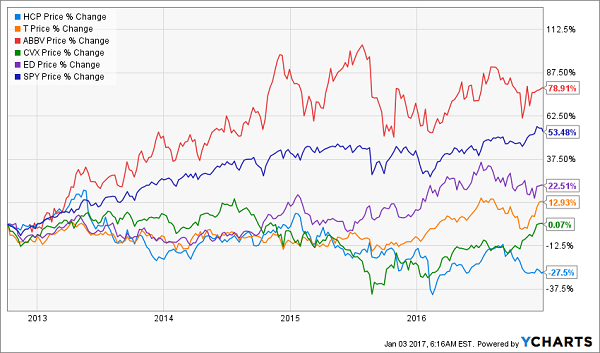 So choosing the highest-yielding Dividend Aristocrats clearly doesn’t work. What can we do instead?

How about picking the Eaton Vance Tax Advantaged Dividend Fund (EVT)? This closed-end fund (CEF) has outperformed the S&P 500 on a total-return basis over the last five years: 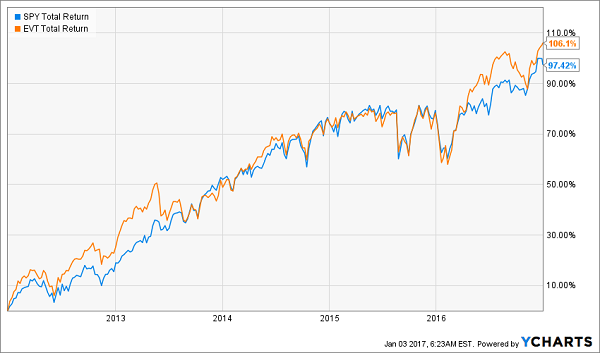 Its portfolio includes high-quality dividend payers (although, admittedly, not all are Dividend Aristocrats). They include names like JPMorgan Chase & Co. (JPM), Pfizer (PFE), Verizon Communications (VZ) and insurer Chubb Ltd. (CB). The fund’s dividend yield is a staggering 8.5%, and its dividend has gone up 36% in the last five years.

I don’t care that the holdings aren’t all Aristocrats—the fund has a team of managers who have proven their value by conservatively employing leverage and constantly rotating the portfolio based on the payout quality of the companies EVT holds.  The low management fee—just 1.08%—is a bargain when you look at its outperformance and consider the fund’s tax-advantaged structure, which should lower the tax burden on your profits.

EVT is just one way to bust out of the trap too many people fall into: leaning on Dividend Aristocrats for income. That’s an especially poor strategy now, with many of these stocks looking far from aristocratic.

As I just showed you, many Aristocrats are shadows of their former selves, limping along with pathetic $0.01-a-year dividend increases and little—if any—growth left in the tank. Yet plenty of them are priced to perfection anyway!

Worse, even if you simply bought the five highest-yielding Aristocrats I mentioned a few paragraphs ago, you’d need a million dollars just to generate $45,000 in yearly income.

I think you’ll agree that this is no way to build long-term wealth.

That’s why we’ve built a brand new income portfolio designed to beat the “aristocrat blues” and throw off a safe—and growing—8.0% income stream in the process!

Think about that for a moment: with this powerful collection of investments, you can grab that $45,000 income stream with less cash upfront—and I don’t mean a little less: I’m talking about a nest egg of just $560,000!

And unlike, say, piling all your money into a single investment like EVT, our new portfolio spreads your savings out over 6 proven money-makers from wildly different corners of the market. This unbeatable diversification keeps your nest egg safe while it generates a rising income stream for you.

We took the wraps off this powerful new 8.0% retirement portfolio just weeks ago, and I can’t wait to show it to you. Simply go right here to get all the details—including the names of the 6 unsung income wonders it’s built on—now.