Today we’re going to make a couple crafty moves worthy of the canniest contrarian—and in doing so, we’ll grab reliable income plays other investors are snubbing (with outsized yields up to 8.6%).

These moves fly right in the face of the Federal Reserve’s planned rate hikes, potentially starting as early as March, but that’s the whole point: plenty of folks have let the fear of higher rates scare them off these investments. But as mainstream investors almost always do, they’ve taken things too far, nicely setting us up to grab these high yields and some price upside as 2022 unfolds.

Let’s start with our first move, which is into longer-duration bonds, and specifically closed-end funds (CEFs) that hold them.

The Truth About Bonds and Interest Rates

Stick with me for a moment, because I know at times like these, when interest rates are poised to rise, longer-duration bonds can come under pressure. The reason for this is simple: imagine today I lend someone $100 for 4% interest, then tomorrow I lend $100 to someone else for 5% interest. Now imagine I offer to sell you either of these loans. Which are you going to value more? Obviously the one with the higher interest rate. 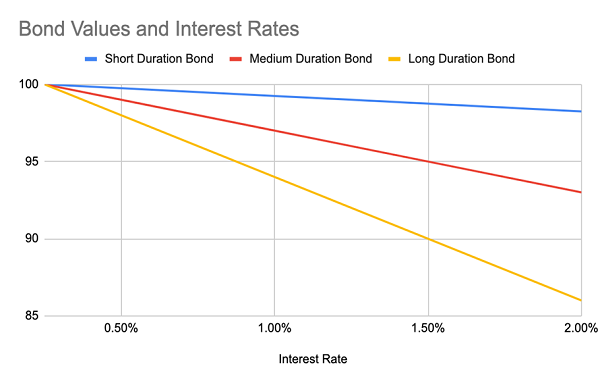 As a result, as interest rates go up, the value of current bonds goes down. Moreover, bonds that have a longer duration (i.e., the borrower has longer to pay back the loan) go down in value faster as rates rise, because the lender’s money is tied up in the loan for longer as rates go up.

But this time, long-duration bonds are way oversold, as the chart below shows: 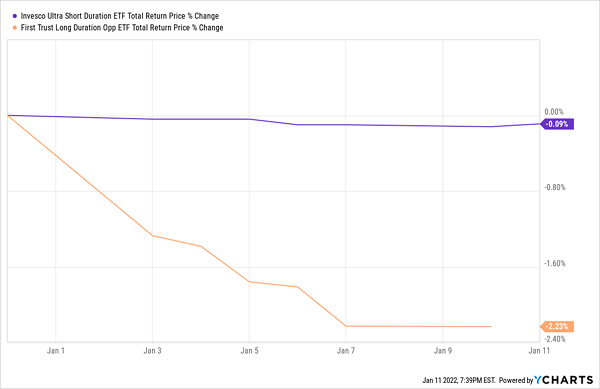 If we compare the Invesco Ultra Short-Duration ETF (GSY), in purple above, with the First Trust Long Duration Opportunities ETF (LGOV), we see that, as you’d expect, the market is selling off long-duration bonds in exchange for short-duration ones because, as discussed a second ago, long duration bonds are likelier to lose value as interest rates drop.

However, in doing so, the market has already priced in the interest-rate risk that long-duration bonds are facing, which means some bonds have gotten oversold as they offer good rates of return and relatively low risk.

In such a situation, your best bet is to buy a well-managed corporate-bond CEF like the Western Asset High Income Fund II (HIX), an 8.6%-yielder that’s well diversified across the bond space, with 270 holdings and an average duration of 6.25 years, which is a bit long, but remember, we’re buying it because it’s buying those longer duration bonds when they’re oversold. It holds 94% of its portfolio in corporate bonds, and these issues provide a healthy average coupon rate of 7.9%.

The fund also trades at a slight discount to NAV (or just below the value of the bonds in its portfolio) as I write this.

The real reason why we want a CEF like HIX, though, as opposed to a passive ETF like LGOV or the high-yield benchmark SPDR Bloomberg Barclays High Yield Bond ETF (JNK), boils down to one thing: active management.

HIX Soars Past Its Benchmark 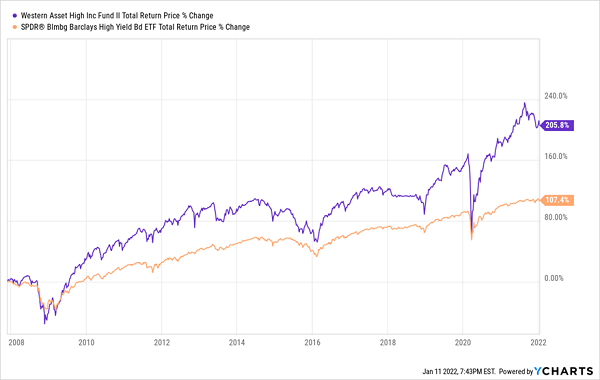 This is just the kind of eye for value we want in a market like the one we’re facing now. And best of all, HIX’s 8.6% dividend, which has held steady through the pandemic, gives us a steady income stream that runs well ahead of inflation.

Now let’s move on to the second part of our contrarian high-yield plan, which involves stocks.

When rates rise, stocks can suffer, mainly due to rising borrowing costs: as companies need to pay more to borrow money, their profit margins will shrink and their stocks will thus become less valuable. This is why stocks took a nosedive in 2015, when the Federal Reserve made it clear it was going to start raising interest rates (which it did in December of that year).

Stocks Get a Shock … 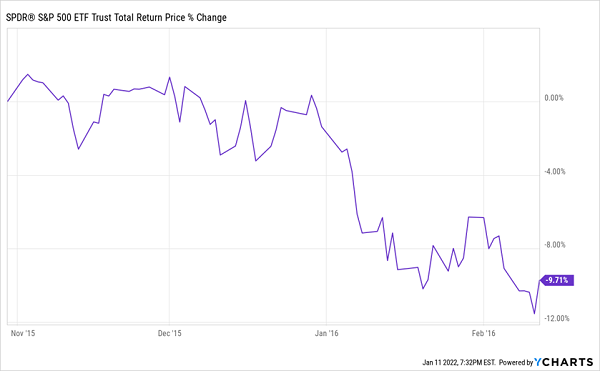 That is the theory, at least. Reality, of course, is a lot messier. In reality, the Federal Reserve is likely to increase interest rates up from effectively zero to about 1% in 2022, which is still a pretty small amount to spend when borrowing money and is not unlike the jump in interest rates that took place in 2016 when, despite all expectations, stocks soared. 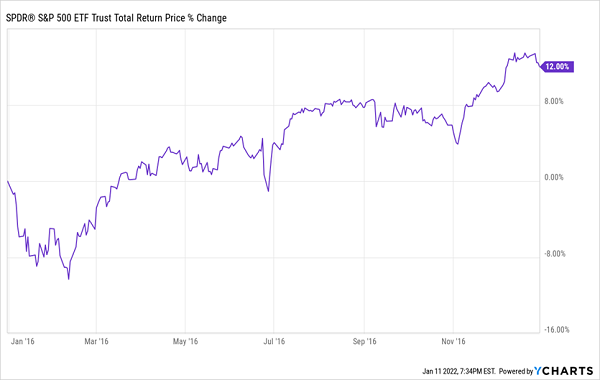 The simplest reason for this is that, when the market realized that the relatively small increase in interest rates didn’t affect corporate profits (in fact, the S&P 500’s earnings per share jumped 29% in 2016!), traders realized they’d made a mistake selling stocks and bought back in.

Looking at the start of 2022, it seems clear that history is repeating itself in the stock market. As is the case with longer-duration bonds, that makes now a good time to buy a fund like the 7.3%-yielding Liberty All-Star Growth Fund (ASG), whose holdings such as Amazon.com (AMZN) and Microsoft (MSFT), both of which have been oversold in this interest-rate selloff frenzy. And both of which have more than enough financial strength to deal with a rise in borrowing costs.

The fund does trade at a 5% premium to NAV today, but that’s par for the course for ASG. And it’s traded at premiums much higher (up to 15%) in the last year, so there’s plenty more room for its premium and by extension its price—to grow from here.

The beauty of the CEF market is that it’s small (with just 500 or so funds in existence). That means it’s mostly individual investors, rather than big institutional players, who buy these funds. And THAT means there are mispriced deals available to us on the regular!

The 4 CEFs I want to share with you right here are prime examples. They yield an outsized 7.5%, on average, today, and they all trade at ridiculous discounts as the headline-driven crowd has overlooked them. That won’t last, though, which is why I’m pounding the table on 20%+ price gains from these smartly run income plays this year.

Full details on all 4 of these must-own CEFs are waiting for you. Click here for full details, including names, tickers, current yields, best buy prices and more.