Dreading Tax Day? This 4.7%-Yielding Fund Is for You

Americans are blessed with a source of high passive income that is entirely tax free. Thanks to long-standing legislation designed to encourage more investment in our communities, municipal bonds give tax-free income to most people, and since you can get these “munis” in a fund that pays out 4.7% dividends, getting a really high income stream without the tax burdens has gotten really easy.

But not everyone is celebrating.

A lot of fears about muni bonds have blanketed the financial press over the last few years, in no small part because muni bonds, with their low volatility and steady income streams, tend to appeal to investors who want to avoid risky assets the most. What better way to get the attention of this group than to scare them? But the fears they stoke aren’t just irrational, they’re absurd. So today I want to tell you why you should ignore the fear mongers and how you can choose a fund that gets you 4.7% dividends the tax man won’t touch.

The biggest myth is the most eye-catching: municipalities are going bankrupt, and if you buy a muni bond, you’ll lose all of your money.

Even if this were true (it isn’t, as I’ll explain in a second), you can minimize this risk by investing in a muni bond closed-end fund (CEF) that invests in hundreds of muni bonds, so if one defaults, you’ve still got many others to rely on.

But that is almost guaranteed not to happen.

The default rate for municipal bonds from 2007 to 2016 was a mere 0.18%, according to credit-rating agency Moody’s. In other words, it’s 10 times more likely that you’ll get into a car crash than your muni bond will default.

And local governments aren’t running out of money. Thanks in no small part to a growing economy, state tax revenues grew 5.8% in 2019 and 7.4% in 2018. In fact, municipal tax revenues have been growing for years—and since that’s how municipalities pay for their bonds, munis are getting stronger than ever.

That revenue growth isn’t a short-lived phenomenon, either. While doomsayers call it a blip and point to an aging population, meaning more people will retire and less tax revenue will be collected, the facts indicate the exact opposite is going on. 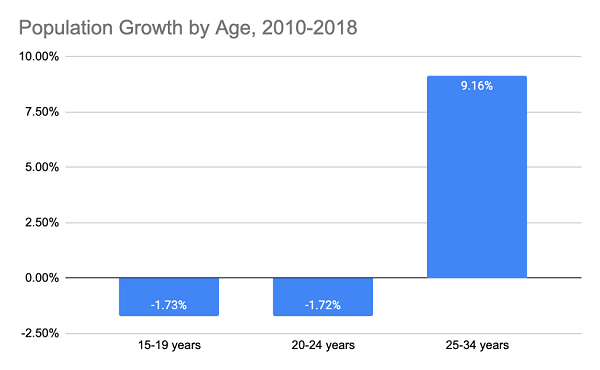 While the baby-boomer generation has been in the process of retiring for about 15 years now, this doesn’t mean we aren’t seeing a replacement generation coming in to pick up the slack. In fact, we’re seeing more Americans aging into the 25-to-34-year-old demographic than into the teen and early ’20s demographics, where people earn much less (if anything at all).

Americans are entering their prime earning years at one of the highest rates in decades—and that means income and sales tax revenues are growing more secure. Also, keep in mind that older Americans are choosing to retire later than they used to, so an aging America doesn’t necessarily mean a tax-revenue crisis. 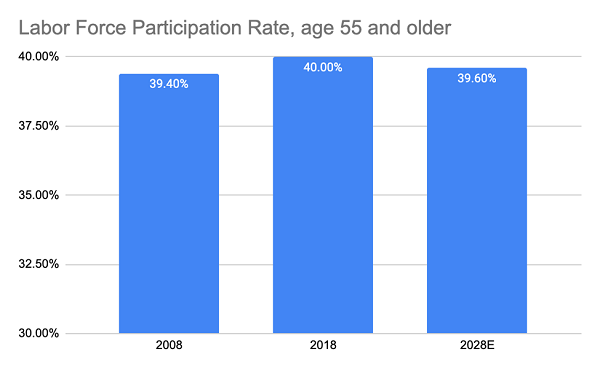 The facts tell us that there’s no demographic crisis at all. In fact, demographics are getting better than they were in the late 1990s and early 2000s. And this means municipal revenues are not at risk; the opposite is the case.

Overwrought fears aside, the market has been realizing this fact for some time. As a result, munis did this in 2019:

A Strong Showing for Munis 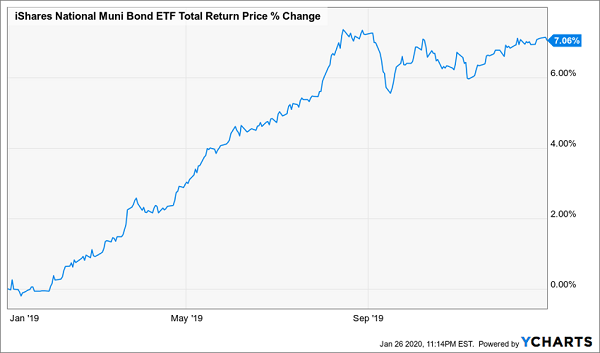 A 7.1% growth rate in a year is pretty big for munis, which have averaged 4% over the last decade. This is because munis are less volatile than stocks—they almost never go down in a year and, when they do, it’s usually by a percent or two. That lower risk of a downturn also generally means a smaller return.

So what accounts for 2019’s strong showing? In no small part, it’s the realization that several years of underperformance in munis, which were up just 2.1% annualized in the four years before 2019, were undeserved. Thanks to 2019, the asset class’s annualized return over the last 10 years is 3.9%, almost identical to its longer-term returns.

But if you still think munis are overpriced, there is a way to get them at a discount. There are 121 muni-bond CEFs currently trading for less than their market price, with an average yield of 3.9%.

And you can get an even higher yield in a low-risk portfolio with a fund like the Invesco Trust for Investment Grade Municipals (VGM), which trades at a 6.6% discount to net asset value (NAV), while paying a 4.7% dividend. And VGM has been crushing the index for years.

Beating the Index With a High-Yielding CEF 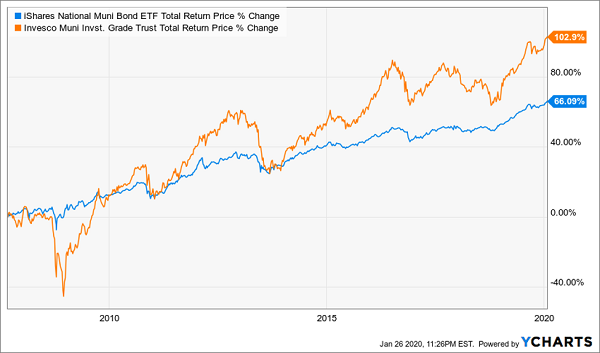 Even with its tax advantages, VGM’s payout pales in comparison to the cash streams thrown off by the 4 funds I’m going to show you now: they yield a retirement-changing 8.4%, on average!

And that’s just the start: I’m calling for 20%+ price upside from these 4 game-changing CEFs in the next 12 months.

These 4 funds go well beyond muni bonds to give you exposure to US stocks, real estate investment trusts (REITs) and high-yield corporate bonds. This diversification, combined with these funds’ huge discounts, gives you that 20%+ price upside I just mentioned.

Plus, these funds’ bargain valuations mean you’re not sacrificing the downside protection you’ll need in a market storm, whether it’s triggered by the trade war, the coronavirus or whatever else.

The time to buy is now. The full story on all 4 of these funds is waiting for you right here: names, tickers, buy-under prices and everything else you need to know before you buy. Don’t miss your chance to make a move, while you can still get these cash machines at a bargain.