The world needs to produce more food to feed everyone in the years ahead. Period.

Food shortages are likely to be an unfortunate megatrend of the 2020s. Rising  food demand is intersecting with another megatrend: shaky global supply chains.

Consider this bleak outlook from the U.N. World Food Programme’s 2022 outlook (emphasis mine):

“Globally, levels of hunger remain alarmingly high. In 2021, they surpassed all previous records as reported by the Global Report on Food Crises (GRFC), with close to 193 million people acutely food insecure and in need of urgent assistance across 53 countries/territories, according to the findings of the GRFC 2022. This represents an increase of nearly 40 million people compared to the previous high reached in 2020 (reported in the GRFC 2021). …
“In 2021, almost 40 million people were facing Emergency or worse conditions, across 36 countries. Of critical concern were over half a million of people (570,000) facing Catastrophe—starvation and death.”

Global supply chain issues have only exacerbated the issue. In June, Raka Banerjee, a Project Coordinator in the Development Data Group at the World Bank, highlighted the impact of one major disruptor: Russia’s attack on Ukraine:

“So together, Ukraine and Russia produce 15% of the world’s wheat but 30% of world wheat exports and 60% of the world’s sunflower oil. And after Canada, Russia and Belarus are the No. 2 and No. 3 producers of potash, which is a critical ingredient for fertilizer. And fertilizer prices are now almost three times higher than they were a year ago, which is almost definitely going to affect food production across crops and regions in the coming months.”

“We have a crisis today because we are not exporting grains out of Russia and Ukraine. And we have a brewing food crisis because we don’t have fertilizers to fertilize lands all over the world so that we can produce for the next harvest and the one after.”

The former has already resulted in rocketing food prices, which are virtually always in an uptrend but spiking violently of late. 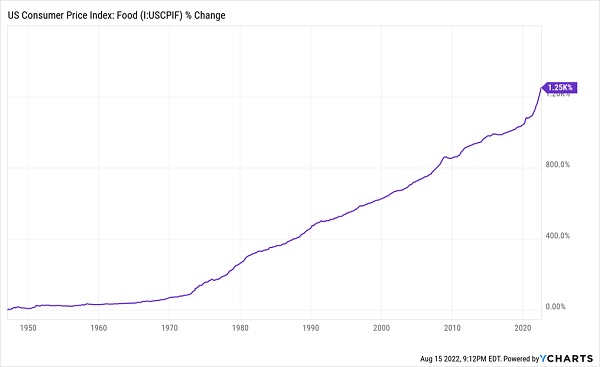 The backdrop to this is a pressing need for the world to crank out more and more food to meet the needs of a bourgeoning global population.

The Food and Agriculture Organization of the United Nations expects that the world will need to improve its overall food production by 70% between 2005-07 and 2050 to feed an estimated population of 9.1 billion people, with production in developing countries needing to “almost double.”

Some foods would need an even bigger push. Meat production, for instance, would have to grow by “over 200 million tonnes to a total of 470 million tonnes in 2050,” says the FAO.

It’s a logistical nightmare, made even worse by a growing trend toward counter-globalization, as two years of COVID- and Ukraine-related shortages have opened nations’ eyes to just how fragile global supply chains could be.

But it’s also one that clearly bodes bullishly for companies tasked with producing food at an ever-growing clip. That has put numerous ag and food stocks on my radar, not just for their growth potential—but the potential for this megatrend to fertilize a number of budding dividends.

You can read my longer case for Archer Daniels Midland (ADM, 1.9% yield) here, but in short, ADM is at the very heart of the world’s food supply. Its 400 crop-procurement facilities and 270 processing plants help ADM turn raw crops into supplements and ingredients, from cocoa powders and chocolates to soy proteins that make cold cuts and hot dogs possible, and to corn sweeteners, dextrose and citric acids that help flavor your favorite beverages.

Accelerating dividend growth, low volatility and management that actually knows when to buy back its stock are among several factors that make ADM stand out as an elite way to harness the food-supply megatrend.

But it’s not the only way.

Bunge (BG, 2.5% yield) is another attractive agribusiness—and Archer Daniels Midland would’ve told you the same back in 2018. At least for a little bit. Early that year, ADM reportedly expressed interest in a mega-merger, but talks fizzled out in a matter of months.

Regardless, this maker of specialty oils and milled grains is another important cog in the food-production machine. Strong food demand and tight commodity supplies have lifted Bunge’s profits, enabling it to green-light a meaningful jump in its payout: a 19% increase to 62.5 cents per share. That could help rekindle BG shares, which largely lagged while it kept its payout flat a couple years back.

Will We Get a Bunge-Cord Bounce? 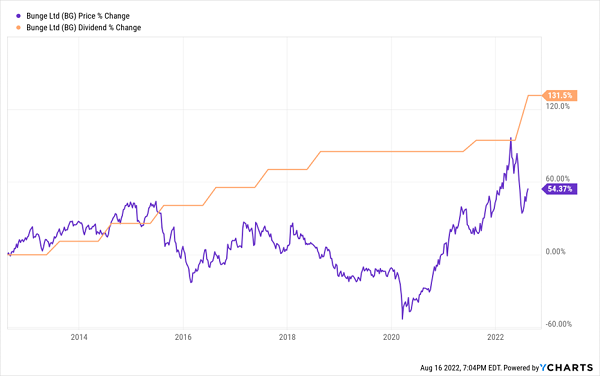 Also worth watching is Ingredion (INGR, 2.8% yield), which helps produce your favorite food tastes and textures. For instance, its Precisa and Penpure starches allow bakers to make chips light and crispy or hard and crunchy. Meanwhile, its stevia ingredients help enhance sweetness quality and minimize bitterness while reducing sugar content in beverages, ice creams and sauces.

A rebound in demand exceeding pre-pandemic levels has the company guiding for double-digit sales and operating profit growth. That should give INGR a bit more flexibility to do something for dividend growth, which (along with shares) has stalled out since 2018.

Dividends: Just the Right Ingredient for an Ingredion Resurgence? 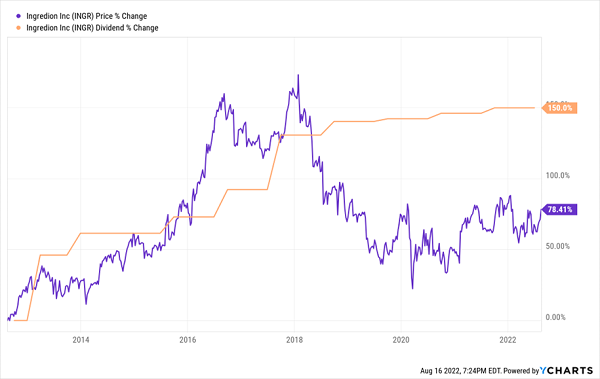 Fertilizer and chemicals firms will surely be critical to food-production efforts as well, and could enjoy a continued short-term bump as supply-chain woes are smoothed out.

Mosaic (MOS, 1.3% yield), for instance, is the largest U.S. producer of potash and phosphate fertilizer. Weak phosphate volumes this year have admittedly blunted a brisk potash market, sending shares on a roller-coaster 2022—MOS shares roughly doubled year-to-date by April but are now “only” up 38%. But be cautious: The dividend is still recovering from a brutal hacking that saw the payout drop 91%—from 27.5 cents quarterly to 15 cents, then just 2.5 cents—in 2017. (To its credit, Mosaic resumed dividend growth in 2019 and has since gotten more aggressive, bringing payouts back to 15 cents.)

CF Industries (CF, 1.6% yield), which produces agricultural fertilizers, is also on our radar after signs of life from its dividend. The payout, which had been parked at 30 cents quarterly since 2015, popped by a third in April, to 40 cents per share. 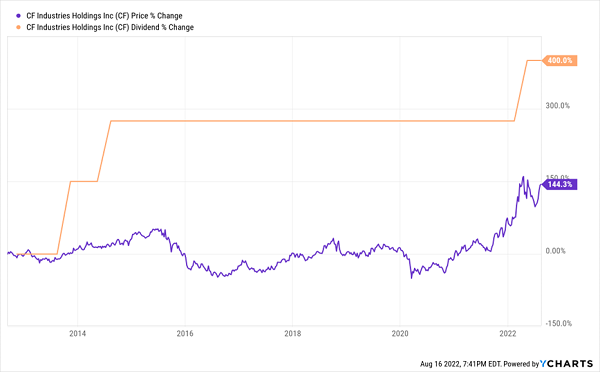 Corteva (CTVA, 1.0% yield) and Nutrien (NTR, 2.2% yield) should be on your radar, too, for signals of increased dividend aggression.

The former, an agricultural chemical and seed specialist, was previously the ag unit of DowDuPont, but was named Corteva in February 2018 and spun off in June 2019. It has little dividend history but started publicly traded life with a 13-cent payout, then raised it by a penny per share this year and last.

The generational catastrophe of supply chains disrupting the world’s already fragile food supply is triggering another trend—one of counter-globalization, where the world’s nations (including the U.S.) are exploring how to better produce domestically while creating new ties with more stable countries.

We’ve dubbed this and the other unprecedented shifts in the economy the “Great American Reset.” And we’ve compiled a list of 7 more stocks that, like ADM, BG and CF, are tied into these ground-shaking changes.

Most importantly: All 7 hand their profits to us in the form of accelerating dividends and buybacks that, together, drive their share prices higher.

Don’t miss your chance to protect and grow your wealth in today’s uncharted economy. Click here and I’ll tell you more about our plan to reap big dividends and upside as globalization dies out. I’ll also reveal how to get details (names, tickers and more) of all 7 of these “inflation-resistant,” “recession-resistant” stocks in an exclusive Special Report.