Real estate investment trusts (REITs) are as cheap as they’ve been since the financial crisis right now. The sector as a whole has been battered for more than half a year, driving yields on the Vanguard REIT ETF (VNQ) to their highest point since 2009: 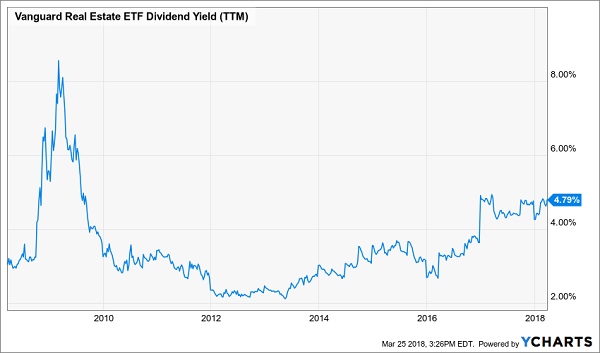 If you bought REITs then, you doubled your money in less than four years: 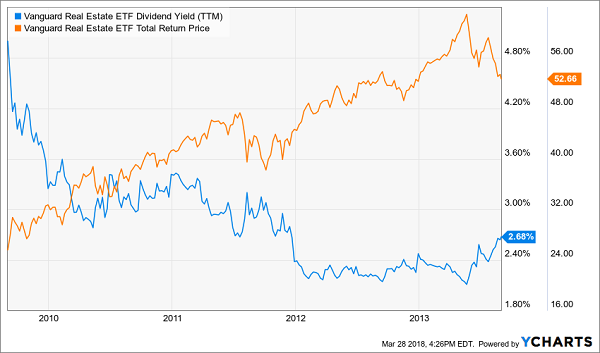 And while this may be a fine time to buy VNQ, there are even better deals to be had amongst the “niche” landlords – both in, and outside, of the benchmark REIT index.

Residential, commercial and industrial options abound with unique opportunities that often go under-covered by analysts (and thus can be undervalued). These firms play in small areas of the market where there are few well-heeled competitors to drive demand up and profits down.

The following four REITs, yielding between about 3% and 8%, aren’t everyday names. And that’s a great start.

American Campus Communities (ACC) serves a very particular area of the apartment market: students. ACC currently boasts 206 communities across 96 campuses, and as of the end of 2017 had an average occupancy during fall of 97.6%. The REIT’s off-campus housing developments span the country, from Arizona State University to Texas A&M to the University of Maryland.

Despite the steady flow of tenants, American Campus Communities has had a rough run lately. That’s in large part due to a glut of supply amid a slowdown in enrollment.

That said, the selling may be overdone.

ACC managed to clear admittedly lowered expectations for its fourth quarter, but also beat the analyst consensus with 2018 NOI forecasts for 2% growth. Moreover, the company expects core funds from operation (FFO) to improve by 3% this year versus a 2% improvement in 2017. It’ll be helped in large part by a slowdown in supply growth.

And more broadly speaking, American Campus Communities is helped out by its (and other education REITs’) role in public-private partnerships with educational institutions – a role that should remain strong as cash-strapped states continue to seek innovative options to update student housing.

The year’s worth of selling has dropped ACC down to less that 16 times FFO. And at $2.31 per share, that translates into a payout ratio of roughly 76% of its $1.76 annual dividend. Thus, the payout is safe, and the price is at least fair. As far as turnaround candidates go, American Campus Communities looks intriguing.

Ignore GDP numbers – thrift is still in. And that’s where plays such as Dollar General (DG), Walmart (WMT) and our next REIT, Sun Communities (SUI), come in.

Sun Communities is one of a few “manufactured home” REITs that provide affordable housing to the lower-middle and lower economic classes. SUI specifically offers three different community types: “mixed-age communities,” “Active 55+ communities” and RV parks, which boast features such as pools and fitness rooms. People can either buy or rent homes within some of these communities, or they can move their own homes onto Sun Communities properties.

Business is booming. The company posted a double-digit jump in FFO in 2017 to $4.17 per share, up from $3.79 in the year-ago period. Annual home sale volumes increased 3.5% year-over-year, and revenue-producing sites jumped from 1,686 to 2,406. Better still, SUI has flipped on the dividend-growth switch after years of stagnation, first with a 3% uptick in 2017’s payout, then a 6% hike in this year’s quarterly payouts. Better still, that payout will represent just 63% of Sun Communities’ FFO if it hits the midpoint of its 2018 guidance.

Unfortunately this good news is “priced in” as SUI shares still trade at more than 21 times FFO today. That’s better than the “25” multiple I recommended avoiding last time we talked SUI. But I still wouldn’t indulge just yet.

Sun Communities (SUI) Deserves a Premium, But How Much? 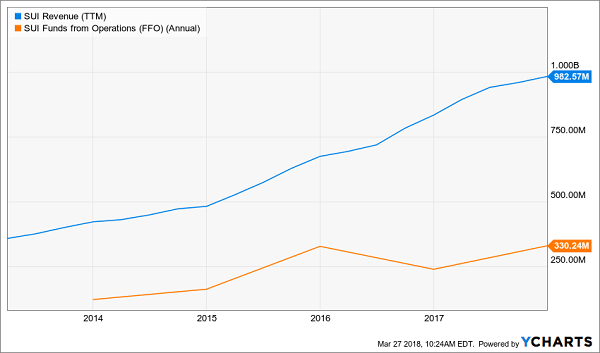 Office properties are a well-traveled area of the REIT world. From downtowns to suburbs to office parks, there are simply gobs of areas where these companies can ply their trade.

Hudson Pacific Properties – a West Coast-focused office REIT – isn’t much different, but it does have a small business subset that makes it a unique play you’re unlikely to find elsewhere on Wall Street.

That is, in addition to a high-growth office portfolio across major cities such as San Francisco, Los Angeles and Seattle that leases out to the likes of Alphabet (GOOGL), Netflix (NFLX), Uber and even the NFL, it also boasts another small segment that owns and operates Sunset Studios locations spanning 35 stages across three locations. Those boast clients such as MTV, Disney (DIS), Comedy Central and CBS (CBS).

This has been a dangerous combination of businesses that has led to years of mostly uninterrupted growth. Last year, FFO jumped 11% to $1.98 per share, and its in-service office portfolio lease rate grew from 91.2% a year ago to 92.1%.

And while HPP doesn’t offer the most robust current yield, the payout of 25 cents quarterly is double what it was just two years ago. That impressive dividend growth that will be difficult to continue at such a breakneck pace, but given Hudson is only paying out half its FFO in dividends, future hikes are a reasonable assumption. 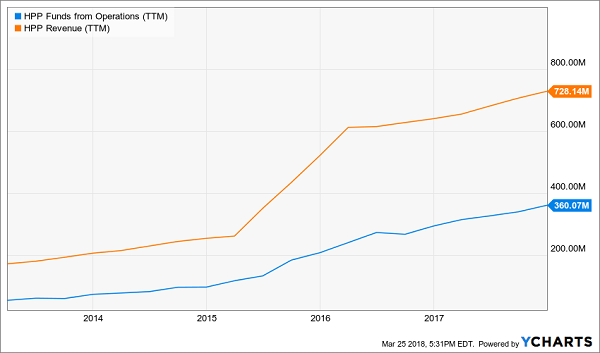 Income hunters looking for more substantial yield will like the headline number for CoreCivic (CXW) at present, which is approaching the 9% level.

President Donald Trump’s election was expected to deliver huge returns to private-prison companies. Trump’s predecessor had actually ordered the phasing-out of these prisons for federal use, but that was reversed soon after Jeff Sessions was installed as attorney general.

Still, things haven’t quite turned out the way CXW longs would want.

Funds from operations for 2017 came in at $2.38 per share, down from $2.70 per share in 2016. Worse, the company is guiding for even lower FFO in 2018 – a range of $2.23 to $2.31 per share. That’s thanks to a number of issues, including a massive hit from California, which is working on reducing inmate populations, as well as increased interest expenses.

This is a difficult situation to gauge because the broader Trump narrative seems to point to plenty of upside for CoreCivic. However, it’s clear the company has a multitude of very real, tangible problems it needs to navigate before investors should go diving in this battered name.

The last time we saw this “simple buy signal” of a REIT bull run was in September 2009. And as discussed, folks who simply bought a “dumb index” doubled their money in short order.

But you and I can do much better – by purchasing 7%+ payers with growth potential to boot.

If you’re looking for massive dividends of 7% or more to fund your retirement, with enough growth that you’ll actually be able to keep building your nest egg, these are the perfect plays for you.

Provided that you buy them now, of course. Before the “first-level types” come rushing in, bidding their yields below 7% (then below 6%, and so on).

My latest exclusive report, The Best Bargain REITs for 7%+ Yields in 2018, is a roadmap of the current REIT environment. I’ll not only show you which types of REITs to buy and which types you should avoid right now, but I’ll also show you an undeniable market indicator that consistently delivers secure payouts of 7%, 8% or better.

And I’ll also deliver you a pair of recession-proof REITs that not only yield more than 7.5% right now – but have about 25% in potential upside ahead, too!

If you want to retire comfortably, you can’t ignore the importance of having a one-two punch of income AND growth. Yes, large quarterly dividend checks will help you pay your regular bills, but what do you do when the unexpected happens? If your nest egg is stagnant, you’ll end up crippling your income potential anytime an emergency requires a big lump-sum payment.

But with picks like these bargain REITs, you can put that worry to bed. By grabbing yields of 7%+ you’ll be bringing in four times as much cash as the broader market delivers – and with my pair of picks, you won’t be sacrificing growth for all that income!

I want to send you a FREE copy of my latest special report, Recession-Proof REITs: 2 Plays With 7.5%+ Yields and 25% Upside, with all the details. It includes the names, tickers and exact buy advice on how to start profiting right now. It’s everything you need to know before you invest a single penny – and it’s yours at no cost whatsoever.