Tech stocks have finally taken a breather—and we’re going to pounce on this dip—and grab a rare “double discount” while we’re at it.

The strategy we’re going to use also lets us “squeeze” the biggest tech names for payouts that are unheard of in the sector—I’m talking yields up to 6.3%.

This approach is an ode to my mom who, to this day, refuses to pay the sticker price. If there’s a coupon to be found, she’ll find it and find another coupon to secure a double discount—even if it requires management approval to apply! 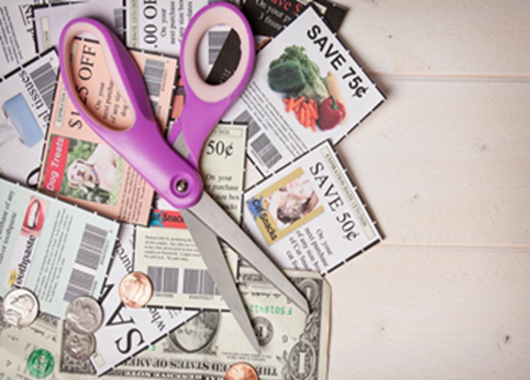 The dividend equivalent of the back-to-back coupon is buying discounted closed-end funds (CEFs) after a pullback, and that’s exactly the setup we’ve got in tech now.

To see what I’m getting at, consider Apple (AAPL). As I write this, the stock is off about 10% this year and 16% from the all-time high it hit on January 26: 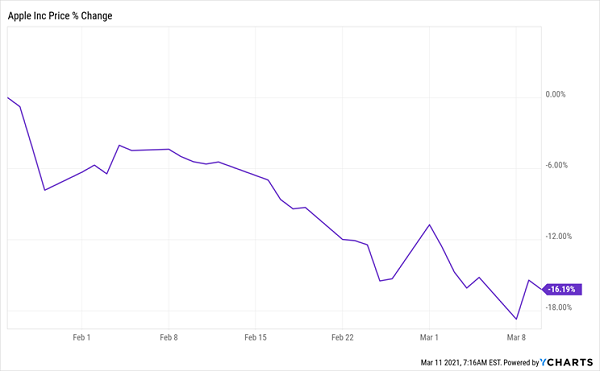 Here’s where our “extra” discount comes in, because when you buy Apple through a CEF that’s also trading at a discount, you get an even better deal (and that big dividend I mentioned a second ago, too).

Case in point: the Columbia Seligman Premium Technology Growth Fund (STK). Apple is the CEF’s No. 2 holding, at 5.5% of the portfolio. And, thanks to the selloff, STK has traded at discounts to net asset value (NAV) as wide as 4% in the last few days, and this discount is narrowing as I write this. That’s down from the premium at which the fund usually trades.

(In other words, the fund trades for less than the value of its portfolio, a quirk that exists only with CEFs. The bottom line is that a CEF’s share price can, and often does, trade below its portfolio’s value—setting up a disconnect we can pounce on.)

We can thank the panic over rising interest rates—and the consequent selloff in tech stocks—for this sale on STK, which really opened up in the past couple weeks: 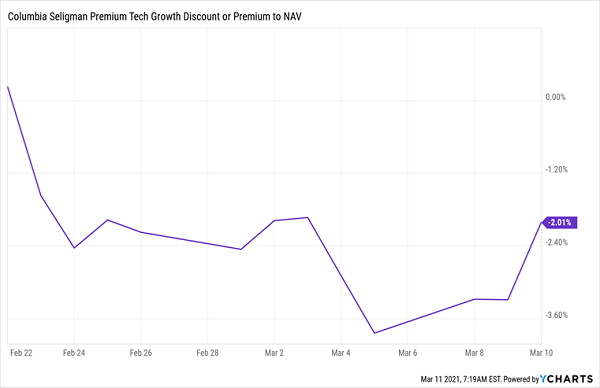 So what kind of upside can we expect as a result?

Besides the appreciation of its (oversold) portfolio of tech names—which includes not only Apple but heavyweights Microsoft (MSFT) and Alphabet (GOOGL)—we can look forward to an additional pop from STK’s closing “discount window.”

Consider that this fund has traded at a 1.23% premium, on average, in the past 12 months. Just a return to that level (a no-brainer, in my opinion), would give a few percentage points of “head start” upside from the closing discount alone.

But keep in mind that this 1.24% premium is just the average over the last year: STK’s share price has jumped as much as 12.6% above of its portfolio value. A return to a premium like that would drive discount-driven price gains of 15%! (To be honest, I think STK will land somewhere in the middle, between the average and all-time high premiums, as tech inevitably rebounds.)

The best thing (besides the discounts!) about buying CEFs is their outsized dividends. STK yields 6.3%, nine times more than Apple’s meager 0.68% payout and nearly seven times greater than Microsoft’s 1% dividend.

That makes our tech strategy simple: buy the dip now, double up our deal with a CEF trading at a discount, then collect our dividends as that “discount window” eases shut. When the discount flips to a premium, or when that premium goes above the long-term average, we sell and roll our gains into another discounted CEF.

Another Tech CEF to Watch Now—and (Maybe) Rotate Into Later

STK isn’t your only option in tech CEFs. Another one to pay close attention to is the BlackRock Science and Technology Trust (BST).

BST’s portfolio looks a lot like that of STK, with a lean toward Big Tech firms like Apple, Microsoft and Amazon.com (AMZN), but also a weighting toward payment processors—which are vital in our quasi-self-isolated economy—such as Visa (V), Mastercard (MA) and PayPal (PYPL).

The fund does yield less than STK, with a 4.2% payout, but it makes up for that by paying monthly instead of quarterly, and it’s steadily raised its dividend since inception in 2014, to the tune of 87% (with two special dividends thrown in for good measure): 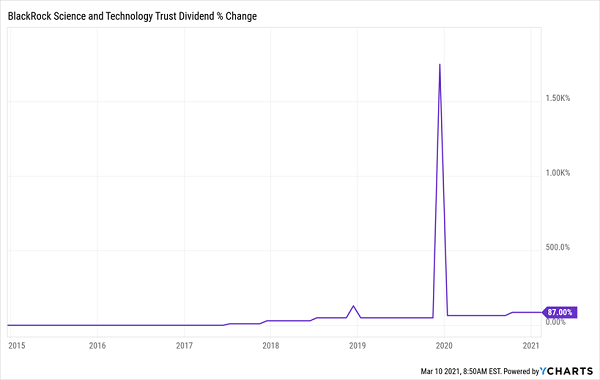 What’s more, BST has outperformed STK on a total-return basis (including dividends and share-price gains) since inception: 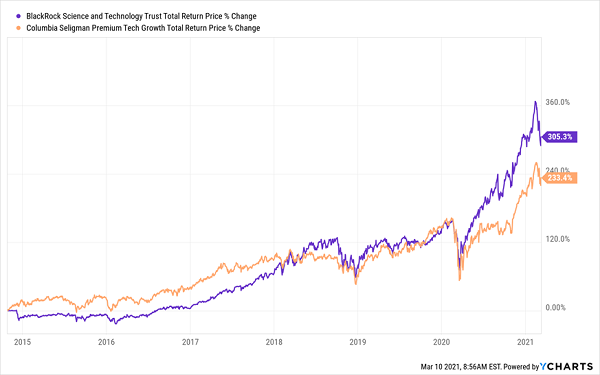 The only snag is that BST’s quality is no secret: as I write this, the fund trades at a 4.7% premium to NAV, which is well above the 0.8% average premium at which it’s traded over the past year.

That high premium will likely cap BST’s upside as tech bounces back, making STK the better choice now. BST is a good fund to keep an eye on, though, and potentially roll into once its premium falls back to a discount.

Profit From the “Great American Reset”

Even after a vaccine, our world has forever changed. Stocks like Peloton are booming as people work from home, and e-commerce plays like Shopify continue to build momentum.

The only problem: most of the stocks that profit directly from this monumental shift in American life pay low (or no) dividends.

But that’s not the case with the 7 “Great American Reset” stocks I want to share with you now. They all pay dividends that are exploding higher—and those surging payouts are pulling these 7 stocks’ prices higher, too!

These 7 perfectly positioned dividend growers include:

These 7 dividend growers are still cheap, but that won’t last. Don’t miss your chance to grab an early position. Go here and I’ll give you full details on these and 4 other “Great American Reset” stocks—must-know intel like names, tickers and forecast dividend growth—in an exclusive new investor report.