How to Play the Cryptocurrency Mania for Big Dividends

I know I don’t have to tell you that there are a ton of so-called experts out there dying to tell you why bitcoin, ripple or some other cryptocurrency is a surefire way to get rich.

Too bad they’re all wrong.

If you’ve been reading my columns on Contrarian Outlook, you know I issued a dire warning around Christmas that bitcoin’s promises were hollow, meaning the bubble was going to pop. “The truth is, bitcoin is actually the least private currency in existence!” I wrote, dismissing bitcoin’s biggest appeal for speculators.

But I had a bigger worry: would a burst bitcoin bubble wipe out tech stocks, too?

Up till early February, that looked to be the case. Look at bitcoin versus the AdvisorShares New Tech and Media ETF (FNG), which specializes in the biggest tech companies out there, like Facebook (FB), Alphabet (GOOG), Amazon (AMZN) and Netflix (NFLX): 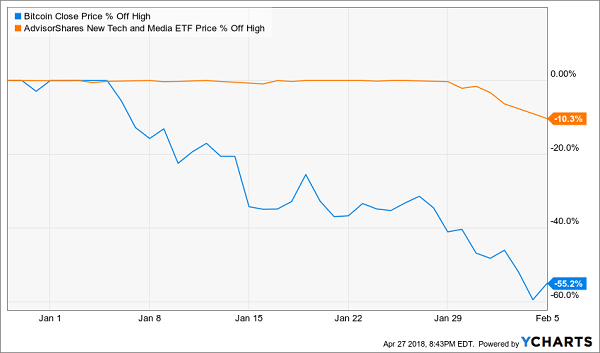 But that’s all history now.

In the middle of March, I told readers that the “tech bull keeps running,” thanks to growing earnings that were likely to continue.

So far, tech profits are up 31.8% from a year ago. Only two sectors have beaten tech: energy and materials, which is a result of rising commodity prices. No other sector—not even financials, which are getting a huge boost from the Fed’s interest rate hikes—comes close.

But there’s one crazy thing about this earnings surge—the stock market is very slow to price this good news back in.

Sure, much of that has to do with the Cambridge Analytica fiasco, but you can spot this trend across tech, despite its absurdly high profits. This means if you aren’t into tech, you still have time to get in.

But what’s the best way to grab some upside (and income) here?

Of course, Silicon Valley is crawling with venture capitalists looking for the next “big thing.” But figuring out what that will be is tough, if not impossible, for the average investor. So we’re not going to win this game by trying to pick and choose winning companies from the sidelines.

We need to diversify. And that means buying a tech fund.

There are a couple ways to do this. One is to get a “dumb” index fund, like the Powershares QQQ ETF (QQQ), which mimics the Nasdaq 100. Or you could get the Technology Select Sector SPDR ETF (XLK), which aims to hold all the tech stocks in the S&P 500.

There’s nothing wrong with this approach, but there is one big missing piece: income.

Both of these funds pay almost nothing in dividends (less than 1% between them), which means you’ll need to watch them like a hawk and rebalance when they get overvalued. And then there’s the real risk you’ll get it wrong.

Alternatively, you can have the pros do the hard work for you.

3 Great Ways to Play Tech—and Pocket Cash Dividends Up to 8.2%

There are a few closed-end funds (CEFs) that specialize in only tech stocks—while also paying a juicy dividend yield.

(If you’re unfamiliar with CEFs, click here for a quick, easy-to-read primer on these incredible income plays, which routinely throw off safe dividends of 8% and more.)

One great option is the BlackRock Science and Technology Fund (BST), which pays a 4.9% dividend, but its best quality is that its managers are strategic in buying and holding stocks when they’re ideally priced and selling them when they get pricey. The end result has been outperformance—BST is ahead of both QQQ and XLK since its inception in 2014: 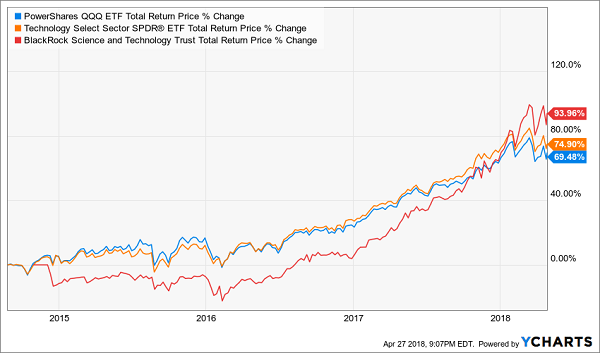 Another option is the 8.2%-yielding Columbia Seligman Premium Technology Growth Fund (STK). It’s popular not only because of its juicy income stream but also its history. STK has been around since 2009, so it has a longer track record than BST. There’s only one downside—it’s been lagging the indexes by a pretty big margin: 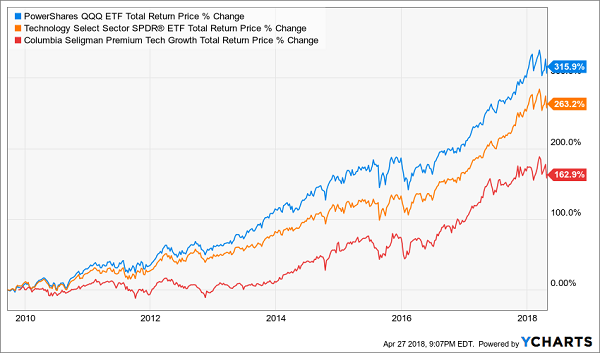 A big reason for STK’s lower return is the bigger dividend—in order to sustain that big income stream for investors, STK had to take more money out of the tech market to keep payments to shareholders. Inevitably, the profit-taking to sustain dividends resulted in lower profits over the long term, resulting in STK’s underperformance. If that doesn’t matter to you as much as the income stream, STK might be worth considering.

But I’d also suggest the Nuveen NASDAQ 100 Dynamic Overwrite Fund (QQQX), which mimics QQQ but with a 6.5% dividend. Unlike STK, QQQX has beaten the dumb funds for a long time, despite being a bit older (it came out in 2007): 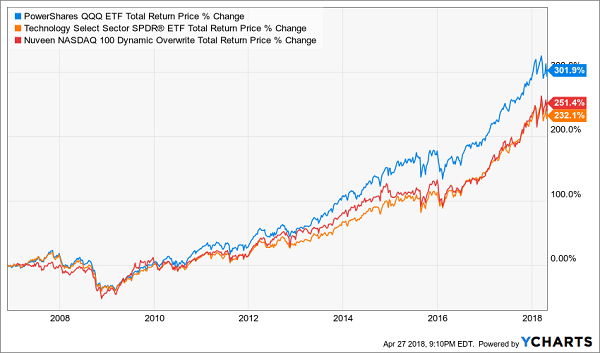 This big income stream and strong long-term returns have a price, however; QQQX is a bit expensive, trading at a 13.6% premium to NAV (net asset value, or the market value of its portfolio), so you’ll need to pay more than a dollar for a buck’s worth of assets. But if you want a steady income stream and don’t want to worry about timing your tech bets, QQQX might be right for you.

Here’s What Billionaires Are Buying Instead of Bitcoin

One group you won’t find speculating on cryptocurrencies?

The world’s billionaires: folks like Warren Buffett (who once called bitcoin a gamble, not an investment), Bill Gates and Jeff Bezos. And that should tell you all you need to know about betting your nest egg on the schizophrenic crypto market.

Funny thing is, there’s another place you will find the world’s billionaires quietly converging. That’s in closed-end funds—a market Gates has been investing in for years. And another famous investor dropped a cool billion into CEFs just months ago.

I’m talking about Boaz Weinstein, who made a killing betting against the ridiculous trades of JPMorgan’s so-called “London Whale.”

Here’s what he had to say about the big profits waiting to be made in CEFs—especially if you buy them at a serious discount to NAV:

You go into [CEFs] hoping the discount will narrow on its own, but one of the nicest points about this investment is that while you wait, you earn an above-average yield, given the discounted price.

He also called CEFs “a rare corner of the market where retail investors can get an edge over institutions.”

I couldn’t have said it better myself!

My 5 favorite CEFs to buy now all trade at ridiculous discounts to NAV and throw off a safe average dividend of 8.2%.

That’s the same payout as STK gives you, but instead of betting the your nest egg on one fund (especially in the wild tech sector), this carefully crafted 5-fund portfolio spreads your money out over 5 funds invested in almost every asset you can imagine: blue chip US stocks, international stocks, municipal bonds … even real estate!

Plus one of these 5 income wonders pays an almost unbelievable 10.0% in CASH!

And when I say the markdowns on these funds are ridiculous, I mean it. These 5 CEFs are “hardwired” to deliver a 28% average total return in the next 12 months as these massive discounts return to normal.

In fact, the gap has already started to close, so you need to make your move now! Click here and I’ll give you the names, ticker symbols, buy-under prices and my complete research on all 5 of these proven wealth generators so you can grab an early stake and kick-start your 8.2% income stream today.