How We Outsmarted AIG for 45% Gains Overnight

If you’re like me, few things get your blood pumping faster than when one of your stocks gets bought out—sending its price skyrocketing.

I’m writing you about this now because it’s fresh in my mind: subscribers to my Hidden Yields service recently bagged a 58% total return in less than two years on reinsurer Validus (VR) after it was snapped up by insurance giant American International Group (AIG) in a deal announced in January.

A big part of that gain came literally overnight—the stock popped 45% from its previous closing price when news of the deal broke.

I’ll share the name of an insurer that’s set to be the next Validus in a second. First, let me tell you a little more about our 1-click “buy the takeover” strategy—and how you can use it yourself.

How We Beat AIG to the Punch

A big part of our double-digit gain on VR hinged on its price-to-book-value ratio, which we watched closely, striking at two points when the stock had dropped to a level even with book value—or what Validus’s assets would be worth if it were to be broken up and sold off. 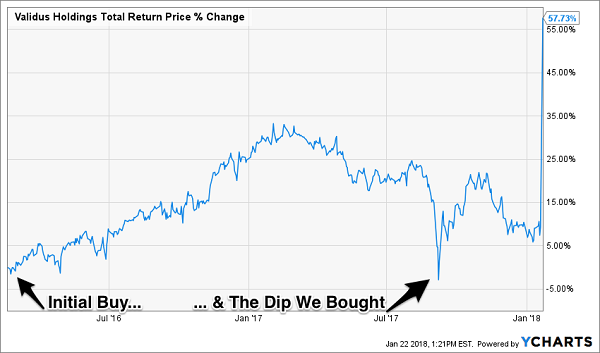 So because VR was trading at book value in February 2016, we were paying full value for its assets. But the key is that we got its actual business for free!

And what a business—VR sells insurance and reinsurance (or insurance bought by insurance companies to manage their own risk exposure).

Insurance, when done responsibly, is a huge moneymaker. Firms collect cash up front from their customers, in the form of premiums, and may not have to pay it out in claims for a long time, if ever. They then invest that money—called the “float”—and earn income on it.

Validus has been great at leveraging its float and handing the spoils back to shareholders: between its founding in 2005 and my 2016 buy call, VR had put $3.57 billion in investors’ pockets in the form of “regular” dividends, special dividends and share buybacks.

Put another way, Validus’s market cap at the time of its IPO was $1.84 billion, so folks who were in at the beginning had already received their investment back twice over, just in dividends and buybacks.

VR then went on to hand us a nice total return over the next 19 months—until Hurricanes Harvey, Irma and Maria sideswiped the stock, driving its price-to-book ratio back to 1x, giving us another chance to buy.

Here’s what people forget about disasters: while they do force insurers to pay out higher insurance claims in the short term, they let them charge more for insurance and reinsurance in those areas afterward, goosing cash flow in the long run.

The result was a 44% gain in just 4 months—from the time we bought the dip till the takeover was announced.

The takeaway: when bargain-hunting insurance stocks, keep a close eye on price-to-book. When it dips to 1x—or better yet below—it’s time to make your move.

Another Cheap Insurer to Buy Now

As I write, there’s another reinsurer that’s showing the same signs VR did.

You may be wondering how book value can go down while book value per share soars. It’s because management knows how to bargain-shop its own stock: it’s been buying back shares hand over fist in the last five years, slashing the total outstanding by 17.3%, thereby driving per-share book value upward.

Lincoln’s buybacks are currently on hold but will resume in Q3, now that it’s closed its $3.3-billion deal for the group-benefits business of Liberty Mutual, which will start chipping in to the bottom line in 2019.

Buying now also gets you in on one of the most explosive dividends in the space: even though the payout yields just 2.0%, it has exploded 3,200% since LNC resumed dividend hikes following the financial crisis, in late 2010.

Lincoln’s $14.7-billion market cap could make it a little tough for a buyer to acquire. But even if you don’t get the adrenaline hit our Validus owners did, you’re still getting a history of 3,200% payout growth, with more to come: just 33% of LNC’s free cash flow heads out the door as dividends.

Further upside—and payout growth—will come from rising interest rates (boosting the income LNC collects on its float) and profits from the Liberty Mutual buy. Snap up this world-class business now, while we can still get it for “free.”

These 7 “Free Lunch” Dividend Growers Are Set for a Takeover

I’ve just published the names of 7 more “free” businesses spinning off so much cash they’re set to TRIPLE your money in 3 years or less!

That’s a blaring red signal to any potential acquirer. And I’ll give you 3 more: each of these 7 companies boasts a bargain valuation, surging cash flow and a “Goldilocks” market cap—not too big and not too small to grab a corporate buyer’s attention.

The best news is each of these 7 buys are “locked in” to soar either way: they’re throwing off dividends far higher than those of the average S&P 500 name now, PLUS their payouts are doubling often, so we’ll collect a massive income stream on our original buy down the road, too!

Explosive dividends like these create a happy cycle, driving up a company’s share price as more investors take notice and pile in.

I’ve seen this strategy make investors rich time and time again. In fact, it’s produced amazing 23.5% annualized returns for my Hidden Yields subscribers since I launched the service in September 2015. In that span, we’ve crushed the broader market by 60%.

If you achieve annual returns of 23.5%, you’ll double your money in just a little over 3 years!

The time to make your move is now—before the 7 cheap dividend growers (and obvious takeover targets) I just mentioned take off. Click here and I’ll share their names, tickers and buy-under prices with you immediately.