Once upon a time, it was hard to find an income strategy much better than the idiot-proof “Dogs of the Dow.”

And hey, in this wild market in which the S&P can drop 2% in a couple of hours, this sounds pretty good. Let’s buy some blue chips and earn 3x more income than the broader market.

Which Dogs are paying the biggest dividends for 2022? As a group these battleship businesses are paying 3.8% versus just 1.2% for the broader market. We’ll review them in a moment. First, the Dogs of the Dow rules:

That’s it—do this, and you are your own Dogs ETF minus the fees. The Wall Street quants can keep their fancy spreadsheets. This formula uses the “old school” value approach of buying the biggest dividends.

Does the strategy still beat the market? It depends on the backdrop. The past three years delivered go-go returns, which resulted in the Dogs strategy lagging. 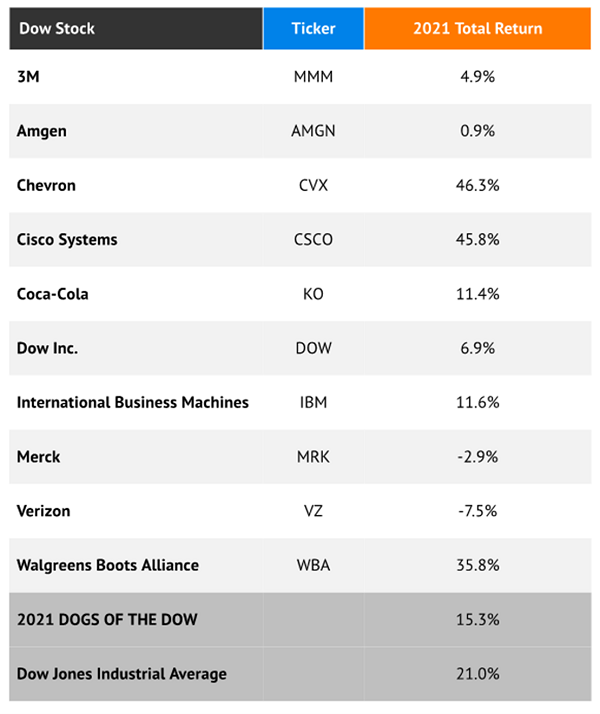 The 10 highest yielders underperformed the 10 middle yielders and 10 lowest yielders, not to mention the Dow as a whole. That means more overpriced stocks were carrying the industrial average while “value stocks” held it back. 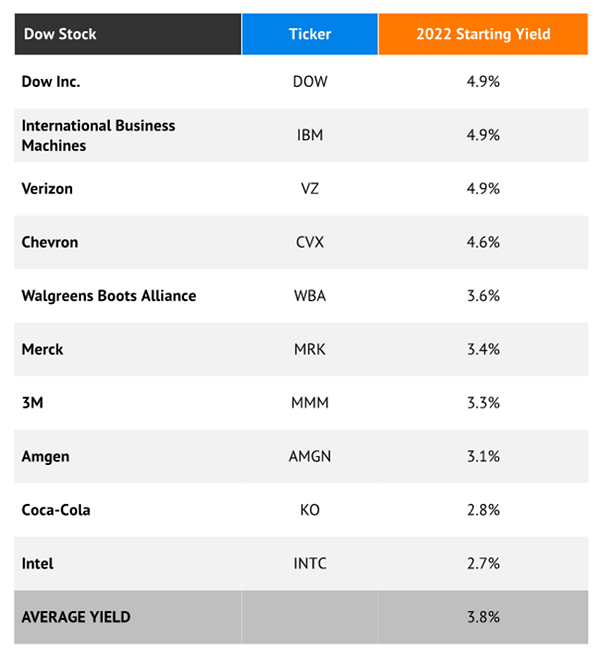 It’s a great yield compared to the market, and given the struggles that 2022 is likely to see with the Fed curtailing its money printing, we could probably do worse than buying Dog dividends.

Granted, most of us can’t retire off of 3.8% in annual yield. A “perfect” amount of portfolio income is closer to 7%. Even if we put a million bucks to work on the Dogs, we’d still only be netting $38,000 a year. We need upside potential in these stocks paying “just” 3.8%.

The Skinny: Intel struggled as rivals Advanced Micro Devices (AMD) and Nvidia (NVDA) made continued inroads against the once-dominant chipmaker. Fast-forward to 2021’s end, and INTC underperformed with a meager 6% total return. That was good enough to make it the only new Dow stock “elevated” into the ranks of the Dogs in 2022.

What Has to Go Right: Something that was already showing promise in 2021. Intel’s latest Alder Lake chips appear to be eating into the competition. A retail report from Germany’s Mindfactory showed that Intel’s CPU market share jumped to 30% in November from 23% in October. AMD still dominates, however, holding the remaining 70%. In short, Intel needs to play catch-up—and while it’s spending heavily on manufacturing capacity and R&D, it’ll take years to see gains on those investments.

The Skinny: Coca-Cola suffered through a second straight year of underperformance, delivering a little more than 11% in total returns last year. That’s despite an environment perfect for its recovery—one that saw more people go out and about than 2020. Remember: People might be able to drink Coke anywhere, but the majority (56%) of Coca-Cola’s top line comes from sales of beverages meant to be drunk away from home.

What Has to Go Right: Litigation. CFRA analysts note that an IRS tax case that represents a potential liability of $12 billion should be resolved in 2022. Said resolution “will lift a major overhang, allowing investors to focus on KO’s fundamentals and strong underlying momentum from the rebound in on-premise sales and robust pricing environment.” Of course, the ideal-case scenario isn’t just any end to the court case—but a ruling in favor of Coca-Cola.

The Skinny: Biotech mega-cap Amgen flat-lined in 2021, barely registering any returns at all—in fact, the only reason AMGN posted any positive returns at all was thanks to its dividend. Uninspiring results all year long hobbled shares. Its final report of 2021 included misses from drugs including Otezla, Neulasta and Aimovig.

What Has to Go Right: To be blunt, more people in doctor’s offices. COVID has been a decent revenue driver for any company fortunate enough to develop a vaccine or antiviral. But it also drove away patients seeking care for other issues, hurting many pharmaceutical and medical-device firms. A return to normalcy would do well for Amgen’s oncology and other drugs. And even then, Amgen’s products face numerous competitive threats—Dermavant Sciences’ tapinarof cream, for instance, could be approved by May of this year and eat into Amgen’s Otezla.

The Skinny: 3M was a prototypical “recovery” play that never really recovered, at least not from a share standpoint. The industrial sector returned more than 21% last year; MMM failed to deliver more than 5%, and the majority of that came from the dividend. 3M also signaled that it won’t stick the landing—it said 2021 Q4 organic revenues will come in at the low end of guidance (so, negative) and lowered the high end of its full-year profit estimates.

What Has to Go Right: There’s a lot to like about MMM from a fundamental perspective: a six-decade-plus dividend-growth streak, a fairly healthy balance sheet and all sorts of revenue diversification given its wide product lineup. But it’ll need to produce more consistent quarterly results to really entice buyers in droves.

The Skinny: Merck was one of the lousiest Dow components of them all, producing a negative return despite its 3%-plus yield. It seemed like the stock was about ready to exit its yearlong rut in late October after the pharmaceutical giant knocked Q3 earnings out of the park and raised its full-year profit forecast. But its sharp gains quickly evaporated, helping MRK return for another year as a Dow Dog.

What Has to Go Right: Better news on the drug-pipeline front. Merck is sorely behind the 8-ball here; UBS recently took shares down a notch citing recent negative updates from two products: HIV treatment islatravir and COVID drug molnupiravir. The company keeps plugging away at new indications for blockbuster Keytruda, with several trial-result announcements expected over the next 12 months. But the best thing for MRK shares might be some unforeseen positive surprise—there are few obvious catalysts for 2022.

The Skinny: Walgreens was one of those stocks that just stumped first-level investors back in 2020. After all, how could a pharmacy—one of the few retailers allowed to remain open during shutdowns—lose a third of its value like WBA did during the first year of COVID?

Thing is, people still largely tried to avoid any retailers, and when they did pop into a Walgreens, they were buying items with thinner margins than normal. And the “Boots” in “Walgreens Boots Alliance”—a pharmacy/retail chain in the U.K.—was simply dreadful. But the company turned things around with a market-beating performance in 2021 as life began to normalize.

What Has to Go Right: Weirdly enough, the best thing for WBA in the long-term might hold its stock back in the short term. In October 2021, Walgreens took a majority stake in VillageMD, which operates a couple hundred primary-care practices across the company—but more importantly, is the vehicle through which Walgreens is starting to offer primary care within its very own stores. WBA is looking to expand this initiative to a thousand stores within the next five to six years. December reports also claimed Walgreens was thinking about ridding itself of the Boots line, but there’s nothing concrete there.

The Skinny: Chevron rewarded patient investors with 46% total returns in 2021. A similar performance managed to pull fellow 2021 Dog Cisco’s yield low enough to escape the Dogs’ orbit, but CVX remains with a dividend that, at 4.6%, is still roughly four times that of the broader market. We can thank a lively energy market that saw oil prices whipsaw back and forth.

What Has to Go Right: More strength in oil prices. That’s tough for Chevron, because it’s very unlikely that oil prices are going to zoom ahead 56% like they did in 2021—if they did, we’d be staring at West Texas Intermediate prices of about $118 per barrel, and that just doesn’t seem in the cards. But continued economic expansion and some sort of end (or at least livable lessening) of COVID should continue bolstering energy demand and lifting CVX.

The Skinny: 5G might be a major growth driver for communications and technology companies dealing in that network tech, but so far, it hasn’t been for the major U.S. carriers. Verizon and AT&T (T) both admitted defeats of sorts in the media space last year; VZ sold off its Yahoo assets to Apollo Global Management, and AT&T said it would spin off WarnerMedia sometime in 2022. That leaves both carriers fighting with T-Mobile US (TMUS) for America’s saturated cellular market. Can you blame shareholders for bailing?

What Has to Go Right: Good results from TracFone, which the company bought in a deal that closed in November, would be a start. The prepaid cellular company began contributing to results at the very end of 2021. Otherwise, VZ will simply have to hope more investors are attracted to its steady business model and high dividends.

The Skinny: IBM put up a middling 2021 return of more than 11% in another year of letting shareholders down. Third-quarter earnings reported in October delivered a big hit to shares, but a temporary one—shares started to rocket near the end of the year, which brings us an interesting setup going into 2022.

What Has to Go Right: In November, IBM spun off its legacy info-tech infrastructure arm as a new company called Kyndryl (KD), which for the first time in a long time has Wall Street expecting actual growth out of IBM. By pushing Kyndryl off to sea, IBM can focus more on the cloud and other more promising technologies—without sacrificing the dividend, no less. It’s a win-win for the Dividend Aristocrat, or at least that’s what the market signaled in late 2021.

The Skinny: Dow’s forgettable 7% return last year was primarily supplied by its outsized dividend. Otherwise, the business simply didn’t rebound like many others did—economic uncertainty coupled with supply-chain issues for key components led to inconsistent results and a disappointing stock performance.

What Has to Go Right: Like many other cyclical plays, Dow primarily needs demand to pick back up, and things were trending in that direction as of its most recent quarter. “We continue to see robust end-market demand that is expected to extend into 2022, coupled with near-term logistics constraints and low inventory levels across our value chains,” said Dow CEO Jim Fitterling. Higher commodity-chemical prices could also help Dow perform more respectably in 2022.

Don’t Retire in the Poorhouse: Let Me 4X Your Dividend Income

While a couple of these Dogs have potential, most of them look like they could be repeat dogs yet again in 2022.

More importantly: Trusting your retirement to blue-chip stocks is, counterintuitively, the most dangerous mistake you can make. In fact, if you put all your money in blue chips like the S&P 500 or the Dividend Aristocrats, it’s pretty much mathematically impossible for you to earn enough to retire comfortably.

That’s because, for the most part, their miserly yields can’t keep up with inflation.

But with my “Perfect Income” portfolio, the math almost always works out, thanks to dividend stocks that provide several things retirees need:

Many of my readers have told me that these stocks have doubled and even tripled the dividends they were earning from their old income portfolios.

Take control of your financial legacy today. Let me show you how to get up to 4x your dividends with this simple, straightforward system. Click here to get a FREE copy of my Perfect Income Portfolio report, including tickers, dividend yields, full analyses of each pick … and a few other bonuses!