“Don’t Fight the Fed” was chapter 4 in investing wizard Martin Zweig’s legendary book Winning on Wall Street. He devoted 40 thoughtful pages to teach readers why they should “go with the flow” with respect to the Fed’s trend at any given moment.

As we recently heard from Fed Chair Jay Powell himself, the Fed is fixated on tapering. That is going to send a select group of dividend stocks to the moon.

I’m talking about “Fed-driven” price gains of 136% here—and 161% dividend hikes, too. (Those numbers aren’t pulled from the air; they’re exactly what was delivered by one of the three overlooked regional-bank stocks we’ll discuss below. And they’re just the start.)

Like toddlers, investors have been spoiled as Powell’s money printer quantitative-easing program pumped $80 billion of freshly minted greenbacks a month into government bonds, plus $40 billion into mortgage-backed securities.

Those buys have slashed interest rates and sent the money supply soaring—with plenty of that new cash rolling straight into stocks. It’s no coincidence that the S&P 500 has tracked the surging money supply straight through the crisis: 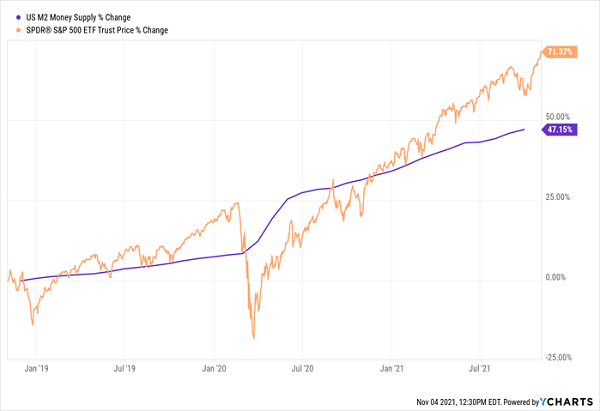 At last Wednesday’s Federal Reserve meeting, Powell finally started to kick that habit, saying the Fed will cut $15 billion a month from its government-bond buys, starting later in November.

That’ll likely cause our spoiled investors to throw a tantrum! But that’s a sideshow: what Powell is really telling us is simple: buy bank stocks—particularly small banks, because they’ll be the biggest winners. And who are we to argue with Powell’s—and Zweig’s!—advice?

All of this loads up Treasury yields for a bounce above 2% by the time the Fed exits the market. That may not sound like much, but it’s a 25% rise from here. That sets up a huge profit windfall for banks, as Treasury yields set the rates banks charge on consumer loans.

Powell is, in fact, giving us a two-for-one deal here. He’s artificially depressed rates and bank profits, letting us buy their stocks cheap in relation to their future profits. He’s also (still) printing a lot of money, which is increasing loan demand.

Plus, Jay is such a good guy that he’s keeping the Fed’s overnight-lending rate (at which banks lend to one another) at zero, at least for the next few months. This means the spread between banks’ borrowing costs and lending profits is growing.

All of this makes our banking play pretty clear. And we’re going after regional banks because their nimble shares are hyper-tuned to Treasury yields. You can see that in the performance of the SPDR S&P Regional Banking ETF (KRE), in purple below: 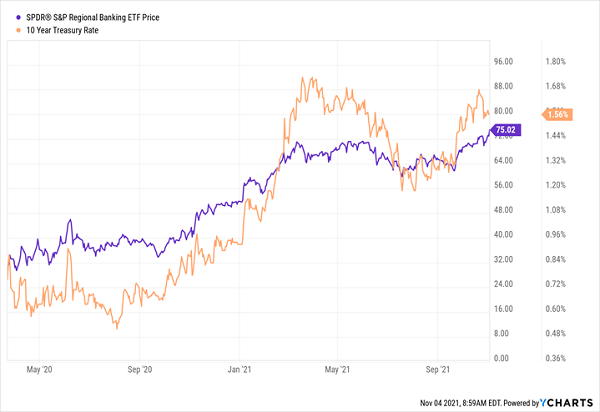 That’s part 1 of our taper-driven small-bank play. As for parts 2 and 3, we want small banks that are hiking dividends or buying back shares—and ideally both. That’s because both dividend growth and buybacks ignite share prices. (And now is an ideal time to hunt for buybacks, with repurchases likely to break the all-time record of $224 billion in the third quarter, according to S&P Dow Jones Indices.)

Buybacks reduce a company’s share count as management repurchases its shares and cancels them. That boosts earnings per share, driving up share prices as investors take note.

You can see buybacks’ effect on share prices with Regions Financial (RF), a holding of the regional-banking ETF we just mentioned. RF has branches across the South and Midwest and yields 2.8% today. The bank’s buybacks over the last five years have provided a floor for the stock, sending it higher as management slashed shares outstanding by 21%. 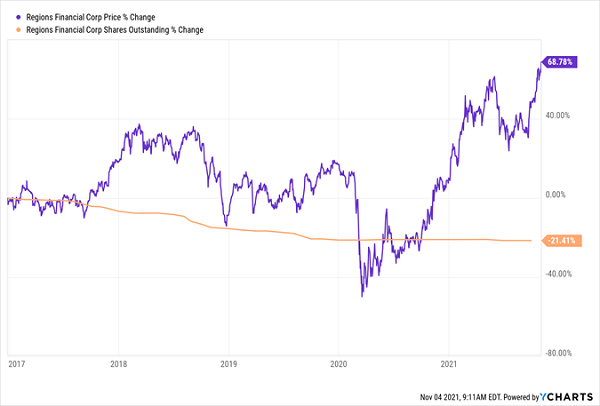 Now let’s talk dividends—because few people realize that they, too, ignite share prices. And payouts are set to get a boost as Powell eases off his Treasury buys.

The connection between dividends and share prices, a phenomenon I call the “Dividend Magnet,” is easy to spot. Let’s layer in Regions’ rising payout (in blue below) to the chart we just looked at. You can see the price grinding higher with every dividend hike (the gap between Regions’ share price and dividend is our upside): 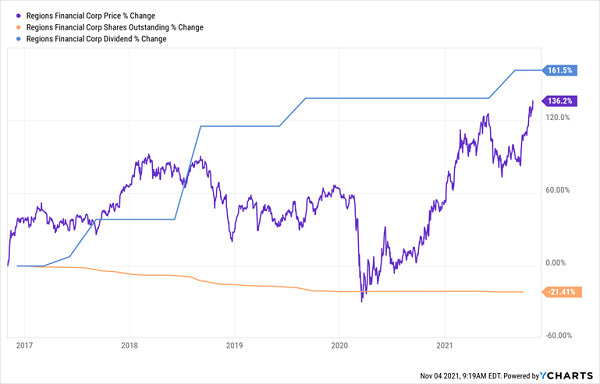 Supported by its buybacks and surging dividend, Regions’ stock snapped back from the 2020 crash. Further tapering by Powell will power both dividends and buybacks, pushing Regions’ shares higher still!

By the way, this is far from just a “one-bank” phenomenon. Let’s pull out a couple more of our ETF’s holdings—you’ll quickly see the exact same setup in action, making these banks nice “taper takeoff” plays, too!

Like with Pennsylvania-based PNC Financial Services (PNC), which yields 2.4% today: 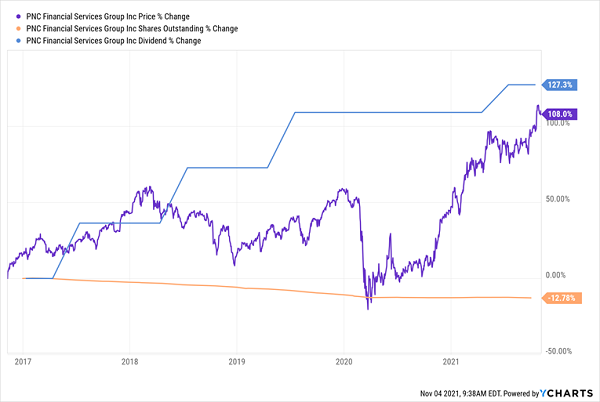 Finally, there’s Pasadena-based East West Bancorp (EWBC), a 1.6%-yielding small bank that, in addition to its US branches (in New York, California, Georgia, Nevada, Massachusetts, Texas and Washington), has a presence in China.

EWBC has boosted its payout 65% in the past five years, driving a near-parallel gain in the stock price (with a smaller percentage of shareholder returns in buybacks). 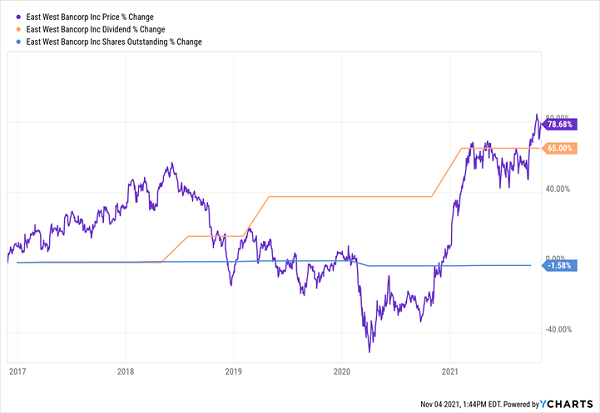 Jay Powell isn’t just telling us to buy small banks! There are plenty of other stocks with “taper-driven” upside, and the time to buy them is NOW—before the Fed’s bond buys start shrinking later this month.

Topping the list are the 7 “Hidden Yield” stocks I’ll give you full details on right here. Each one is primed to hand you a solid 15% a year (at least) in dividends and price gains—enough to double your nest egg every 5 years!

The best thing about these stocks is that their payouts (and buybacks) are big enough to keep their share prices rising no matter what happens with the economy, the wider market or interest rates.

Click here and I’ll give you everything you need to know about these 7 urgent buys—names, tickers, dividend-growth histories and my complete analysis of their operations.