The software giant yields a respectable 3.1% today. That’s not enough income for my high single-digit income goals. Granted, it could be in a few years if Microsoft is able to continue its breakneck rate of dividend growth.

It’s boosted its payout at an annualized rate of 17.6% in the last five years. It also managed to hold its payout steady during the dark days of the Great Recession.

But can it keep up this pace? I’m concerned that it can’t. Let’s take a closer look using some of the benchmarks I use to pick stocks for my Hidden Yields research service.

If you’re wondering why I’m zeroing in on Microsoft’s dividend and not, say, its new(-ish) CEO or the products it rolled out last week (including two new smartphones and its first-ever laptop), the reason is simple: companies that pay—or better yet regularly hike—their payouts outperform in the long run.

A study by Ned Davis Research tells the tale: in the 43 years between January 1972 and December 2014, companies that grew their dividends posted a 10.1% average annual return, while those that held their payout steady returned 7.6%. Stocks that paid no dividends averaged 2.6%, barely enough to keep up with inflation.

If you’re on the hunt for a stock with potential for dividend hikes, the most important figure to look at is the payout ratio, which shows how much of its earnings are making their way into shareholders’ pockets as dividends.

As the chart below shows, MSFT’s trailing-twelve-month payout ratio has spiked in the past two years: 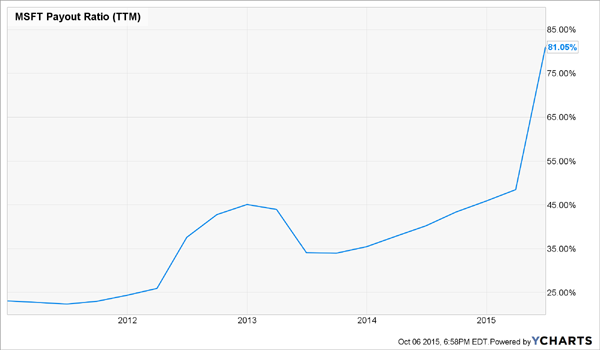 At its current level of 81.5%, the company is paying out far more of its profits than the sub-50% I like to see in dividend stocks (note there are a few exceptions to that, such as REITs).

This high ratio suggests the pace of future increases could slow, barring a big upward move in earnings. That hasn’t happened yet under CEO Satya Nadella, who took over from Steve Ballmer on February 4, 2014, but it could if the company’s shift toward mobile and cloud computing continues to gain traction.

Not so “Special” Anymore

The company’s high payout ratio also makes it less likely it will do something else I like to see: pay a regular special dividend. Microsoft is no stranger to one-time payouts: it famously paid out $3.00 a share in 2004, but it hasn’t delivered investors a similar gift since.

Special dividends are a great sign of an undervalued stock, because most investors overlook them entirely. That’s because sites like Google and Yahoo! Finance fail to account for special dividends in their dividend-yield calculations, since they see these payouts as “one time” in nature.

Buybacks Are a Plus … But Timing Is Crucial

In addition to regular dividend hikes and at least the occasional special payout, I like to see a company regularly buy back its own stock.

When it does, it increases earnings per share (because it cuts the number of shares outstanding), which tends to boost share prices and encourage dividend hikes.

But there’s a caveat: management must get the timing right, because buybacks only make sense when the stock is a good value. Otherwise, there are better uses for the company’s cash, like investing in the business or hiking the dividend.

Here’s what Warren Buffett said about ill-timed buybacks in his latest letter to Berkshire Hathaway shareholders: “Berkshire’s directors will only authorize repurchases at a price they believe to be well below [Buffett’s italics] intrinsic value. (In our view, that is an essential criterion for repurchases that is often ignored by other managements.)”

So where does Microsoft stand on this point? The latest figures suggest the timing of its latest buybacks may be poor.

The stock has jumped 24% since Nadella took over, but earnings haven’t kept pace, resulting in a sharp rise in MSFT’s trailing-twelve-month price-to-earnings ratio, to around 31.8 from around 13 in early 2014. 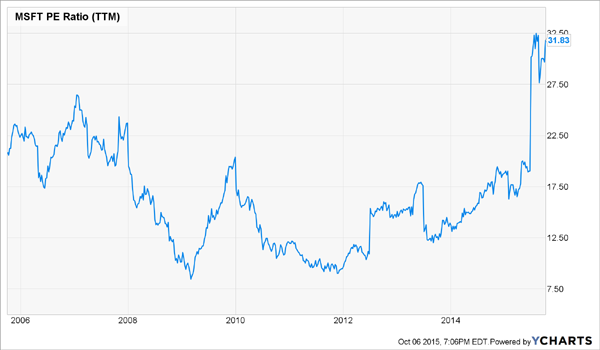 Meanwhile, the company devoted $4.2 billion to buybacks in its fiscal 2015 fourth quarter (which ended June 30), up from $1.1 billion a year ago—so it’s spending more on buybacks when the shares are pricier and less when they’re cheaper.
For all of fiscal 2015, Microsoft spent $13.2 billion on buybacks, more than double the $6.4 billion it spent in fiscal 2014. As of June 30, it had $21.9 billion left on a $40-billion repurchase program that kicked in on October 1, 2013. There’s no expiry date on the plan, but the company plans to wrap it up by year-end.

At the end of the day, the potential for sharply higher shareholder yield at Microsoft doesn’t look as good as it did three or four years ago.

But the company is much different now than it was then, when it was led by Steve Ballmer, under whom Apple (AAPL) lapped it in just about every conceivable category: portable music players (seen a Microsoft Zune lately?), smartphones (“There’s no chance the iPhone is going to get any significant market share,” Ballmer famously said in 2007) and tablet computers.

Strong sales of recent products, such as the Surface Pro 3, plus an 88% year-over-year jump in commercial cloud revenue in Q4, signal that Nadella’s “mobile first, cloud first” strategy is starting to pay off. That’s a great reason to be excited about the company’s future—and to keep it on your watch list.

But for now, I’m urging income-focused readers to look at more “surefire” yield plays that aren’t as speculative as Microsoft. To find secure 7%+ payouts, I used a three-step system to find high yielding issues that won’t show up in a Google or Yahoo! Finance stock screen. Learn all three of my loopholes to find “invisible” dividends here.