So if you’re simply tracking the index through an exchange traded fund, congrats. That’s a decent gain.

But I’ve got one simple trick—and a far superior fund buy—that can help you do even better … and grab a big chunk of your gain in cash, too.

Covered calls are a strategy in which investors buy stocks and sell call options against those stocks.

Think of call options as a kind of insurance; investors buy them if they are short the market and want to protect themselves from blowing up in case the market rallies. If you sell those options to investors, you’re essentially becoming an insurer, giving these gamblers the protection they crave to cover their risky bets.

(My colleague Brett Owens recently wrote an article on the many benefits of a covered-call strategy. You can read it here.)

Selling call options doesn’t always produce a higher return than just betting on the stock market. But it does work t times when volatility is high and investors are growing more and more twitchy. Times like, say, when Washington threatens high trade barriers, and a much-promised overhaul of the nation’s tax system looks like it’s on thin ice.

This is precisely why the Nuveen S&P 500 Dynamic Overwrite Total Return Fund (SPXX) has delivered a much higher total return than the S&P 500 SPDR ETF (SPY), the benchmark for the index as a whole, since November: 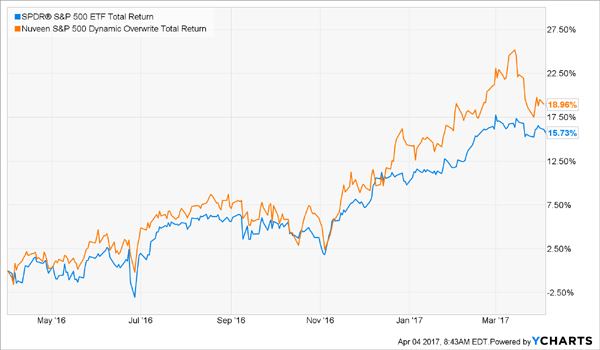 Notice how the two funds rose in lockstep before the election, with SPXX slightly outperforming SPY. That’s because SPXX is long the S&P 500, just like SPY, but it gets extra income by selling call options against its holdings.

Interestingly, we don’t see the same thing happening when it comes to the biggest of the big-cap stocks. The SPDR Dow Jones Industrial Average ETF (DIA) has pretty much had the same performance as its call option–selling peer, the Nuveen Dow 30 Dynamic Overwrite Total Return Fund (DIAX), in the last 12 months:

No Call-Option Boost for the Big Names 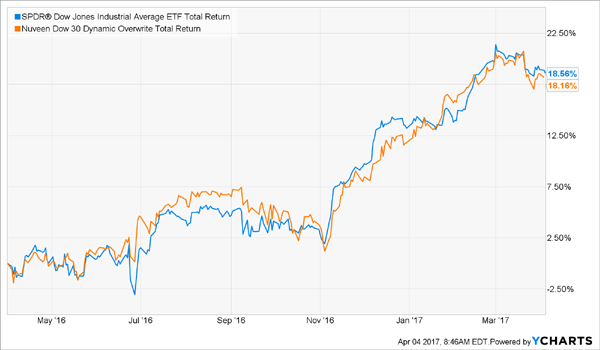 So why did SPXX outperform while DIAX matched its benchmark index’s return? The answer is simple: the need for insurance.

While the overall market has been cautious for a while, large cap stocks have seen a lot less selling pressure than smaller companies during particularly volatile times. Meantime, investors’ ongoing nervousness about the Trump bump has helped the Dow Jones Industrial Average—which contains 30 of the biggest names on the market—outperform the broader-based S&P 500: 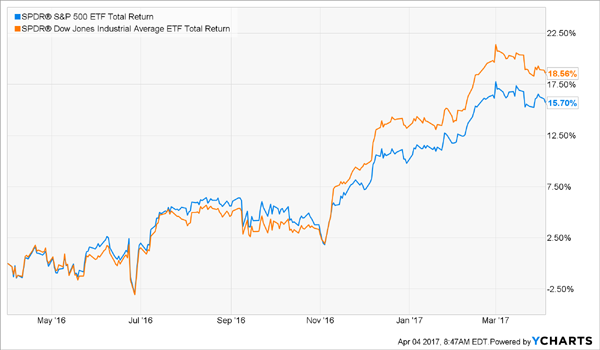 That doesn’t mean now is the time to jump into Dow stocks, however. Some Dow constituents are strong and some are weak, and the need to be careful with big-cap stocks grows the longer they outperform the market, since these periods of outperformance don’t tend to last long.

So what’s an investor to do? Besides simply being choosy, you might want to consider opting for DIAX instead of DIA.

I say this for three reasons.

Investors who buy DIAX will get a dividend yield of 6.6%, based on the fund’s last payout, while DIA offers a measly 2.2%. The reason for that higher dividend is the cash that call-option buyers are paying DIAX for the options the fund sells. Those cash payments—called option premiums—are then returned to investors as cash dividends on top of dividends from the companies DIAX owns.

The difference in yield is dramatic. DIAX will pay $1,100 per month to anyone holding $200,000 worth of DIAX shares, while that same investment yields just $368 per month from DIA. If you really love large cap stocks and really want to own DIA, you can just invest those cash dividends into DIA every quarter when you get your payments from DIAX.

The important point here is that you’re getting that cash from the fund without the fund having to sell a single stock, because the cash from its option-selling strategy and the dividends from the companies it owns are enough to fund its 6.6% payout.

Remember that call options are insurance. When DIAX sells that insurance, the fund is effectively hedging its position in the market. The cash it gets from those options is cash, and it’s credited to the fund pretty much immediately. DIA doesn’t get regular cash payments in the same way.

This is the power of hedging your bets, and it’s why sophisticated investors love call options: more cash in hand now, less downside risk later.

No. 3: A Terrific Discount, to Boot

The final reason to consider DIAX is the most compelling. The fund is trading at a pretty big discount to its net asset value, or the value of the stocks it holds, even though it’s traded at a premium to its NAV more than once in the last five years:

Buying the Dow on the Cheap 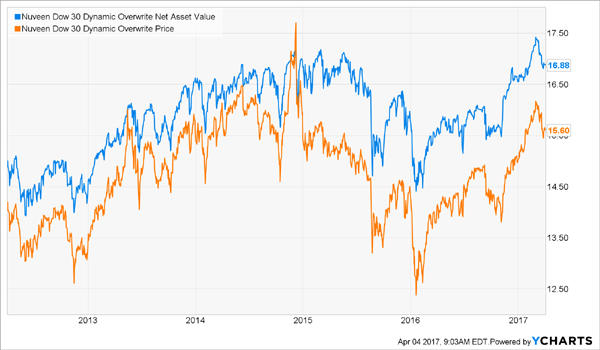 What this means is that anyone who buys DIAX now is getting exposure to the entire Dow Jones index and paying less than market value for those stocks. In fact, you’re getting the Dow Jones Industrial Average for 7.5% off, while also getting the fund’s consistent high yield and exposure to the safest group of stocks on earth: US large caps.

DIAX is a good fund, but buying it and sitting on it for a decade is still far from the best move you can make.

Because just like the first-level investors who buy SPY and call it a day, you’ll be passing up a golden opportunity to not only track the market but clobber it handily.

Not only that, you’ll be pocketing yields up to 10.1% while you do.

All you have to do is dig just a little bit deeper … and in reality, you don’t even need to do that, because we’ve done it for you.

I’m talking about the 6 income plays in our new “8.0% No-Withdrawal Retirement Portfolio.” This potent collection of investments is even more diversified than DIAX, and all 6 of its holdings are run by sharp managers who use the same kinds of strategies to hand you outsized income and crash insurance, too!

Plus, thanks to their average 8.0% yield (and 10.1% at the top end!), you’ll generate enough income on even a modest nest egg to live on dividends alone—and never have to sell a single stock to generate cash in retirement.

Thousands of Americans have already flocked in to take advantage of this portfolio’s steady income, upside and extremely low volatility since we launched it a few months ago, and today is your chance to join them. All you have to do is click here to get immediate access and start profiting now.