Today I’m going to show you why the pundits have this market rally all wrong—and how a group of little-known investments called closed-end funds (CEFs) are the best way to cash in as stocks head higher from here.

Why do I say higher?

Because as I wrote back on March 30, this market is rising for the right reason: soaring earnings.

According to FactSet, first-quarter earnings are up 12.5% for S&P 500 companies that have announced so far, and earnings per share revisions are far more likely to skew upward than downward.

But you wouldn’t guess that from the alarmist warnings out there. A couple months ago, CNBC reported that George Soros bet “big” against the stock market, and hedge fund legend Paul Tudor Jones warned that the stock market’s current valuation is “terrifying.”

Stocks are up over 1% since then.

You might worry that you’re too late. The stock market is going gangbusters and you listened to the doomsayers, so now you’ve got a bunch of cash sitting in the bank, losing money against inflation.

What do you do?

Most people would simply buy an index fund, like the SPDR Dow Jones Industrial Average ETF (DIA) or the SPDR S&P 500 ETF (SPY) and benefit from the rising tide in public-company earnings.

It’s an okay strategy … but in a moment I’ll show why CEFs are even better, because they let you buy stocks at discounts of 15% and more—and collect yields five times higher than your average blue chip pays, to boot!

But let’s stick with our ETF buyer for just a moment longer.

Even if they jump in at the top of the market in the short term, they’ll come out ahead in the longer term. To demonstrate this, let’s take a quick look at both of the above funds over the last year: 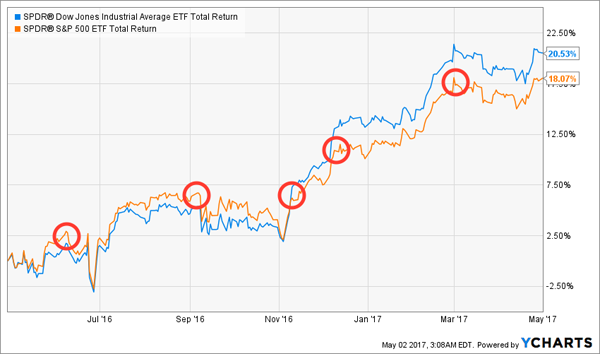 The chances of that are extremely low, for several reasons: there’s no housing bubble, GDP growth is solidly positive, labor participation is rising and wages are going up.

But even if we were on the cusp of a major economic calamity, I’d still recommend buying stocks, because even if you did so ahead of the big crash, you would have made money in the long run.

A Quick Drop—and a Quick Recovery 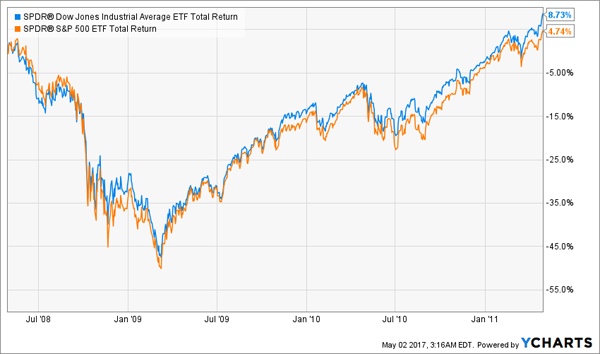 If you bought entirely just before the crash, you’d have recovered in less than three years. And keep in mind that if you reinvested dividends during the downturn, you would have recovered even faster.

But the real joy comes just a few years later.

The Power of Long-Term Investing 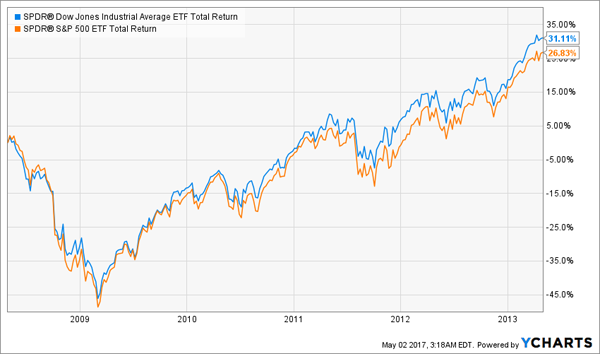 A 30% gain instead of the less than 1% interest you’re getting from your savings account? That’s a no-brainer.

But you can do even better in the next eight years—and take home an even bigger share of your profits in cash.

CEFs: High Income at a Discount

This is where CEFs come in, but not just any CEF. We want to consider those that track the market but trade at a discount to its net asset value (NAV, or the value of their underlying assets).

For instance, instead of buying DIA, where $1 gets you $1 in Dow Jones stocks, you could look at the Nuveen Dow 30 Dynamic Overwrite Fund (DIAX), which gives you $1 of Dow Jones stocks for less than $0.95. Plus the fund pays a nice 6.4% dividend yield, too!

Or there’s the Adams Diversified Equity Fund (ADX), which boasted a 7.8% payout last year, thanks to a big special dividend.

But despite its huge yield, this fund is trading at a 15.5% discount to its NAV. Plus it’s very conservative, with most of its holdings in Dow Jones or S&P 500 stocks; Apple (AAPL), Alphabet (GOOG, GOOGL), Microsoft (MSFT) and Boeing (BA) are some of its top holdings.

The 4 High-Yield CEFs Every Investor Should Own

CEFs like ADX and DIAX beat ETFs hands down. But they’re not my favorite picks in the space—not by a long shot.

That title belongs to the 4 stealth funds I reveal in my new FREE report, titled “4 Great CEFs to Buy Now: 7.5% Yields and 20% Upside Ahead.”

These funds’ discounts to NAV are all far wider than the historical average—a dead giveaway that double-digit gains are on the way, and in short order, too!

Better yet, they’ll hand you a nice bundle of cash up front, thanks to their outsized 7.5%+ average yield!

You owe it to yourself to discover this 4 unsung CEF picks and see how their high income and HUGE gain potential can boost your nest egg. Simply CLICK HERE to get all the details now.