The 7% Dividend the Recession Can’t Touch

The most reliable recession indicator in the world just flashed red—and it’s actually setting us up for 33%+ gains in the next two years.

But history tells us we can expect a fast return like this when the economy and stock market look exactly like they do right now.

I’ve got two ways for you to grab a piece of the action, one of which even hands us a growing 7% cash dividend.

And when I say “growing,” I mean it: this already-huge cash stream has grown 96% in the last 15 years, and it’s backed by the strongest stocks in America (I’m talking about the 30 names on the Dow Jones Industrial Average), so there’s plenty more to come.

More on this cash-rich fund shortly. First, we need to talk about the “recession signal” everyone’s panicking about.

That would be the yield curve, which just “inverted” for the first time since 2007. This means the 2-year Treasury was briefly yielding more than the 10-year Treasury:

That shift grabbed a lot of headlines because every time the 2-year has yielded more than the 10-year (as in this chart, where the blue line goes below the black line), a recession has followed (though there’s typically a long time lag).

However, there’s a hugely important detail the mainstream crowd is forgetting—and that’s where the 33% gain I mentioned off the top comes in. I’m talking about what happened in 1998, when, like today, the yield curve briefly inverted, then “uninverted.” 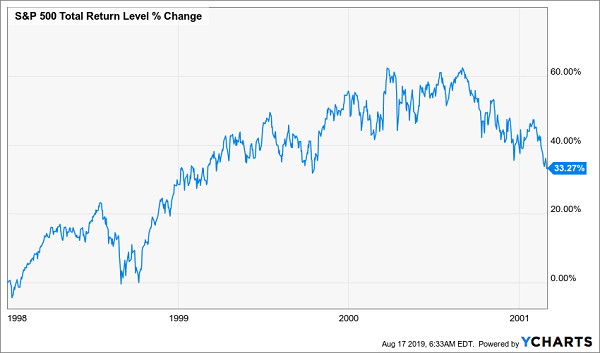 Stocks exploded 33% post-inversion before a recession did eventually arrive.

Why the big jump? Because 1998 was unlike most periods of an inverted yield curve: shortly after the yields flipped, the Federal Reserve started cutting interest rates—and that’s exactly the situation we’re in today.

This is the opposite of what happened when the yield curve inverted in 1989, 2000 and again in 2006. During those periods, the Fed kept raising rates, and economists say those hikes made recessions worse—or even started them in the first place.

Only in 1998 did the Fed respond to the inverted yield curve by starting to cut rates—and then, when the central bank went back to raising rates two years later, the recession followed in about a year.

Funny thing is, no one is talking about this right now, and it’s critical, because it tells us that the chances of a recession in the near term largely depend on what the Fed does. And with the Fed now cutting rates, a recession could be delayed for over two years. And that means letting fear get the better of you and moving to the sidelines now could cause you to miss out on a double-digit gain.

Here’s something else that tells us a recession is nowhere near: earnings blew out expectations in the second quarter, and analysts now expect profits to grow in the third quarter of 2019. Sales are still up about 4% across the board for S&P 500 companies, and US GDP growth is slated to come in above 2% this year.

This is where the two funds I want to show you today come in—they position you to profit if it’s 1998 all over again, but, just in case things do take a sudden downward turn, they build in a bit of protection, too. 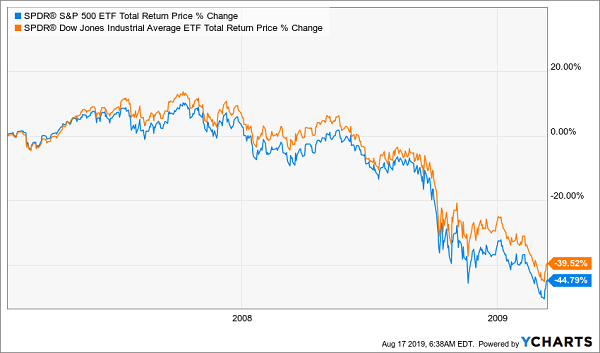 However, you’re missing a far more important piece of downside protection when you go with DIA: a strong income stream (DIA yields just 2.1% as I write this). And a serious dividend is critical when the next downturn hits, especially if you’re counting on your portfolio to fund your lifestyle. That’ s because a strong dividend reduces the need to sell your holdings in a crash—at fire-sale prices—to access cash.

This is where a closed-end fund (CEF) like the Nuveen Dow 30 Dynamic Overwrite Fund (DIAX) really shines. DIAX also holds the “Dow 30”: household names like Home Depot (HD), McDonald’s (MCD) and Apple (AAPL), but with a big difference from DIA: a 7% dividend yield—over three times bigger than DIA’s payout.

Plus, it offers something few high-yield stocks and funds do: a dividend that’s growing.

A Rare 7% Dividend That Doubled 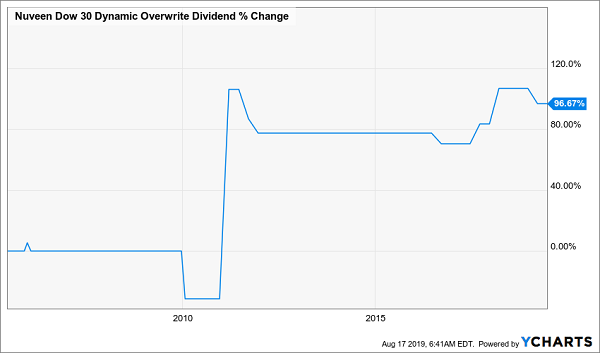 Holding DIAX will get you exposure to stocks, no matter what happens, and an income stream you can depend on. That’s a lot better than letting yield-curve fears force you to the sidelines—where you’ll miss out on solid returns.

There’s one thing you must consider before buying DIAX: like an ETF, it’s still chained to its underlying index (the Dow Jones Industrial Average, in this case).

And when recessions hit, you and I both know they hit some stocks a lot harder than others (cyclical plays like industrials, resource and consumer companies, in particular).

Now, a fund that’s completely unrestricted could simply steer around troubled sectors like these (and protect your nest egg) when trouble hits. Not so DIAX—because it must hold the 30 stocks in the Dow, it must go down with the ship!

That’s why my favorite stock-focused CEF has clobbered DIAX over any time period you can name: one year, three years, five years, a decade—and since DIAX’s inception!

Imagine This Cash Machine in Your Portfolio 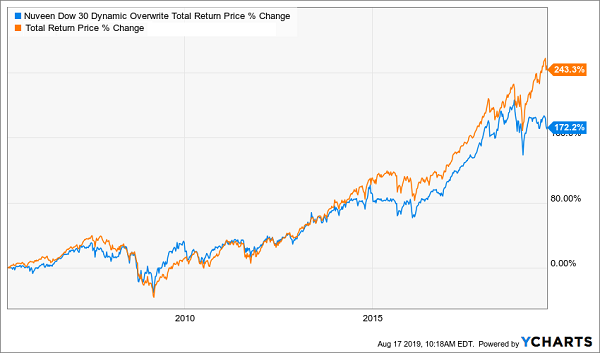 My pick is backed by the oldest CEF firm in the business: it’s been around since 1840! So you can be sure this crew knows how to handle a recession—and set you up for gains when stocks turn higher. Their performance record proves it.

And yes, this dynamic fund still holds many large caps you know well: Apple (AAPL), American Express (AXP) and Bank of America (BAC) among them. But unlike DIAX, it’s not tethered to an underlying index, so our whip-smart management team has full control to buy (and sell) as it sees fit.

Best of all, despite its massive outperformance, my pick is still cheap, trading at a 13.8% discount to net asset value (or the value of the stocks in its portfolio). That means we’re getting $1.16 worth of shares for every dollar we put in!

Which brings me to the dividend. 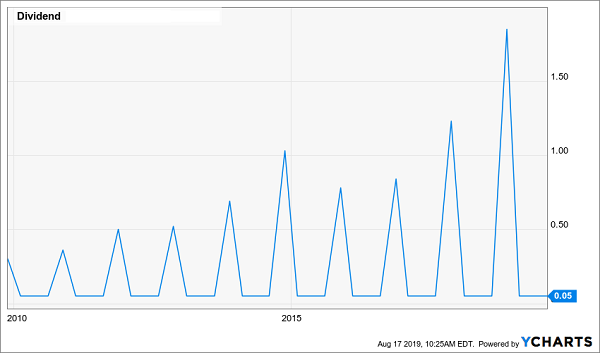 One reason why my pick trades at such a discount is its unusual dividend policy. While the fund has a mandate to pay at least a 6% dividend yield every year, it usually pays much more. But it pays the majority of its dividend at the end of the year, and the amounts vary.

That’s caused most folks to walk right by this fund, but they’re making a huge mistake, because in 2016, it paid out 8.2% in total dividends for the year, based on its price then.

See the trend? This is why my pick continues to be a huge winner for the few investors who know about it—and I’ve got it pegged for solid 9% payouts this year and beyond.

I’m ready to give you all my research on this fund and my 4 other top CEFs for new buying now, as well. Taken together, these 5 stout funds yield 8% today, and I’m calling for 20%+ price upside in the next 12 months from this “mini-portfolio, too.

It’s all waiting for you now. Click right here and I’ll give you full access to my top 5 CEFs to buy now: names, tickers, buy-under prices and everything you need to kick-start your 8%+ dividends (and upside) today.