The 8.6% Dividend Your Advisor Hides From You

When I show people how closed-end funds (CEFs) can hand them safe 7% yields and let them retire on much less than a million bucks, they often say one thing:

“Why the heck hasn’t my financial advisor told me any of this?”

The reasons are both simple and surprising: 1) Many financial advisors don’t fully understand how CEFs work, and 2) Some CEFs involve a bit of research, so for a lot of advisors it’s easier to recommend low-cost index funds and call it a day.

Both of these (unacceptable) reasons are costing folks millions in profits!

So today we’re going to demystify CEFs by zeroing in on a fund that’s crushed the market for nearly two decades. In fact, since its IPO in 2002, the PIMCO Corporate & Income Opportunities Fund (PTY) has given investors double the S&P 500’s return.

The Power of a Top-Notch CEF 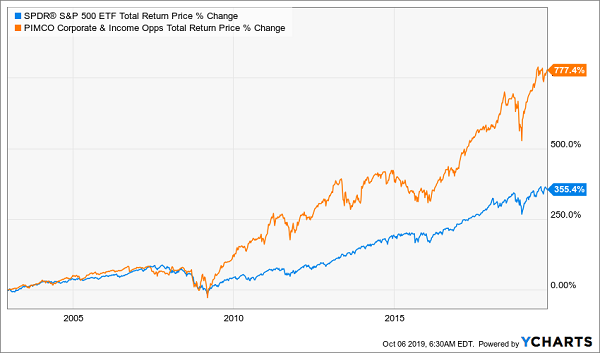 A lot of advisors dismiss funds that beat the S&P 500 in a year or two as simply lucky—but that doesn’t explain PTY’s 777% return in 17 years. And a deeper look tells us a lot about CEFs and how we can harness them to retire earlier and lock in a massive income stream that too many pros say is unattainable.

Since its inception, PTY has returned 13.6% annualized on its market price, while the S&P 500 has returned 9.3%. This outperformance is due to one factor: the fund’s inherent return, despite the market’s lower valuation of PTY.

Let me explain the difference. If we look at the value of the portfolio of assets PTY holds, we see that this portfolio has risen 784.6% since its inception, a bit above the fund’s market-price return. 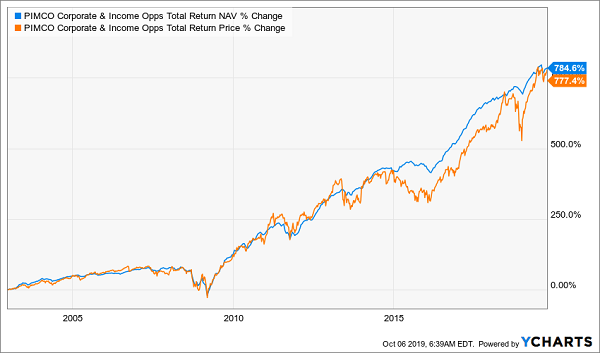 In other words, PTY’s portfolio gains and the dividends the fund has paid out, if reinvested, are greater than the market price you’d pay for PTY if you bought it now.

This is in large part compounding magic: when you reinvest 8.6% dividends in such a high-performing fund, your total return is bound to grow. But the other part of the story is PTY’s portfolio itself—the real source of its massive outperformance—and PIMCO’s skill in managing it.

Let’s take a look at that now.

A Misunderstood Fund With an Undervalued Edge

PTY’s portfolio consists of $2 billion worth of a variety of debt instruments: 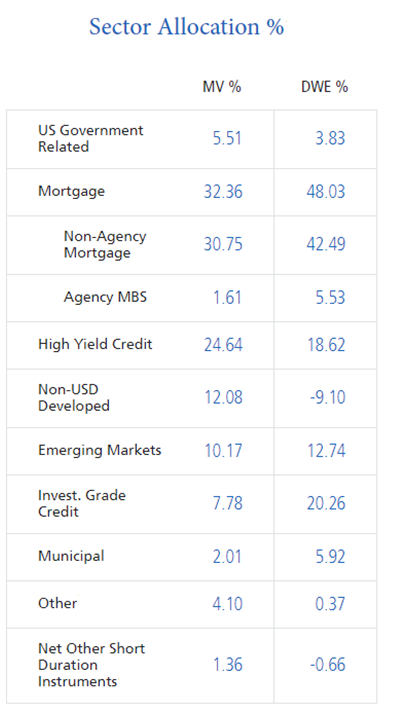 If we focus on the market value (MV) column, we see that the biggest allocation is to mortgage bonds (32.36%), separated into non-agency and agency mortgage-backed securities (MBS’s).

These are often depicted as complicated and exotic derivatives, but they’re pretty simple at their core: imagine taking a large number of mortgages, putting them together in a single portfolio, then selling portions of that portfolio to investors.

PTY would be one of these investors, because it can get less exposure to any one single mortgage, helping insulate its portfolio, even if housing crashes like in 2008. (It’s important to note that PTY survived 2008 and kept beating stocks during that crash).

The other large exposure, to high-yield credit, is to bonds from corporations with lower credit ratings. Think of this as a group of loans that companies take out and pay back at a higher interest rate. With defaults in these loans staying below 2% most of the time, it’s a lower-risk bet than many people think.

But it’s even less risky for PIMCO, because it’s the world’s second-largest bond buyer. It can access top-quality bonds and information about companies that most other investors can’t. This edge has helped PTY crush the market for decades. And since they still have that advantage, this outperformance will likely continue.

The Income Key to Financial Independence

A lot of investors hear things like “MBS’s” and “high-yield bonds” and get scared. Others cynically say that this kind of outperformance can’t last. But PTY not only survived the worst recession in living memory, its portfolio recovered faster than the S&P 500. And it paid out a high level of income throughout the crisis.

This is what really matters. Investors who held PTY during the crash saw unrealized losses in their portfolios—but they also lost no money if they didn’t sell. And PTY’s huge income stream makes it possible to hold during tough times.

Yet financial advisors tell their clients to tolerate the pathetic yield they get from the stock market, because they don’t understand how funds like PTY have been crushing the market for years. But PTY’s record speaks for itself.

And PTY isn’t the only CEF that’s crushed the index. It isn’t even the best-performing CEF, or the highest yielding. There’s a whole universe of CEFs out there that you can harness for financial independence.

Before I do that, I have to tell you that advisors aren’t the only ones trying to keep CEFs off your radar. The big fund companies are in on it, too!

I’m talking about massive providers of exchange-traded funds (ETFs), such as Vanguard and iShares. These firms throw big marketing dollars at ETFs, and because most of these funds are automated, their costs are next to nothing.

Translation: even the low management fees they collect are pure profit.

But CEFs are different: with average yields of 7% and up, they often beat ETFs on dividends alone! And that doesn’t account for the performance a top-flight human manager can add on, especially in areas like high-yield bonds, preferred stocks and real estate investment trusts (REITs).

I just showed you how PTY demolished its benchmarks while paying an 8.5% dividend—and bear in mind that its return is net of fees.

I don’t know about you, but I don’t mind paying a few hundred bucks more in fees if it will net me a market-crushing 777% return!

Which brings me to the 5 CEFs I want to show you now. They’ve delivered their shareholders life-changing gains, they yield 8% on average (with the highest yielder of the bunch paying an outsized 9.3%), and they’re all bargains now.

The upshot: they’re primed for 20%+ price upside in the next 12 months or less!

Don’t miss out. Click here and I’ll tell you everything you need to know about these 5 hidden 8% yielders: names, tickers, buy-under prices—everything my research team and I have on them.