When most people think of e-commerce, the first name that leaps to mind is Amazon.com (AMZN). There’s good reason for that: according to Macquarie Research, the retail giant accounted for more than half of all e-commerce growth last year.

Put another way, of every extra dollar Americans spent online in 2015, $0.51 went to Amazon. But be that as it may, Amazon, with its razor-thin profit margins, lack of a dividend and nosebleed P/E ratio of 426, is far from my favorite way to play this trend.

Instead, I prefer a “pick-and-shovel” company that’s about as old school as they come: the 109-year-old United Parcel Service (UPS).

(If you’re unfamiliar, “pick and shovel” refers to the California gold rush, when the only people who really got rich were the shopkeepers who sold the picks and shovels to the gold-seekers, not the prospectors themselves.)

Now if you’ve scanned the business news lately, you may think shippers like UPS and FedEx Corp. (FDX) are about to be “disrupted” by Amazon itself, which is looking more like a delivery company every day.

This worry has caused plenty of investors to steer clear of UPS, which counts Amazon as its biggest customer.

Their concerns aren’t unfounded. After all, the retail giant has made no secret of its plan to take more control of how its goods get to shoppers’ doorsteps. And with shipping costs gobbling up 12.5% of Amazon’s revenue in Q4, up from 10.9% a year earlier, it’s easy to see why.

But I believe investors are blowing the situation way out of proportion.

Why? For one, the “biggest customer” label paints a distorted picture: according to the Wall Street Journal, Amazon’s deal with UPS generated roughly $1 billion in revenue last year. That’s a lot of money by any stretch, and it’s grown quickly—five fold, in fact, since 2005, the newspaper says.

But focusing on one client ignores the breadth of UPS’s business. Consider that Big Brown’s total revenue clocked in at $58.4 billion last year, which would put Amazon’s share at about 1.7%—not exactly what you’d call a heavy reliance.

What’s more, these deliveries aren’t terribly profitable. That’s because Amazon is a master at pushing suppliers for big discounts, and UPS is no exception. According to TheStreet.com, the company negotiated delivery rebates upwards of 70% when it launched Amazon Prime in 2005.

That’s why I’m not worried about the relationship between UPS and Amazon. Instead, my eye is on the other 49% of e-commerce’s growth. That’s where the profits really are for shippers, because it’s driven by smaller companies who are much more likely to pay the full rate. And UPS is perfectly positioned to snag a bigger slice of that business.

What’s more, the company enjoys an economic moat research firm Morningstar calls “the widest among all freight-transportation firms.” It bases that view on the massive network, computer systems and skilled labor the company has built over its long existence. These assets would take a lot of time and money to match—even for a seasoned disruptor like Amazon. 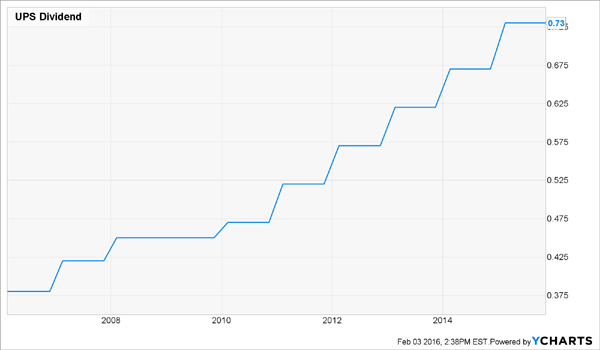 What’s more, it’s raised its dividend significantly over the past 15 years—to the tune of 21.9% annually, on average. More hikes are almost certainly on the way: in 2015, UPS generated free cash flow (or operating cash flow minus capital expenditures) of $5.0 billion, twice the $2.5 billion it paid out in dividends.

This is where the buyback program comes in. In 2015, the company spent $2.7 billion on repurchases, taking 27 million shares, or 3.0% of its current total outstanding, off the market. That’s the same amount UPS spent in 2014, and it’s planning to spend another $2.7 billion this year.

These buybacks put more money in your pocket, as they boost per-share profits and magnify the company’s dividend hikes, because it has fewer shares to pay out on. 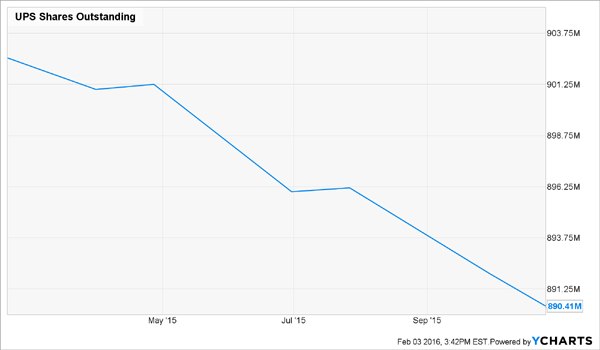 The business continues to look healthy: last Tuesday, UPS reported Q4 earnings per share of $1.57, up 26% from a year earlier and $0.15 ahead of the Street’s forecast.

Revenue rose 0.9%, to $16.05 billion, coming up just short of consensus, but it gained 2.4% on a constant-currency basis. UPS saw a 1.8% rise in the number of packages delivered in Q4, along with higher operating margins across its divisions.

And thanks to the market’s January tumble, the stock still offers good value. UPS’s forward P/E ratio of 16.6 is well below its five-year average of 18.5.

But even though UPS looks like a good buy now, I still prefer another stock that never has to worry about an upstart tech firm stealing its customers.

That’s because it’s in a business with even higher barriers to entry than UPS. And with 10,000 baby boomers hitting retirement age every day for the next 15 years, its core business is set to boom for at least the next 3 decades!

Better yet, it throws off a fat 7.5% yield, or more than twice what UPS pays. And thanks to the biggest demographic shift in US history, I fully expect its payout to double in the next decade.

Few investors have ever heard of this recent spinoff, but that’s changing. I expect its share price to soar 15% to 20% as income-starved investors rush in to tap that rock-solid payout.

Don’t miss out. Click here for this company’s name and ticker—and the backstory on two more high-yielding picks I love to play this unstoppable mega-trend.