The Best Way to “Trade-War Proof” Your Portfolio (with 4.3%+ Yields to Boot!)

You’d be hard pressed to find anyone that can live on that.

What makes the situation far more difficult is the state of the stock market.

It’s not as if you can depend on your average stock anymore.

With the trade war escalating, it’s been a confusing time for investors. 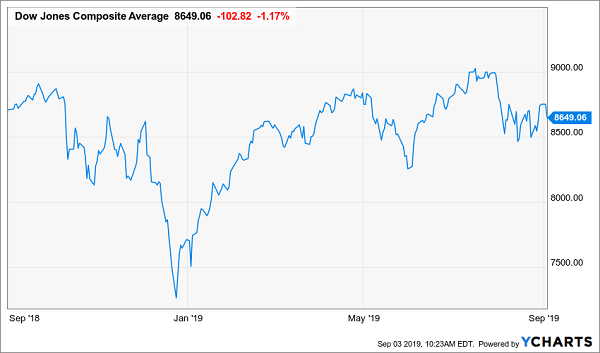 Contradictory claims from both sides have given way to extreme optimism, and pure grief when all goes south.  China just retaliated days after saying they wouldn’t, for example. President Trump tacked on 15% in tariffs on $110 billion worth of imports.

And along the way, your average stock has been beaten silly.

Massive industries are warning the trade war could cripple them.

Dollar Tree was forced to raise its second quarter inventory levels about 15% in a scramble to import more goods from China ahead of higher tariffs.

Deere & Co. was forced to cut production by up to 20% in the second half of the year. Del Monte said it was closing U.S. plants and cutting hundreds of jobs thanks to higher costs.

Companies including Adidas, Converse, Crocs and Nike joined retailers like Foot Locker and JC Penney in a request to President Trump to end the trade war.  “There is no doubt that tariffs act as hidden taxes paid by American individuals and families,” they said. “It is vitally important that the President knows his new taxes are going to hurt both their employees and families who buy shoes.”

And of course, tech stocks like Apple, Intel, and a host of others are in real trouble.

Unless you’re trading the short side of the market, you don’t want exposure to any of that.

The Solution Can be Found with “Pullback Proof” Yields

At the moment, you want the least sensitive trade war stocks.

Especially if you want to actually make money in this trade-war-fearing market.

That includes REITs, which are some of the least sensitive dividend stocks you can own.

The best part – just 13% of REIT revenue actually comes from overseas. That means your average REIT yields and cash flows will remain safe in the trade war.

Plus, REITs are perfect for times like these because they move independently of the overall market.  We can see this by taking a look at one of the most popular REIT ETFs, the Vanguard Real Estate ETF (VNQ), which has moved up nicely since the trade war first began, as compared to the intense volatility of the Invesco QQQ Trust (QQQ) and the SPDR S&P 500 ETF (SPY). 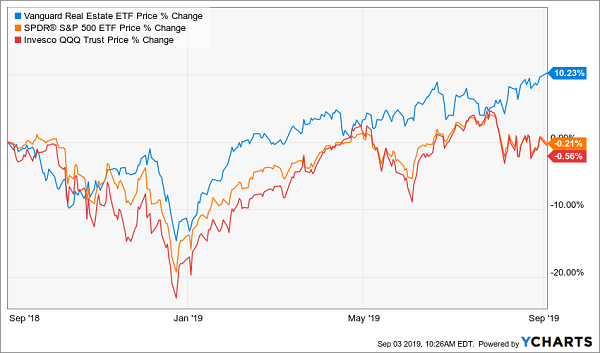 For example, as the trade war has raged on and on, we’ve seen quite a few REITs buck the downtrend with great dividend payouts.  We can see that with Lexington Corp. Properties Trust (LXP) for example. LXP pays a dividend yield of 3.94%. Even the Sabra Healthcare REIT (SBRA)—with an 8.36% yield—has run higher, despite market conditions. 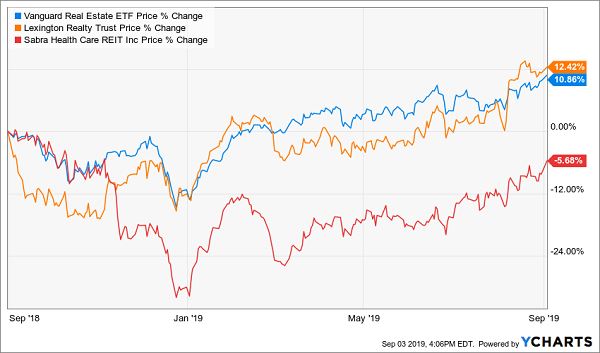 The Top Recession Proof REITs Are Driven by Baby Boomers

Healthcare is one of the most unbeatable recession-proof investments around.

After all, we can’t stop people from getting sick, or from aging.  Plus, aging baby boomers are a substantial catalyst. Since the very first baby boomer filed for social security benefits on October 15, 2017, 80 million more were in line to do the same through 2027.

Five years after that, the number of people aged 65 and up will outnumber those under 18.

So, it’s no surprise that investments in healthcare real estate has risen dramatically in the last five years, with investors betting that medical facilities will be increasingly important to an aging population. Medical building sales in the U.S. hit nearly $10 billion in 2019, a figure that has doubled from 2014, according to JLL Research.

“Many institutional investors are realizing that healthcare property returns have been pretty solid and steady over time,” notes Jay Johnson, a JLL managing director and National Practice Lead for Healthcare. “We expect that trend to continue for the foreseeable future, which explains growing interest from institutional capital.”

All of that has made healthcare virtually recession proof.

So, we can look at REITs like Ventas (VTR), one of the largest and most diverse healthcare REITs on the market.  At the moment, it carries a market cap of $27.44 billion, with more than 1,200 properties in its portfolio. 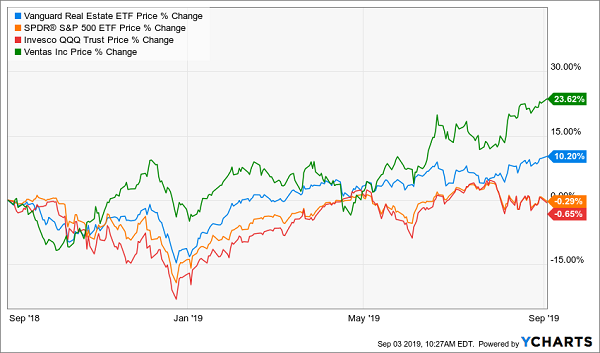 The best part—it’s a well-diversified REIT.

At the moment, seniors housing makes up to 52% of the portfolio by income. Another 20% is outpatient care with 20 million sq. feet of medical office building (MOB) space in 360 properties across 32 states.  Another 8% comes from research and innovation (R&I) centers.

The best part – according to Ventas, “with demand in the $140+ billion life science real estate market expected to rise to more than $170 billion within five years, the R&I portfolio is the Company’s top capital allocation priority, with more than $2 billion invested since 2016.”

Another 6% of its income comes from health systems.

Even better, the company has been growing its dividend consistently for more than a decade.  At the moment, Ventas pays a yield of 4.3%. While its dividend yield has pulled back from its lofty highs above 6.4%, that’s because of the REITs strong move north. 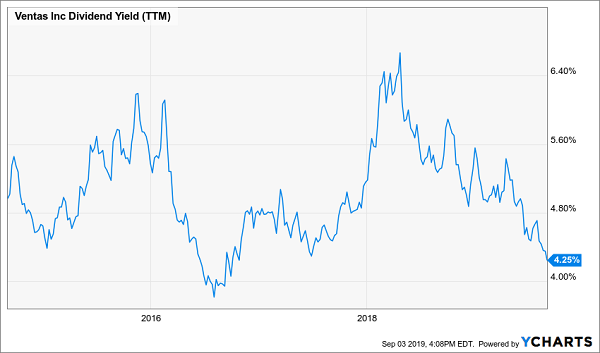 In short, Ventas is a solid opportunity, thriving as a recession-proof REIT backed by boomers.

It even carries a respectable yield of 4.3%, which is great for a lot of investors.  Unfortunately, it’s not good for our five stock “Pullback Portfolio.”

Instead, we require much bigger returns that’ll safeguard your portfolio and provide the sky-high, consistent returns we’re all after, including:

The best part—8.2% is just the average yield.  One of these giants pays a consistent 10.4% yield.

In today’s excessively volatile market, those are the yields you need for retirement immediately.  Unless, of course, you want to wait a bit longer to retire—or make real money.

Better, all have stood out when markets have shut down – with reliable income you must have.

Click here and I’ll share the names of these five ultimate income investments, including their tickers and ideal buy prices along with our full analysis and research.