The Cheapest 8.8% Dividend on the Planet

The Bank of England has recently aroused financial animal spirits with its on and off and on again buying of long-dated bonds. Which has this 8.8% payer—and more like it—ready to rally like crazy.

But wait, isn’t this a bear market? Brett, the financial media is telling me that interest rates are going to the moon. And that my cheap bonds are about to get even cheaper.

They don’t call us contrarians for nothing! It’s our job, as original thinkers, to identify inflection points in the market. And we have one that is setting up for a big bond bounce. Here’s why—and what to buy to play it.

First, the “why.” How is the jolly ol’ BOE buying these bonds? The bank is printing money to buy them.

In doing so, the BOE puts a lid on rates, at least in the short-term. This is bullish for bond prices, with the bank providing a backstop. Yee haw!

(And inflation? That will be tomorrow’s problem—yet again.)

Of course, we Americans can’t let the Brits have all the fun. Cue a timely story from the Federal Reserve’s The Wall Street Journal reporter Nick Timiraos.

Some believe Timiraos is Fed Chairman Jay Powell’s squeaky wheel of choice. When Powell wants to leak a story, he calls Timiraos, who “broke the news” a few months back that a Fed hike was going to be higher than anticipated (which it was). Now? Timiraos reported on Friday that Fed officials are thinking of cooling their rate hike engines in December.

A lid on rates here in America too? Buy bonds would be the billboard.

We contrarians love closed-end funds (CEFs) as our fixed-income vehicle of choice. CEFs often pay big dividends. Today, they are largely washed out and waiting for us in the bargain bin.

When markets drop, as they have all this year, CEFs fall with a thud. Investors who own them panic and sell at any price—even as low as 72 cents on the dollar!

Professional investors, meanwhile, can’t scoop up these bargains as fast as we can. Institutions with millions and millions of dollars to deploy will typically put cash to work in the big, liquid S&P 500 or a long-dated Treasury bond fund like iShares 20+ Year Treasury Bond ETF (TLT).

We highlighted TLT a couple of weeks ago. If rates calm down, TLT should pop too. The big vanilla crowd should do alright with this popular fund.

We can do better than “alright,” because we are smaller and nimbler. Yup: We can buy the cheapest funds on the planet for dimes on the dollar.

Let’s take the Highland Income Fund (HFRO), which yields 8.8% and trades at a 28% discount to its net asset value (NAV). This is an unbelievable discount. 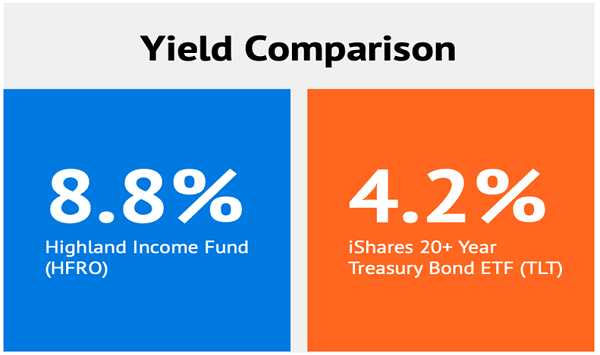 Why the bargain bin? Is HFRO poorly run? Anything but. Manager Jim Dondero is a savvy income investor with a contrarian mindset.

Jim simply runs a smaller fund that can’t absorb big bucks. Which puts HFRO’s at the whims of individual investors who, after a 10-month bear market, are skittish to say the least.

I love what Jim is doing at HFRO. Years ago, he realized that meaningful income in public investments was tough to come by So, he pivoted his approach to focus on private firms.

Basic investors don’t know HFRO. It’s arguably the cheapest CEF on the planet. Its unheard-of 28% discount to NAV means shares sell for a giveaway 72 cents on the dollar.

I get it, nobody has heard of Creek Pine. And granted CEFs like HFRO typically do not venture into private investments. But it’s a savvy strategy practiced by a master.

The big shops like BlackRock and Eaton Vance get the best private credit deals, apply some leverage, and kick out a big dividend. Small fry like HFRO must fight over credit scraps.

HFRO’s private company investment edge is paying (big) dividends. Since January 2020, HFRO’s NAV gained by 6%. Meanwhile, the fund has dished its generous dividend every single month. (Dividends are cashed out from NAV, so this payout is well funded.)

HFRO has rewarded my Dividend Swing Trader readers with 13% total returns since our purchase. But the fund is still dirt cheap thanks to its higher NAV and the fact that vanilla investors (and “first-level” money managers) don’t understand it.

Over the next few months, HFRO could easily return another 13% thanks to its:

Last year, I scored an exclusive 51-minute interview with an HFRO executive. At the time, the fund was attempting to convert itself to a holding fund.

Management eventually decided against the conversion, but to opposition from investors who were in love with HFRO’s dividend and wanted the fund to keep on trucking, paying them monthly.

Well, here we are one year after the finale of that financial drama: HFRO still pays its monthly dividend, still grows NAV, and still trades for just 72 cents on the dollar!

Will the fund ever get respect? Who knows and, for our selfish dividend motivations, who cares? We’ll keep collecting the 8.8%—every month—while this fund’s price grinds higher.

Publisher’s Note: We’ve uncovered 4 CEFs that deliver something all of us are after these days: rich 9.5% dividends and big discounts, too!

In fact, like HFRO, these 4 funds’ discounts are so big we’re projecting 20%+ in price upside from each of them, to go along with their huge 9.5% payouts. (And that’s just the average: the highest payer of the bunch yields 10.4%!)

That’s the power of the smaller CEFs Brett’s colleague Michael Foster, the strategist behind our CEF Insider service, follows religiously.  If you’re looking to protect your income stream from inflation, deflation and everything in between, Michael’s CEF picks may be exactly what you need.

Click here to get our FREE report revealing everything you need to know about these 4 bargain-priced 9.5%-yielding CEFs… along with a special chance to take CEF Insider for a no-risk test drive for 60 days.