If you invest in closed-end funds (CEFs), you’re already miles ahead of most folks. (And if you don’t, there’s never been a better time to try them—I’ll show you a tech-focused CEF whose payout triples the dividend on “regular” stocks in a moment.)

The main reason why most investors miss out on CEFs (which offer tantalizing yields of 7.3%, on average, as I write this), is that the CEF market is small, with only around 500 CEFs out there in total. Compare that to ETFs, which numbered around 7,600 last year.

In fact, last year, ETFs hit a big milestone: they attracted a trillion dollars in a single calendar year. And they did that before the start of December! 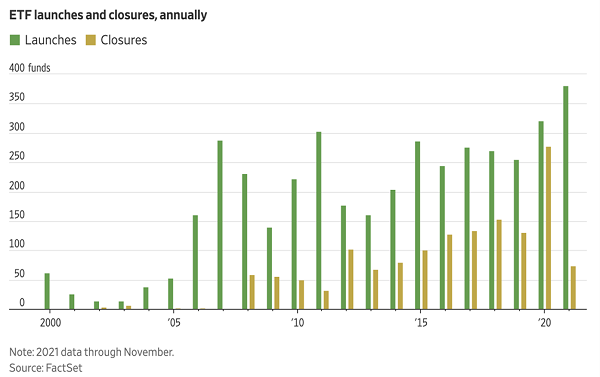 Why are ETFs so popular in comparison to CEFs? The answer is more complicated than you’d expect, and it depends not just on whom you ask but when. Here’s what I mean by that: in the early 2010s when ETF launches surged tenfold, their biggest appeal could be summarized in a simple phrase: passive investing at lower fees.

Passive ETFs: The Trend of the ’10s 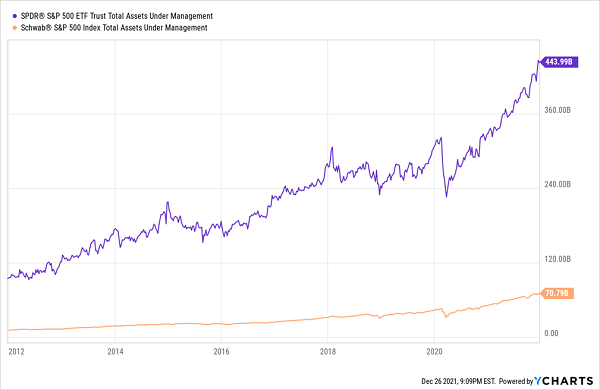 The chart above shows the popularity of lower fees in a pretty clear way, with the total assets of the SPDR S&P 500 ETF Trust (SPY), in purple above, compared to the Schwab S&P 500 Index Fund (SWPPX), one of the biggest passive mutual funds out there, in orange. Not that this was because of outperformance, mind you, as the mutual fund actually modestly outperformed SPY in the last decade:

“Trendy” ETF Fails to Stand Out 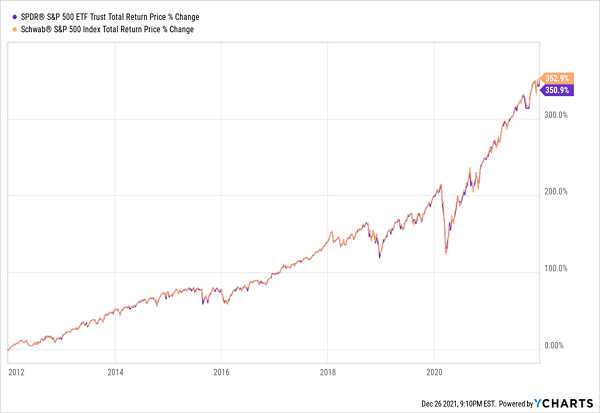 Nowadays, the argument for ETFs has evolved with the emergence of the actively managed offerings. The most famous example is the Ark Innovation ETF (ARKK), a tech-focused ETF led by its media-savvy CEO, Cathie Wood. 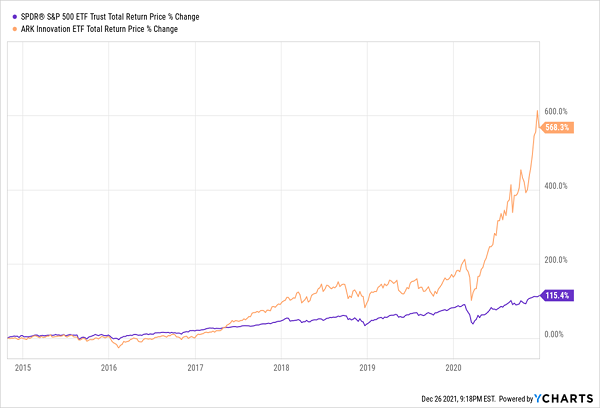 With a shocking 568% return from inception in 2014 to the start of 2021, ARKK looked like a miracle. But this hot streak has run cold lately. 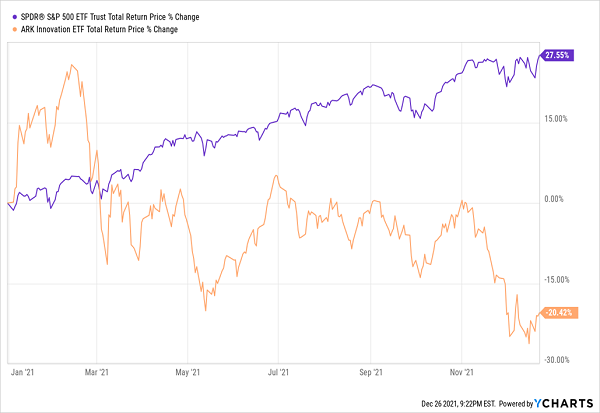 As a result, investor interest in active ETFs has cooled off, with the third act of ETF investing coming to a close as we embark on 2022.

This is where CEFs come in, because even though they charge higher fees than active or passive ETFs, they more than make up for those fees with their high dividends (as I said, 7.3% payouts are the average here) and outperformance, with a growing number of CEFs (currently over 200!) beating their indexes lately. It’s hard to imagine that these strengths won’t pull in a lot more investors in the future. 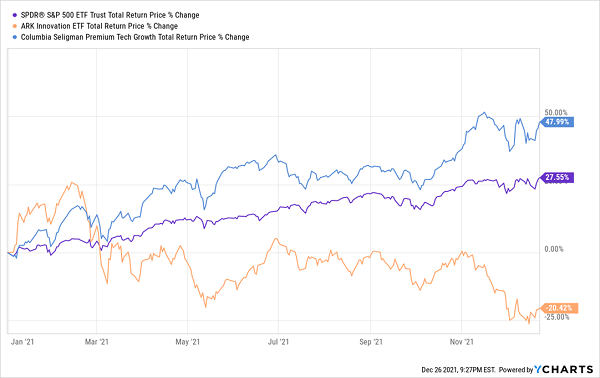 With strong outperformance compared to the index and ARKK, STK is the clear winner for 2021. And while its 3.8% dividend is pretty small by CEF standards, it’s still pretty compelling compared to most of the ETF competition and to your typical S&P 500 stock, which yields a miserly 1.2% today.

The best news: we can do even better than STK with the 4 CEFs I’m urgently recommending now, which boast a monster 7.5% yield, on average, between them.

Plus, unlike STK, which trades at a 4% premium to its net asset value (NAV, or the value of the stocks in its portfolio), these funds are bargains now—so much so that I’m expecting 20%+ price upside from each of them by the time 2022 is out. And that’s in addition to your 7.5% payout!

Don’t miss your chance to buy these income machines before they start their next run higher. Click here and I’ll give you everything I have on them, including their names, tickers, dividend yields and a complete breakdown of their portfolios.