One week ago, money-printer-turned-inflation-hawk Jay Powell told the world he was going to keep hiking interest rates. And more than he thought his Federal Reserve needed just two months ago.

It depends. Let’s explore the second level take, because Jay’s outlook is actually bullish for a select slice of fixed income.

Our inspiration, as always, is renowned value investor Howard Marks, chief of Oaktree Capital Group, with $164 billion under management. Marks’ writing has won acclaim from legendary peers such as Joel Greenblatt, Jeremy Grantham, Seth Klarman and even Warren Buffett.

In his book The Most Important Thing: Uncommon Sense for the Thoughtful Investor, Marks introduces his concept of “second-level thinking” with a few examples:

Let’s apply this exercise to Powell’s presser. The first-level folks came away thinking:

“Gee, Jay is serious about cleaning up inflation. He is going to hike rates higher than we thought. He may leave them there longer than we thought. This is all bad for bonds because bond prices tend to move opposite rates. Let’s sell our bonds now.”

It’s fair. But they missed one critical nuance that we second-level scholars gleaned:

A recession is the only way we’re going to tame inflation at this point. An inevitable economic slump is coming. When it hits, investors will flock to the safest bonds on the planet. They always do.

It doesn’t happen often, but it is possible for short rates and long rates to march to different beats. This is happening now.

The “short end” (maturities closer to today) of the yield curve is grinding higher because the Fed head has said he has more work to do. Over time, the 2-year Treasury tends to lead the Fed Funds Rate because it anticipates the Fed’s next move.

The “long end” (maturities farther away) of the yield curve, meanwhile, is catching its breath while it weighs the lesser of two evils: inflation today or a recession tomorrow.

However, the 10-year hasn’t paid 4%+ in 14 years. With stocks looking dicey, the 4-handle coupon is bringing in some whale buyers, such as our man the “bond god” Jeffrey Gundlach.

Four percent has been a lid on long bond yields for the past 14 years. We thoughtful investors play the numbers. The “4% ceiling” is a logical place for the long rate to take a breather: 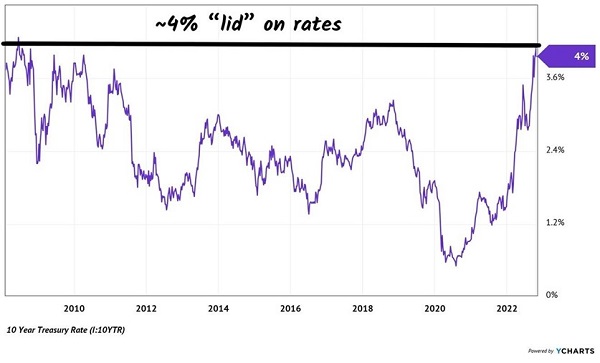 But with a recession on the way, the 4% cap is likely to hold for now. Safe bonds like Treasuries will be promoted from the 2022 outhouse to the 2023 penthouse.

For the first time in 14 years, a fund like iShares 20+ Year Treasury Bond ETF (TLT) pays. It boasts a 4.2% yield and has some serious upside potential. As we slide into a recession, TLT will be one of the few tickers climbing. 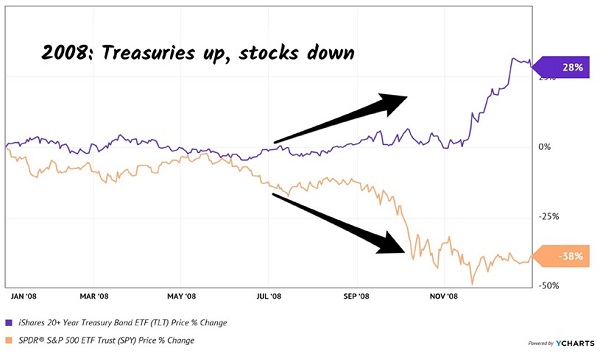 If you’re worried about a recession in 2023, TLT may be the play. As always, look past the headlines—and consider the second-level strategy.

Oh, and TLT pays its dividends monthly. Which is ideal.

I don’t know about you, but my subscriptions and bills charge my bank account monthly as well. I prefer to get paid before these debits hit!

My only knock on TLT? A 4.2% yield isn’t 8%. But that’s OK, because there are other safe bond funds that do pay 8%+ dividends, split into 12 monthly payments.

These are ideal for retirees because we can collect $3,300+ in dividends per month—every month—and earn $50,000 or more annually in capital gains to boot. Please stick with me another minute or two and I’ll explain how to retire on 8%+ dividends that are paid monthly.