Healthcare—along with consumer staples (“buying stuff”) and utilities (“keeping the lights on”)—provide portfolio stability. Plus, they usually pay dividends, too!

Of the three safety sectors, healthcare is a steady growth market, too. Consider these stats from the Centers for Medicare & Medicaid Services:

This isn’t new. We all feel that growing pinch year after year. But like it or loathe it, that pain in our pockets has translated into big profits for the healthcare sector, which has not only performed exceedingly well over the long term, but has kept volatility down for shareholders, too. 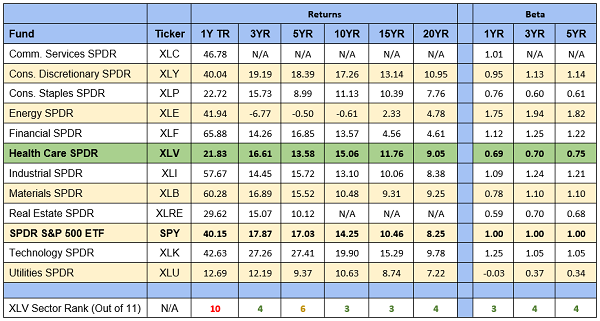 Better still, healthcare is responsible for some of the most reliable dividends on the planet, with several sector names boasting Dividend Aristocracy, but it’s also not difficult to find fat yielders too, throwing off payouts north of 5%.

Here, we’ll examine five healthcare names that should keep your income portfolio in peak condition for years to come:

AbbVie (ABBV) was famously spun off from Abbott Laboratories (ABT) at the start of 2013. The original Dividend Aristocrat maintained its lines of med-tech devices and other healthcare products, while the latter would hold biopharmaceutical products such as Humira, AndroGel and Tricor.

And keeping in line with the pharmaceutical industry, ABBV has offered the superior dividend ever since parting with ABT. 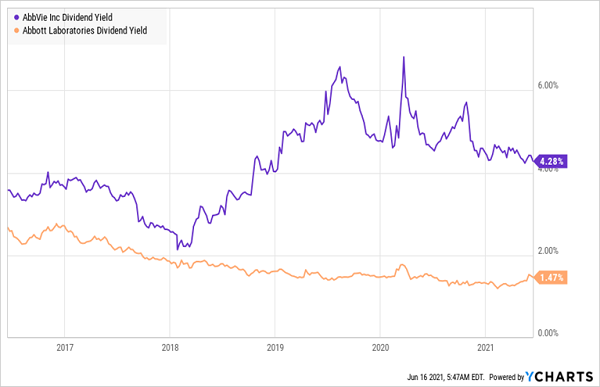 You can’t discuss AbbVie without discussing Humira—its blockbuster drug that treats Crohn’s disease, rheumatoid arthritis, psoriasis and other diseases, and that brings in more than a third of total revenues.

What’s worth talking about nowadays, however, is that the slice of revenues it generates is thinning. During the final quarter of 2019, Humira sales made up nearly 60% of the total pie. But patent expirations, as they do, are eating into its areas of opportunity not just in the U.S., but overseas.

Fortunately, AbbVie is offsetting that with immunology treatments Skyrizi and Rinvoq, as well as oncology treatments such as Imbruvica and Venclexta. It’s also trying to grow through acquisitions; last year, it completed a $63 billion buyout of Botox maker Allergan.

Meanwhile, the dividend, in normal years, is backed by roughly twice the cash flow necessary to cover it. That makes ABBV one of the few traditional 4%+ yielding blue chips you don’t need to lose sleep over.

While many healthcare stocks provide better dividends than the market average, to get truly substantial income, you need to veer into the real estate space.

National Health Investors (NHI) is a real estate investment trust (REIT) that manages 242 properties across 34 states—primarily senior housing and skilled nursing facilities, with a sprinkling of medical office buildings and other healthcare properties.

Senior care once seemed like a can’t-miss business. The aging of the Baby Boomers was sure to eventually pack these facilities, leading to literally decades of higher cash flows. NHI seemed to be reflecting that track, with dividends growing every year since 2001.

But things have changed.

Several of NHI’s tenants are feeling the stress of the COVID downturn, which has shaken the general thesis around senior-care facilities. Recently, National Health Investors made a lease-deferral agreement with independent living facility operator Holiday Retirement, forcing the pros to downgrade their estimates for FFO (funds from operations, which are a vital measure of a REIT’s profitability).

More immediately, the Holiday deferment, as well as uncertainty among other tenants, forced NHI to cut its quarterly payout by 18.4% to 90 cents per share. While the yield is still more than 5% regardless, investors should avoid this particular REIT until the smoke clears.

As the Dividend Goes, So Goes NHI Shares 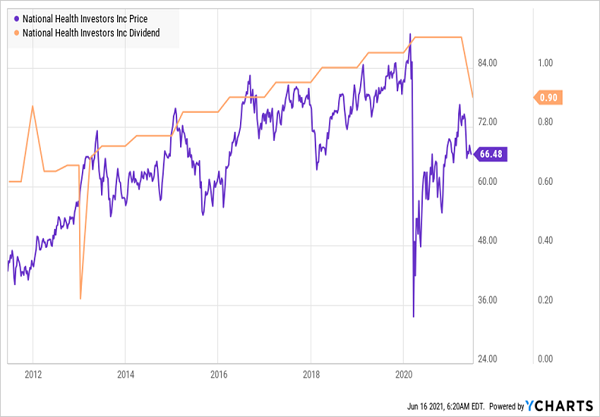 Sabra boasts 426 properties nationwide, two-thirds of which are skilled nursing and transitional care. Another 25% is either leased or managed senior housing facilities, and the remainder are spread amongst specialty hospitals and other healthcare buildings.

Like many other firms that cut their payouts in 2020, Sabra announced its dividend cut in the spring, long before the actual damage from COVID was known. SBRA announced in March 2020 that it would pull back its payout by 33% to 30 cents per share—a move expected to save the firm $30 million in cash quarterly.

“It is impossible to predict the ultimate impact on our operators. We believe that reducing the quarterly dividend is an appropriate response to enhance the company’s management of this pandemic,” CEO Rick Matros said at the time. 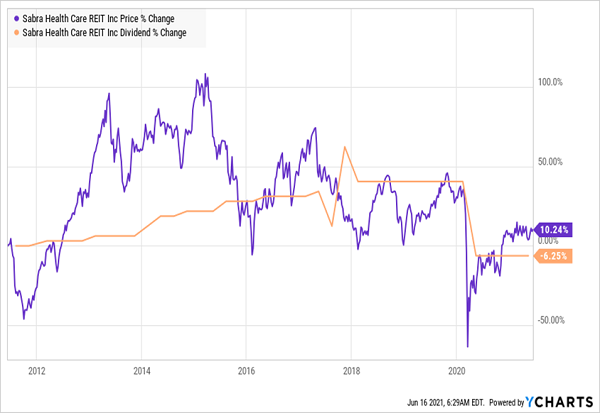 Sabra is far from pretty right now, and shares still haven’t recovered to pre-pandemic levels. However, its early dividend cut did, in fact, help pad the balance sheet, putting the REIT on firmer ground as its tenants’ operations recover. In fact, you could argue that this nearly 7% yield is going on the cheap, with SBRA trading at a hair less than 11 times 2021 estimates for FFO.

Lest you think every healthcare REIT is cutting dividends, let’s take a look at Global Medical REIT (GMRE), which improved its payout earlier this year.

The “Global Medical” moniker is a bit of a tease, as this healthcare REIT is entirely U.S.-centric. GMRE leases out 145 buildings to 117 tenants across 29 states, with an occupancy rate slightly above 99%. More than 60% of the firm’s properties are medical office buildings, inpatient rehab facilities make up another 20%, 7% are surgical hospitals and the remainder is scattered among other types of healthcare buildings.

GMRE has been a serial acquirer since its 2016 initial public offering, with the portfolio growing by 74% annually to its current $1.1 billion in gross investments. But it also grows its profits organically, building in annual rent escalations of roughly 2% on average.

Global Medical REIT experienced a smaller COVID slide than many in its industry due to its particular building mix, and it has rebounded more quickly. Indeed, the company’s financial situation allowed it to finally improve its payout for the first time since its IPO, albeit by a mere 2.5% to 20.5 cents per share.

The Start of a More Generous GMRE? 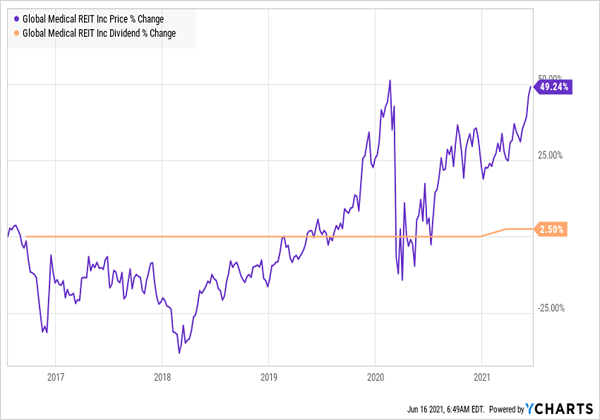 What I like more is the fact that GMRE managed to reduce its leverage at the same time, paying off debt with most of the proceeds of a public share offering in Q1. Existing shareholders might not have liked the dilution, but buyers clearly aren’t being deterred.

We can get juicy monthly dividends out of healthcare too, if we know where to look.

LTC Properties (LTC) is a senior housing and healthcare REIT that invests in such properties through mortgage financing, sale-leaseback and other methods. It currently boasts 177 investments across 30 partners in 27 states.

LTC’s tenant mix is roughly 50-50 senior housing and skilled nursing, putting it smack-dab in the eye of the COVID storm. Last March, the company was forced to nix a share buyback plan it had announced just a couple of weeks earlier (though it managed to maintain its monthly dividend), and the bear-market turn pulled LTC shares by as much as 40% lower at the depths. 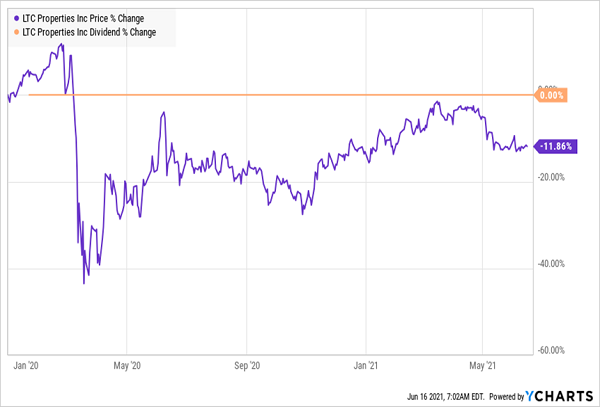 Like with NHI, LTC continues to feel COVID’s effects. The company’s most recent quarterly results missed the mark (64 cents per share of FFO versus expectations for 68 cents) thanks to a nonpayment by tenant Senior Lifestyle Corporation (SLC), as well as lowered rent escalations to troubled operators. In fact, SLC hasn’t paid rent for seven months, and NHI has recently transitioned nearly a dozen SLC properties to other senior living operators.

The “A” Squad: Monthly Payers Doling Out 7% Yields

The yield is nice, at nearly 6%, and it’s especially nice to have that cash paid out monthly. But LTC’s future still looks hazy, and a valuation of 15 times FFO estimates is hardly enticing enough.

If you’re looking for a long-term income solution that will pay you each and every month, you can do better—in fact, right now, you can get roughly 7% on average on investments that are swimming with the current, not against it.

My “7% Monthly Payer Portfolio” is an elite set of high-income, high-frequency dividend payers that, at current prices, are smack-dab in the middle of our ideal “buy zone.” And as the name suggests, these 7% dividends are paid out to investors each and every month.

Many of the picks in my “7% Monthly Payer Portfolio” leverage the power of steady-Eddie holdings to generate not just massive yields, but shockingly aggressive price performance. That allows us to do the unthinkable from an income strategy: double our money much more quickly than traditional blue-chips-and-mutual-funds portfolios.

They’re not just great, either.

If you drop $500K—less than half what most financial gurus suggest you need to retire—into this powerful portfolio now, you’d kick-start a $36,000 annual income stream. That’s more than $3,000 a month in regular income checks!

The time to get in is now, while you can still buy these names at bargain prices. Click here to get everything you need—names, tickers, complete dividend histories and more—instantly!