Time to Buy the Bottom in These 8%+ Yields?

As contrarian income seekers we buy when yields are high and prices are low. Today, we’re going to explore a three-pack of dividend funds that pays 8.5%.

This is “retire in style” income. We put a million dollars in these plays and get paid $85,000 per year. Plus, we keep our principal intact.

And wait, there’s more. The cheapest of these three funds is currently trading for just 89 cents on the dollar. Yes, that’s an 11% discount to the value of its underlying holdings.

Too good to be true? Or bottom-fishing bargain? Let’s explore my preferred dividend strategy and these three dividend machines.

My Preferred Asset for Retirement Investing

The high-yield haven in question is called “preferred stock”—a lesser-seen type of stock that some companies will issue when they want to raise money but, for whatever reason, don’t want to issue more traditional stock nor bonds.

Which is interesting, because preferreds share characteristics of both.

On the one hand, preferreds trade on an exchange and represent equity in the issuing company, just like common stock.

But rather than trading violently up and down, preferreds usually trade around a par value, deliver a fixed amount of income, and typically don’t include voting rights, just like bonds.

But what I love about preferreds are their unique perks:

For instance, Citigroup (C) yields a decently high 4.5%, but its Series J Preferreds yield well more than that, at 6.9%. More striking is conglomerate Danaher (DHR), whose commons yield a paltry 0.4% while its Series B Preferreds dole out a respectable 3.6%.

So, if preferreds are so great, why are they eating asphalt?

Because preferreds are so bond-like—namely, their returns are all about yields—they historically have been a lot more stable than common stock. But that very same characteristic has allowed them to fall victim to an aggressive Federal Reserve, with persistent rate hikes sending bonds and preferreds alike to the mat.

But eventually, rates will top out. We are heading into the most telegraphed recession in American history. As the economy slows down, money will come back to the bond market.

And preferred-stock closed-end funds (CEFs) in particular will soar. They trade like bonds but better—when the rate winds are at our backs, these CEFs can really soar.

Today the three we are going to discuss all yield 8% or more. All three are trading for well below their net asset value (NAV), which means we’re buying these big dividends for as little as 89 cents on the dollar.

We’ll start with one of the freshest-faced CEFs on the market: The Nuveen Variable Rate Preferred & Income Fund (NPFD), which came to life less than a year ago on Dec. 15, 2021.

Thus, the 9.3% discount as I write vs. its “historical” discount of 8.2% doesn’t mean as much—but it’s still a nearly 10% discount on preferred assets and an 8%-plus yield, so it’s worth exploring.

NPFD primarily invests in companies’ variable-rate preferred securities (and other variable-rate income-producing securities). As should be no surprise, those companies are predominantly financial-sector firms: the top four industries by exposure are diversified banks (28%), insurance (14%), regional banks (14%) and capital markets (12%). No. 5, for contrast, is oil, gas and consumable fuels at a steep dropoff of 5%.

Credit quality is quite high, too, with more than two-thirds of the fund’s assets allocated to investment-grade preferreds; another 27% are in the highest junk level (BB), leaving only about 4% in B- and unrated securities. But despite this high quality, NPFD manages a juicy yield of more than 8% by going all-in on leverage—38% as of the most recent data.

So, why variable-rate preferreds?

Well, much like floating-rate loans help reduce interest-rate risk for business development companies (BDCs), variable-rate preferreds help reduce interest-rate risk—in other words, these preferreds shouldn’t decline as much as their fixed-rate brethren while the Fed keeps the pedal down on rate hikes. For example, look at the Global X Variable Rate Preferred ETF’s (PFFV) performance this year versus the iShares Preferred and Income Securities ETF (PFF), which serves as the de facto benchmark for preferreds:

Variable-Rate Exposure Has Done Its Job 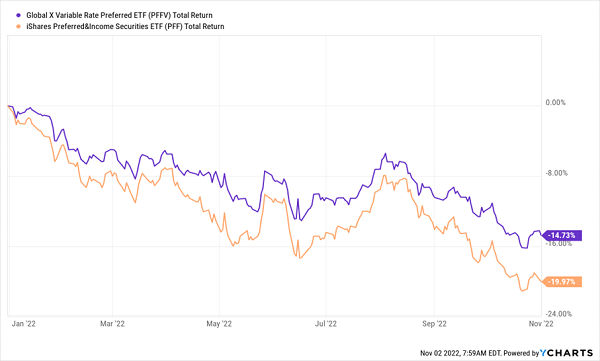 But while the variable nature of its holdings should reduce interest-rate risk, that’s countered by the very same leverage that gives NPFD its ample yield. As I’ve previously explained to my Contrarian Income Report readers, several CEFs (including preferred funds) are being hampered by higher borrowing costs thanks to rising short-term rates.

So Much for Risk Reduction 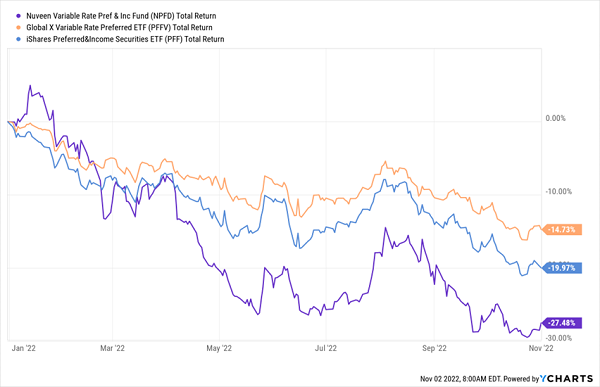 Indeed, not only has NPFD underperformed PFF and PFFV, but it’s also lagging the two other CEFs I’m about to show you. Early days for NPFD, but other than the yield, I’m not seeing anything worth getting excited about.

Cohen & Steers Limited Duration Preferred and Income Fund (LDP) is uncommon in that, as the name suggests, it’s a “limited-duration” fund.

Many preferreds are perpetual in nature, meaning they have no real duration—but limited-duration funds home in on those preferreds that do have tangible endpoints (again, in theory, helping cut down on interest-rate risk). Your typical duration fund will have a duration of six years or less; at the moment, LDP’s duration is a hair under three years.

Credit risk, meanwhile, is pretty much par for the course. Roughly half of the portfolio is invested in investment-grade preferreds, and another third or so is in BB-rated issues—a hair better overall than PFF’s portfolio quality.

Despite these limited-duration holdings, LDP has a much higher yield than PFF, which it can chalk up to nearly 35% in debt leverage—which again, is not particularly helpful when rates are rising and preferreds are dropping.

LDP’s Benefits Have Been Limited During This Downturn 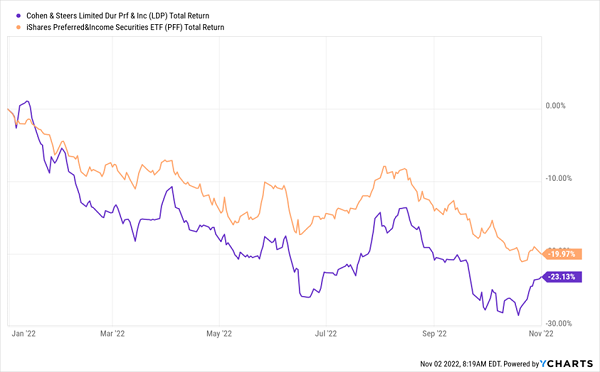 But longer-term, that leverage has worked in LDP’s favor.

A Wilder Ride, But Better Results 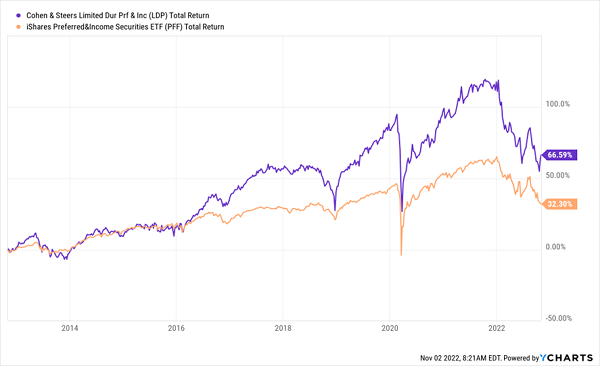 So while LDP has been down on its luck of late, a 6.3% discount versus a five-year average discount of just 2.4% might be signaling an attractive entry point.

The biggest yield of the bunch can be found in another young fund: the Cohen & Steers Tax-Advantaged Preferred Securities and Income Fund (PTA), a COVID-era launch from October 2020.

You can find the best performance of the bunch here, too.

PTA Is Holding Its Own 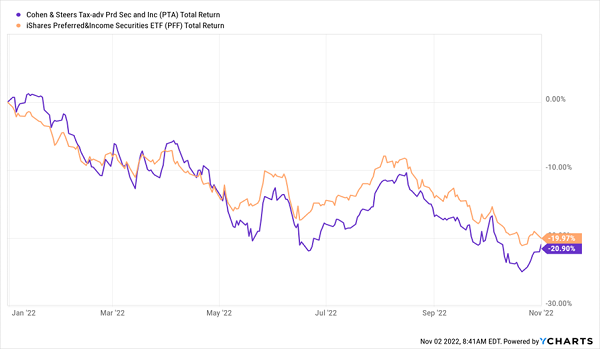 If you’re reading the term “tax-advantaged” in the name and are thinking “municipal preferreds?”, I completely understand. “Tax-advantaged” is a very common fund nomenclature for municipal bonds.

But that’s not the case here. What PTA is trying to do, per the prospectus, is “achieve favorable after-tax returns for its shareholders by seeking to minimize the U.S. federal income tax consequences on income generated by the Fund.”

And the fund has two ways of doing that:

The result isn’t some wildly divergent portfolio, however; it’s pretty standard. Banking makes up 51% of assets, followed by insurance (14%) and utilities (8%). Top holdings include preferreds from JPMorgan Chase (JPM), Charles Schwab (SCHW), and Bank of America (BAC). If there’s anything of particular note, it’s the geographic diversification. You could rightly call this a “global” fund, with just 63% of holdings from the U.S.; the U.K. (7%), France (6%) and Canada (5%) are among 15 other countries represented.

Like the other preferred funds here, PTA uses a high amount (38%) of leverage, which is certainly a weight. But nodding to the chart above, it’s actually about neck-and-neck with PFF, hinting at some solid portfolio choices by this Cohen & Steers management team. Also helping is that management does have the option of occasionally investing in stocks, government bonds, even munis to generate alpha.

Again, there’s not much track record here, but 2022 has been (relatively) encouraging. An 11.1% discount to NAV isn’t precipitously cheaper than PTA’s 8.8% average in its short trading history, but does represent a chance to snap up a nearly 9% yield while buying assets for 89 cents on the dollar.

The Ultimate Playbook for A Secure Retirement: 8%+ Yields, Delivered EVERY MONTH

I love preferreds because they satisfy several of the most basic retirement needs:

And most importantly, you need to know beyond a shadow of a doubt that a sizable dividend check is hitting your mailbox each and every month—no exceptions.

But that means if you’re going to invest in preferreds (or any other high-yield classes), you can’t settle for anything less than the “A” squad: diversified, reliable payers of mouth watering yet dependable income that don’t knuckle under every time the economy throws a fit.

Fortunately, you can find these rare monthly dividend blue chips in my “8% Monthly Payer Portfolio.”

Many of the recommendations in this portfolio” leverage the power of steady-Eddie holdings to generate massive yields, while also fostering the potential to generate aggressive price performance.

It’s simple math: Even if you have just a $500,000 nest egg—which is less than half of what most financial gurus suggest you need to retire—putting it to work in this powerful portfolio now could kick-start a $40,000 annual income stream.

Even better? The market’s recent antics have provided us with a rare gift, pulling all of these monthly dividend stocks back into our “buy zone,” where we can grab them at bargain prices. Click here for details on these generous monthly dividend payers right now!