Your One-Time Chance to Get a 12.4% Dividend From Apple

There’s no doubt portfolios everywhere are whipsawing due to the selloff.

But I’ve got good news for you: going by the historical record, this pullback will likely be shorter than most people think, and if you buy now—particularly if you target a select group of high-yield stocks and closed-end funds (CEFs)—you’ll outperform your fearful friends when the bounce-back comes.

Meantime, you’ll open up a nice new income stream to meet your cash-flow needs today. It literally is the best of both worlds!

Let’s dive into what the facts say about this bear market’s duration. Then I’ll name two funds worthy of your attention now. They yield 10.4% and 12.1%, and because they hold some of the top names in the S&P 500—like Apple (AAPL), Microsoft (MSFT) and others—they’re perfectly positioned to lead the way when the recovery kicks in (as it inevitably will).

History’s Lesson: Now Is the Time to Buy

I get it: emotionally, it is hard to buy when the entire world seems to be selling. But history tells us that this is the right thing to do. Look at the table below: it’s clear that in the 16 bear markets since 1929, it’s typically taken a very short time to get back to black. 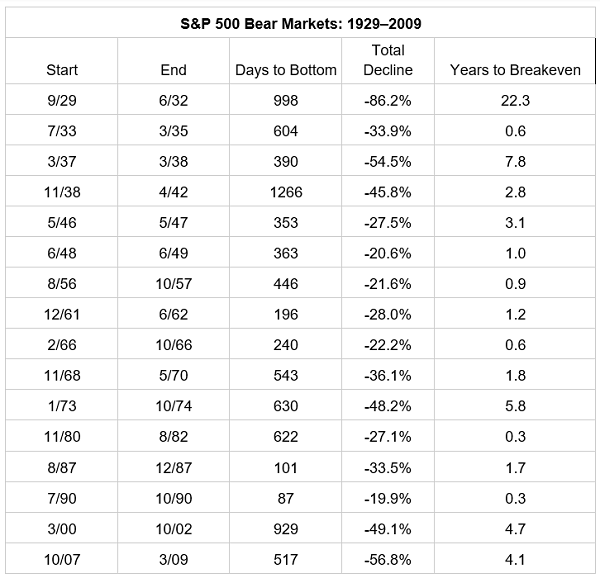 More importantly, the time it took the market to recover has been short in most cases. While it took a generation for stocks to get back to pre–Great Depression levels, this has a lot to do with how poorly that crisis was managed, as well as the devastation of World War II. Only when America was fully rebuilding in the 1950s did stocks get back to where they were.

That’s very unusual. Throughout the ’60s and to today, recoveries have tended to take a year or less, with the exceptions being the early ’70s Nixon shock and the more recent 2000s busts. Each of those was different in important ways, but they all had one thing in common: unsustainable bubbles.

In the early 1970s, a massive increase in public debt combined with US-dollar inflation resulted in the collapse of the stock market and US economy at the same time. Since inflation was averaging 6.7% back then, the growth in debt made it necessary to devalue the dollar, hitting the stock market hard. In short, the dollar itself had been in a bubble, and it needed to deflate.

In 2000 the bubble was different: dot-com stocks. But a massive overvaluation in equities at the time meant the market needed to reset. Similarly, the housing bubble of the 2000s was at the heart of the 2007–09 crash.

The lesson is clear: when a market crash is caused by a bubble, the recovery will take longer. But in periods like now, where the pullback is caused by a sudden shock from outside, recoveries tend to be much faster.

But that isn’t the only reason to stay in the market (and go on the hunt for income, as we’ll get to shortly). For another important cue, let’s look back to 2008/09. While it’s true that investors who bought the SPDR S&P 500 ETF (SPY) at the top of the 2008 housing bubble had to wait over four years to break even, it’s also true that investors who bought at the bottom of the market did much better.

From Crisis to Crisis 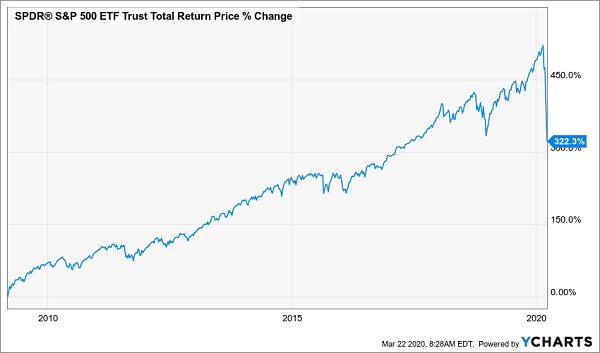 Investors who went against the terrified masses ended up with a whopping 14% annualized return over the next 12 years, including the coronavirus selloff!

Of course, market bottoms are only visible in hindsight, and we might not be at the bottom of this pullback quite yet. But don’t let that worry you: investors who bought three months early back in’08 still got a very respectable 10.9% annualized return from then to now. 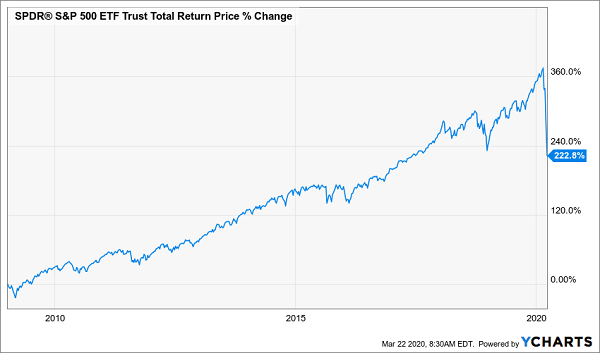 The bottom line: history tells us now is the time to buy. And those who do not learn from history are doomed to miss out on big profits (and dividends).

Of course, buying SPY isn’t going to help much if you need income now, and with the economy slowing, that’s a serious concern for many investors. That’s why I recommend closed-end funds (CEFs).

Right now, investors who buy CEFs are getting a 12.1% average yield, which is the most CEFs have paid in the last 10 years. And there are many equity CEFs that hold stocks in the S&P 500 and also focus on low-volatility, low-risk strategies, like the Nuveen S&P 500 Dynamic Overwrite Fund (SPXX), which holds leading tech, financial and consumer stocks, like Apple, Visa (V), JPMorgan Chase (JPM) and Home Depot (HD). SPXX yields 10.4% now.

Massive income streams like these can help you stay fully invested through the bear market while also getting the cash you need to make your way through this uncertain time. And thanks to their top-quality holdings, these funds are set to outperform in the coming rebound.

SPXX and ETJ are both solid picks now, but to really make sure we outperform in the rebound, we want to grab funds trading at even deeper discounts than these two.

Because as I write this, SPXX’s stock trades at a 7% discount to net asset value (NAV, or the per-share value of its underlying portfolio). That sounds cheap, but the fund has actually been a lot cheaper in the last year, trading at a whopping 17% discount at one point.

The story is much the same with ETJ.

That’s why you’re best to put these two funds on your watch list and look to my 4 favorite CEFs for your BUY list now.

These ironclad dividends (which average 8.4% now, with one yielding a blockbuster 10.3%) trade at even bigger discounts due to the selloff. That gives us crucial downside protection if things get worse—and even bigger upside when the market (inevitably) takes off.

These are, hands down, my 4 favorite picks in the CEF space now, and I can’t wait to show them to you.

Don’t miss your chance to lock in these huge income streams, before these funds’ prices race away from us. Click here and I’ll give you full details on each of these 4 picks: names, tickers and my full analysis of each one (including a full breakdown of their dividend histories and safety).