Many first-level investors complain that CEOs should be reinvesting in their companies instead, but they’re doing fine on that front, too: Goldman sees R&D spending rising 5% next year, while capex will gain 6% (excluding the beaten-down energy sector).

“Buying the Buyback” Is a Winning Strategy

Under a buyback, a firm purchases its own shares and cancels them, cutting the number outstanding, which gooses earnings per share (EPS) and share prices.

It’s smart to focus on companies in the buyback habit: a recent study by O’Shaughnessy Asset Management found that firms executing what researchers called “high-conviction buybacks” (or taking 5% or more of their shares outstanding off the market in the preceding year) returned an average of 15.9% annually between 1987 and 2014. That’s nearly 42% more than an equally weighted benchmark of all large US stocks.

And if you want instant access to these winners, I have great news: there are exchange traded funds (ETFs) for that.

Buyback ETFs are relegated to the shadows of their dividend-focused cousins, my favorite of which I revealed a few days ago. And 2015 hasn’t been kind to them either, with most trailing the S&P 500 year-to-date. But O’Shaughnessy’s research shows companies that repurchase shares have a history of delivering for investors—which means now is a great time to buy.

Here are three buyback ETFs to consider. I’ve got one that’s a good buy now, one you should steer clear of and one more for your watch list.

The New Kid on the Block

What’s a buyback ratio, you ask? When the index is rebalanced on the last trading day of the quarter, S&P selects companies by dividing the amount of cash they spent on buybacks over the last four quarters by their market caps at the start of that period.

The result is an equally weighted index of 102 stocks. The fund’s top 10 holdings, which only make up 11.4% of its total portfolio, include NVIDIA Corp. (NVDA), Southwest Airlines Co. (LUV) and Sherwin-Williams Co. (SHW). SPYB’s expense ratio is also the lowest of the bunch, at 0.35%.

The downside: investors are getting what they pay for. SPYB has only been trading since February 5, and it boasts the worst record of our three funds in that time, down 4%, compared to a 2.7% gain for the S&P 500.

Another fund is the TrimTabs Float Shrink ETF (TTFS).

This is a buyback ETF with a twist: it’s actively managed, using a strategy that focuses on companies that not only buy back shares but also have rising free cash flow and aren’t adding to their debt loads. That keeps the fund from picking up companies funding buybacks with debt, which usually destroys shareholder value. 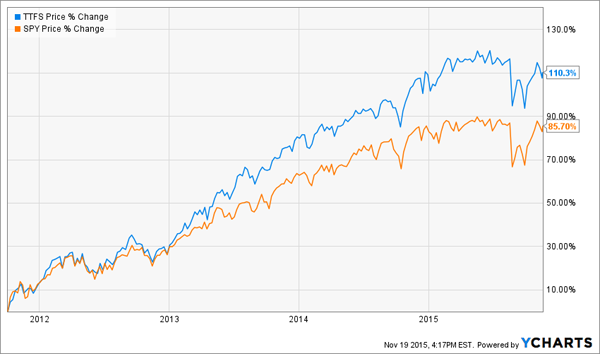 TTFS wouldn’t be a bad play—if I didn’t prefer our third option.

A Direct Route to “High-Conviction” Buybacks

If you want to beat a path straight to the “high-conviction” repurchasers O’Shaughnessy is talking about, look no further than my favorite buyback ETF, the PowerShares Buyback Achievers Portfolio (PKW).

The ETF tracks the NASDAQ US BuyBack Achievers Index, which includes precisely the kinds of stocks O’Shaughnessy cites: those that have cut their share counts by at least 5% in the trailing 12 months.

At 0.64%, the fund’s expense ratio comes right up the middle of our three picks. It’s also the dean of the buyback ETFs, and the one scribes refer to most when touting buybacks’ outperformance. Since its debut in December 2006, the fund has gained 91%, nearly doubling the S&P 500’s 47% rise.

PKW Nearly Doubles Up the S&P 500 Since Inception 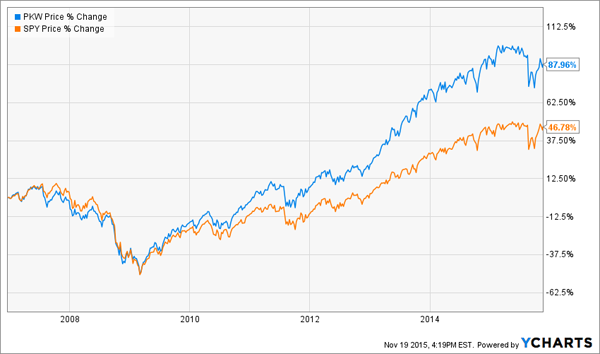 To top it off, its second-largest holding is my favorite defense stock for 2016, the Boeing Co. (BA), at 5.0% of the portfolio. Boeing is the poster child for shareholder friendliness, buying back over 10% of its shares since mid-2013 and more than doubling its dividend payout in the last three years.

As much as I like the Buyback Achievers ETF, I really prefer getting corporate cash handed directly to me in the form of dividends. That’s why I’m even more excited about a brand new company that’s boasting a 7.3% yield!

It’s a direct play on America’s aging population, and its amazing yield is not only safe but almost certain to grow strongly in the years ahead. Plus I expect a 10% pop in the share price soon as more investors discover this recent spin off (which just received new coverage from Goldman Sachs).

Get full details on this “perfect income investment” right now AND discover how my second-level analysis uncovered it.