Let’s say, for example, you bailed out of Northrop Grumman Corp. (NOC) on December 1, 2012, at the height of the fiscal cliff debate. You’d have missed out on 183% stock-price gains, along with dividend hikes averaging 15.2% a year.

It’s no surprise, then, that while the politicians were hammering out a deal that shaved $5 billion from the defense budget last month, top military suppliers were rolling out earnings reports that blew away the Street’s expectations.

Boeing: Strong Growth on the Cheap

Despite the stunning gains LMT and NOC have posted in the last three years, I don’t recommend buying them now. That’s because their performance hasn’t gone unnoticed by everyday investors—and they’ve bid the shares up to their highest valuations in years.

Take Northrop. Back in December 2012, you could have picked it up for just 7 times free cash flow (FCF). Today, you’ll pay 26 times FCF… nearly four times what you’d have paid in late 2012!

But there’s one stock that’s still flying under the radar. That’s the Boeing Company (BA), which trades at less than 12 times FCF, right around where it was three years ago.

Boeing put up one of the sector’s strongest performances this earnings season, posting adjusted third-quarter profits that soared 18% from a year ago, to $2.52 a share, well above the $2.22 the Street was expecting. Revenue rose 9%, to $25.9 billion, also topping the consensus forecast of $24.7 billion.

Even better, Boeing gives you an extra line of defense from Washington’s hijinks.

I’m talking about its commercial aircraft business, which supplied 68% of its third-quarter revenue. During the period, this division delivered a record 199 planes, up from 186 a year ago.

Boeing’s commercial division is catching a nice tailwind from two mammoth trends: airlines’ need to replace their aging fuel hogs and a growing appetite for travel in the developing world. And thanks to its 45% share of the commercial-aircraft market, the company is sitting in the catbird seat.

Between 2014 and 2034, Boeing expects global demand to hit 38,050 airliners, valued at more than $5.6 trillion. Sixty percent of these planes will go to fast-growing areas like the Asia-Pacific region, the Middle East, Latin America and Africa.

What’s more, 70% (or 26,730) will be single-aisle aircraft, and Boeing is going after that business in a big way with the 737 MAX, the latest iteration of its workhorse 737. The company has pulled out all the stops on the new model, making it 20% more fuel efficient than the current 737.

Airlines are taking notice: Boeing has received 2,900 orders so far and will deliver the first 737 MAX in late 2017. The company’s total backlog (including civilian and military sales) sits at $485 billion—or roughly five years worth of revenue.

Canada to the Rescue?

On cue, many first-level investors fretted last week when the Air Force tapped Northrop Grumman to build its Long-Range Strike Bomber, passing on a joint bid from Boeing and Lockheed. The contract’s value is pegged at around $80 billion. The loss was a big disappointment for Boeing, which just decided to protest the decision. The Government Accountability Office now has 100 days to review the case.

But military planes accounted for just 16% of Boeing’s revenue in the latest quarter, and this business isn’t going away anytime soon. In Q3, it won a $1.5-billion contract from the Navy for 13 P-8A maritime surveillance aircraft, plus an order from India for 22 Apache attack helicopters and 15 Chinook heavy-lift choppers.

The military side also goes well beyond the Pentagon, with 40% of its $59-billion backlog coming from outside the US.

That brings us to Boeing’s F/A-18 Super Hornet fighter, which could catch a lift from an unexpected place: Canada. Our northern neighbor’s new Liberal government has promised to scrap the previous administration’s plan to buy Lockheed’s expensive and much-delayed F-35 Joint Strike Fighter and look at other options instead.

Boeing could very well walk away with the sale: right now, the Canadian Air Force flies overhauled F-18s it bought back in the ’80s, so going with the F/A-18—a vastly improved version—would make sense. Canada had planned to buy 60 F-35s, and a similar-sized F/A-18 order would be a big win for Boeing.

Whether its stock starts moving now or later, you’ll be well compensated as you wait. Boeing pays a 2.5% dividend and has a strong history of boosting its payout. In fact, the company has more than doubled its payout in the last three years alone.

And its payout ratio is just 43% of earnings, comfortably below the 50% I insist on. Rising earnings should continue to drive dividend increases. 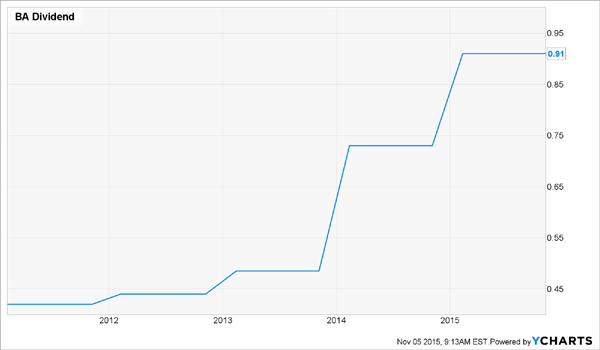 Boeing is also returning cash to shareholders in the form of share buy-backs. It’s taken more than 10% of its shares outstanding off the market since 2013. 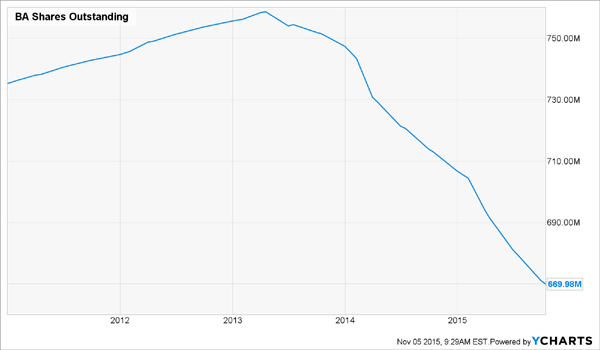 Year-to-date, Boeing has repurchased 1.5 million shares for a total of $6 billion—and it has another $6 billion remaining on its authorization.

The lower share count boosts Boeing’s earnings per share, helping lift the stock price and amplifying future dividend increases because it cuts the number of shares on which the company has to pay out.

My guess? Management will take advantage of the stock’s cheap valuation and keep the buyback streak going throughout 2016. Investors should buckle up for takeoff.

If you think Boeing’s 2.5% yield sounds good, you won’t believe the big dividend payer in healthcare I recently discovered. It boasts an eye-popping 7.3% yield, and unlike Boeing, it doesn’t have to worry about fickle generals at the Pentagon or the airline industry’s wild gyrations.

Instead, it can bank on a steady stream of cash from U.S. demographic shifts in the coming years. And with 8,000 Americans reaching retirement every day, the sky truly is the limit for its dividend payouts!

I’ve just released a free special report that gives you everything you need to know about this life-changing opportunity and shows you exactly how I found it.

Go right here to get the full story in your free report now.