Where did these big dividends come from? A lack of love from investors. Many older tech firms are transitioning into new products and segments. These concerns are weighing on these companies. So their stock prices languish while their earnings continue to grow – which they in turn shovel back to shareholders.

Investors are cashing in while they wait for these tech giants to figure out their next big thing. IBM is a perfect example of a firm in transition that pays big.

International Business Machines (IBM) is a company that is apparently adrift amidst its turnaround into even more strategic initiatives. Earnings have been predictably dragged down. It’s recorded 14 consecutive quarters of declining revenue – ouch.

These efforts are being mistaken for money pits, but IBM is quietly succeeding at transitioning from older businesses to newer (and higher growth) segments. Revenue increased 27% in IBM’s new strategic initiatives year-over-year this quarter.

IBM has a current price-to-earnings (P/E) ratio of just 9.7. It will pay a 3.7% dividend over the next twelve months. Big Blue hasn’t paid this much since Bill Clinton’s first term. 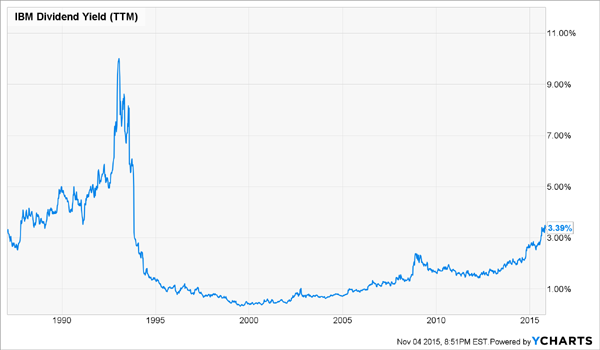 Some IBM projects have big potential – such as Watson, its artificial intelligence (AI) that can speak as a human and hold conversations. Remember IBM’s computers that embarrassed the chess Grandmasters? This is the next evolution of Deep Blue, as Watson’s “personality” could soon click as a doctor’s’ best friend.

The AI opportunity is just the beginning. If you can train a computer to compete on Jeopardy, you can make it helpful in any customer service industry.

Watson and the Health Cloud platform aren’t big businesses – yet. IBM earns the majority of its income as a technology services and consulting business. Which funds the 3.7% dividend while investors wait for the company’s next AI breakthrough.

IBM isn’t the only classic tech name that investors are ignoring while it innovates. They’re actually admonishing Apple for “only” doing a few new things.

Even after another record setting quarter, Apple is undervalued by the press and the market mainstream. The company sports a forward P/E of just 11.3 – one of the lowest in tech this side of IBM. And it’s trading at just 10-times free cash flow (FCF) – the actual cash it collects every year. 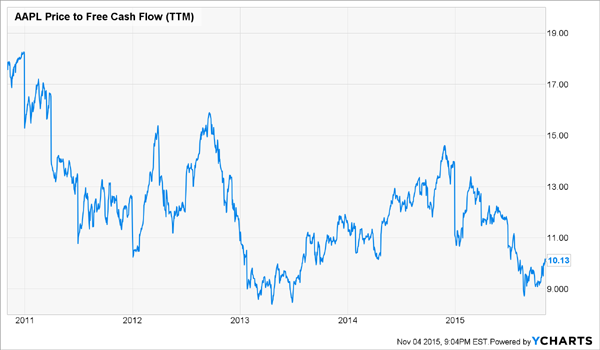 Apple’s $233.7 billion in annual sales would place it 45th in the world’s largest economies by GDP. It takes home $53.4 billion of annual income from those sales. That’s a staggering amount of annual earnings with no end in sight, thanks to the company’s devoted fan base.

Analysts have gotten themselves caught up on sales growth and new product segments. They somehow forgot that Apple earns tens of billions every quarter for shareholders.

As long as the iPhone continues to maintain and grow its devoted and “sticky” user base – even at a slower pace – Apple will deliver for investors.

Cisco Systems (CSCO) has also been punished for its seeming inability to morph into something else. But why does it need to? Networks, Internet Protocol (IP) and what we consider internet infrastructure have been the domain dominated by Cisco for a long time.

The company is the unquestioned leader in routing and switching systems (which direct internet traffic and information). The company’s control of this market – and it’s relative slower growth – has been the reason the stock has been in a virtual standstill for the last decade.

But that’s the past. Since Cisco started dishing dividends in 2011, the company has raised its payouts five times. The current quarterly dividend of $0.21 yields 2.9%. 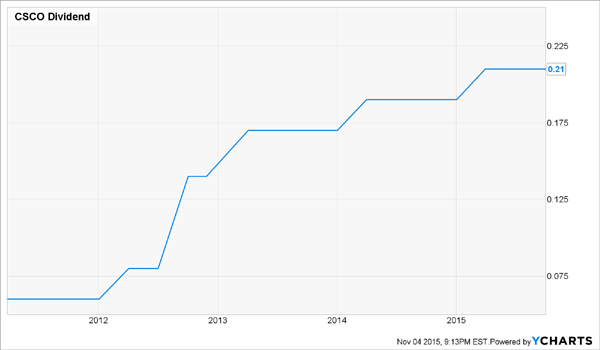 Moreover, Cisco has been adding to its offerings by aggressively getting into cybersecurity. As the internet of things (IoT) grows and more products add computerized internet access, the risks of hacking and undefended attacks grow.

Last week the company bought privately held cybersecurity firm Lancope. Adding cybersecurity to its offerings, in addition to making the internet a safer place, will serve this company and its investors well.

Microsoft (MSFT) is the poster child for the internet boom at the turn of the millennia. Since then, however, the ubiquitous software company has struggled to understand itself and its core offerings. As a result, they have created products in almost every segment imaginable to keep up with all trends.

Many of these have been failures. Like the Zune player released in 2006, which was designed to compete with the iPod, and subsequently discontinued in 2012.

But through its diversification the company kept its control on the software business and managed to add some wins in areas such as hardware and even gaming. Earnings grew. But today, the company is in transition again. 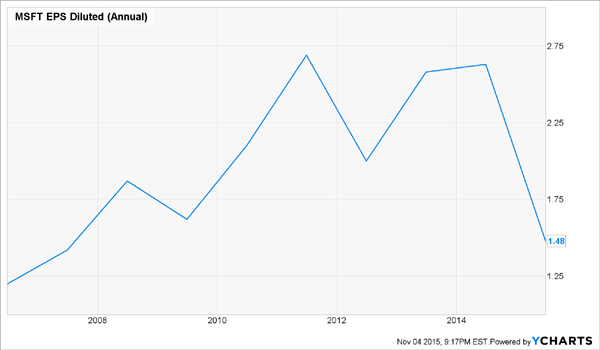 Last quarter, MSFT sold fewer smartphones and less software. But the silver lining was 8% growth in its cloud business. CEO Satya Nadella has been pushing the company into the cloud space and transitioning from its core software business.

Cloud software is a better business model because its subscription base. So the company collects more money – in fact, a lot more money – from its customers when compared traditional one-time software sales. But in the short term, there’s a hit to earnings as annual subscription prices are lower than one-time license fees.

To help investors’ patience, the company delivers a $1.44 dividend with a 2.7% yield. Microsoft has one of the highest current P/E ratios of the dividend-paying Big Tech group. But the firm’s forward P/E is just 17.4. And the company trades at 19-times FCF – which is not terribly pricey for a high-margin business like business software.

As attractive as these tech dividends are, none actually make the list of my favorite income picks right now. My top honor goes to a little-known stock boasting a 7.3% yield—almost twice what IBM is paying out!

I call it “the safest 7.3% you’ll find right now” because it’s quietly cashing in as the number of Americans 65+ skyrockets. No matter what the Fed or economy do, this business is going to keep rolling – thanks to unstoppable demographic trends.

I expect this hidden gem to eventually double its payout in the next several years. And I expect a 10% gain in the share price as more investors discover this new issue.

I’ll tell you all about this incredible opportunity—and the system I use to uncover more just like it—absolutely free right here.