And whether a collapse is imminent or not, you can be sure it’s only a matter of time – be it quarters, or years – because that’s just what credit markets do every so often. And there’s one firm uniquely positioned to profit from the next panic – Oaktree Capital (OAK), led by our favorite obscure billionaire Howard Marks.

The richest and smartest money manager that most individual investors have never heard of was actually in the news all last week. He issued his latest Oaktree Memo (read religiously by many superinvestors) and saw his firm featured in Barron’s as a stock set to profit when the debt cycle turns. 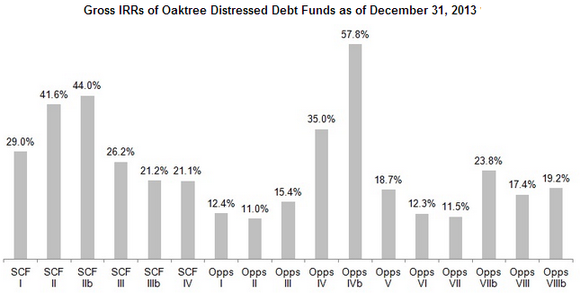 Barron’s likes the $22.6 billion that Oaktree raised over the last 12 months – most of which is being prepared for deployment. With the credit markets teetering, it should be the perfect time for Marks and his team to deploy this new money into distressed opportunities.

So should we, as Barron’s advises, purchase Oaktree shares to share in these upcoming gains and extra earnings? Ironically, if we employ Marks’ famous second-level analysis, the answer is a resounding: “Not yet.”

Marks outlines his favorite investing secret in an obscure chapter of his excellent book The Most Important Thing: Uncommon Sense for the Thoughtful Investor. It’s a work that won acclaim from legendary investors Joel Greenblatt, Jeremy Grantham, Seth Klarman, and even Warren Buffett.

In the chapter Marks introduces what he calls second-level thinking. It’s a more thoughtful and accurate analysis that considers already-prevalent opinions about a stock and company. For example, when analyzing corporate earnings, he explains:

When we apply Marks’ second-level thinking to Oaktree itself, we see that the company is setup for rising earnings and investment profits from a potential panic. However we can’t assume that, even if this comes to fruition that it will translate into a higher OAK stock price. Second-level analysis actually shows otherwise.

Oaktree Rhymes With Firms That Fall First as Credit Tightens

Oaktree the stock didn’t trade publicly until 2012, so we haven’t yet seen how the issue performs during a credit crisis. We know the company itself is likely to perform great – but stock performance can detach from firm performance, especially in the short term.

This is likely to be the case. Check out fellow “credit crisis darling” Blackstone Group (BX), which feasted on distressed issues in 2009. The stock subsequently climbed more than 1,000% in the years ahead, with profits from the financial wreckage of yesterday to thank:

Unfortunately investors who presciently bought Blackstone in May 2008 – just as the credit markets were starting to roll over – didn’t make a dime for nearly five years!

Oaktree Capital belongs on your watchlist. But don’t be lured by the stock’s 3.2% dividend on the notion that you’re “getting paid to wait” for the company to deploy its latest round of distressed capital. Heck, Blacktone paid out 9.8% over the last year in dividends while fellow special investment firms Apollo Global Management (APO) dished out 10.4% and KKR & Co (KKR) paid 8.6%.

Until the corporate bond markets blow up in earnest, it’s best to watch these issues from the sidelines. No matter what their current yields or headlines argue. My Contrarian Income Report readers and I will sit back for now, and step in after the dust settles.

The dust actually recently settled in another sector that I’m “pounding the table” to recommend right now. It’s got fantastic demographic trends that’ll keep powering ahead no matter what the credit markets do. My favorite company is as recession-proof as you can get AND it’s paying a 7% current yield right now.

Get the full details on this “perfect income investment” right now AND the details on how my second-level analysis uncovered it.