If you’re a regular reader, you know that I’ve been eyeing Real Estate Investment Trusts (REITs) lately. These are companies that can avoid income taxes by paying out most of their regular earnings to investors. They typically boast high payouts as a result – which has made them a popular option for income-starved investors.

REITs are getting crushed this year, and that’s created some excellent income opportunities. I recently highlighted three REITs that operate in the healthcare sector: Welltower (HCN), Ventas (VTR) and Healthcare Realty Trust (HR).

I like HCN and VTR on pullbacks, as I prefer to buy these issues when their yields are closer to 6%. That doesn’t happen often since these stocks are more commonly in favor than out.

We’re getting that pullback right now, thanks to the increasing likelihood of a Fed rate hike in December (futures traders are now giving it a 70% probability). That’s giving us yields of 5.9% and 5.6% on VTR and HCN respectively. VTR looks particularly attractive – its payout hasn’t been this high since 2009.

But should we be concerned that we’ll lose these yields in price depreciation as rates do rise?

Here are the problems that higher interest rates present… according to REIT bears today:

Rather than argue each point with a counterpoint, I turned to the final arbiter – the market itself – to show us what’s likely to actually unfold. And conveniently for us, a similar scenario played out a decade ago.

In June 2004, the original “easy money” Fed chair Alan Greenspan began boosting rates from then-historic lows. Over a two-year period, he increased the federal funds rate from 1% to 5.25%.

Heading into this time period, VTR was paying 5.8% – about the same as today. Meanwhile HCN was paying a juicy 7.3% and HR was not far behind at 6.8%.

Here’s how these three healthcare REITs fared (along with the Vanguard REIT Index ETF (VNQ) for a comparison with the entire sector): 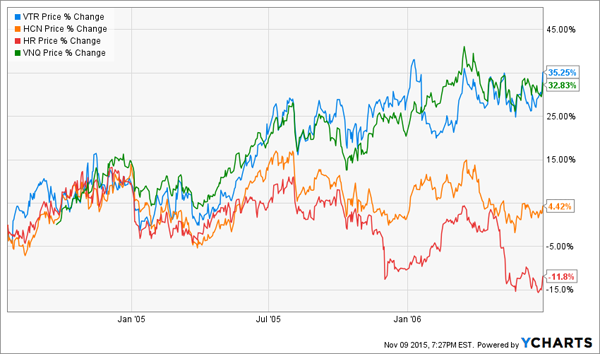 The sector itself (VNQ) did great. So did VTR. But HCN and HR lagged their healthcare counterpart. Why? Because they didn’t increase their dividends nearly as much as during this time span: 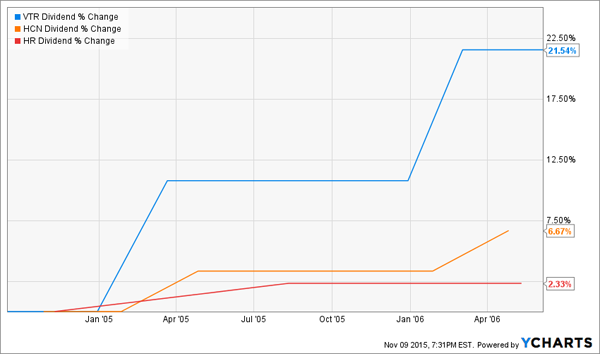 No matter the interest rate environment, income investors want to own stocks that are consistently increasing their dividends by meaningful amounts. I’m not talking about nominal 3-4% increases. I’m looking for gains that’ll double the payout in a decade or less.

That’s exactly what VTR has been able to do for the last 15 years. Its payout is 232% higher today than it was at the start of 2001. HCN has increased its dividend by 41% over the entire period (too slow). And HR’s payout has been slowly chopped in half over time.

The Dividend Drives These Stock Prices 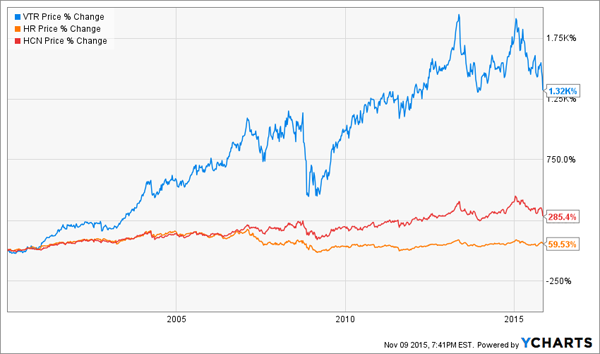 Regardless of Rates, Pick REITs That Grow Payouts

All REITs are on sale today. Those with the potential for dividend growth are tremendous bargains, as they’ve been thrown out with the rest of the sector’s bathwater. And as we saw in 2004-06, it’s likely that REITs as a whole will be just fine.

And the healthcare landlords are my favorite. They’re capitalizing off the biggest demographic shift in American history. Here’s what driving the America-is-getting-older trend:

The longer everyone lives, the more likely it is that they’ll need someone to help take care of them. About 70% of Americans who reach age 65 will need some form of long-term care and for an average of three years.

And while I do like VTR as a way to play this trend, I’m even more excited about a new company in its space that’s actually led by a group of former VTR executives. It’s a direct play on eldercare facilities. The firm pays an amazing 7.5% yield that’s not only safe, but likely to grow significantly with the market in the years ahead.

Get the full details on this “perfect income investment” right now AND the details on how my second-level analysis uncovered it.