Imagine two closed-end funds (CEFs) that both yield upwards of 7%. Sounds great, right? Buy a bit of both and get $58.33 per month for every $10,000 you invest. Put in $500K and you’ve got a middle-class income dropping into your account without you having to do a thing.

While that’s a great way to achieve financial independence, we CEF investors know it’s not as easy as searching out a couple of 7% yielders and buying them. We need to go deeper.

While there are over a hundred CEFs yielding 7% or more right now, their quality varies widely. Some are yield traps that will drain your capital with lousy price performance over time, more than offsetting any dividend cash they pay you.

So how do we tell the strong CEFs from the pretenders?

That, of course, is the question that drives all of our CEF buys, so let’s tackle it by taking two seemingly promising CEFs and looking at what makes them tick: the Eaton Vance Tax-Managed Diversified Equity Income Fund (ETY), holder of a basket of large cap US stocks, and the Gabelli Utility Trust (GUT), which, as the name suggests, owns mainly US-based utilities, such as NextEra Energy (NEE), WEC Energy Group (WEC) and Duke Energy (DUK). In other words, GUT is the kind of fund you’d hold both for stability and the higher dividends utilities provide.

Both funds yield a bit over 7%, with GUT yielding an impressive 7.6%.

Dividend History Should Be Your First Stop

What’s happened with a fund’s payout in the past is a good thing to look at first, because once a fund cuts its dividend once, it’s more likely to do so again. 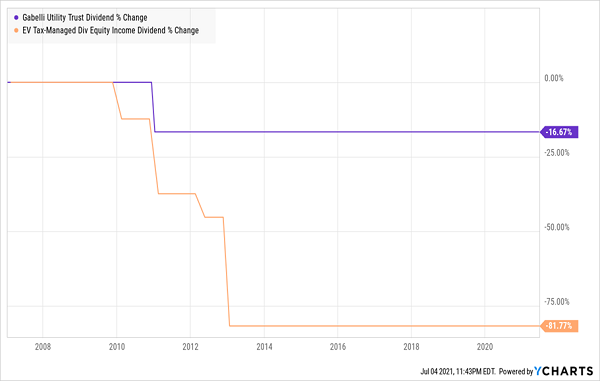 ETY, for its part, began rotating more heavily into companies like Microsoft (MSFT), Apple (AAPL) and Amazon.com (AMZN) around eight years ago, and these stocks are now the fund’s biggest holdings. That makes ETY a better buy than it used to be, but history tells us GUT is the clear winner on the dividend-stability front.

Once we’ve looked at the dividend history, we should move to a CEF’s discount (or premium) to net asset value, or NAV (the amount by which the fund’s market price trades above, in the case of a premium, or below, in the case of a discount, its portfolio value). As members of my CEF Insider service know, this is a critical indicator of future CEF performance. 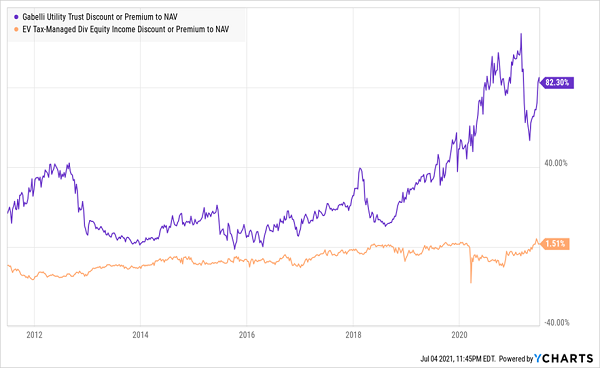 Investors have been punishing ETY for its past dividend cuts for years, giving it a discount that only recently turned into a small premium. But look at the purple line. GUT’s premium has gone haywire, soaring to 82.3%! That’s absurd for a CEF, as these funds rarely boast premiums higher than 20%, even in the best of times.

This absurd premium also means we can stop everything now and hand the crown to ETY: if you’re going to choose one of these 7% yielders, GUT is not the way to go, because a premium that big simply can’t last, and when it sinks, it’ll take down shareholders’ capital with it.

In fact, we’ve already gotten a preview of the damage that can be done by a premium plunging from such lofty levels. 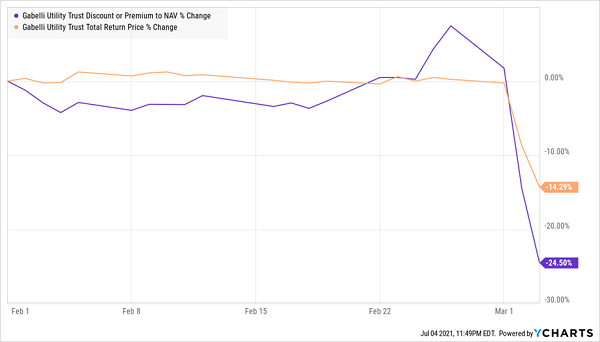 As we can see in the purple line above, earlier in 2021, GUT’s premium was even higher—a shocking 100%. In other words, investors were willing to pay double the value of the fund’s portfolio!

Even the often-irrational CEF market recognized GUT had gone too far and responded by briskly selling. When that happened, the premium dropped nearly 25%, and shareholders who stuck around lost 14.3% of their investment (as seen in the orange line above) in a matter of days as the market price-based total return plunged with the premium. This happened even though GUT’s fundamentals were fine, as you can see by the very slight drop in its NAV. 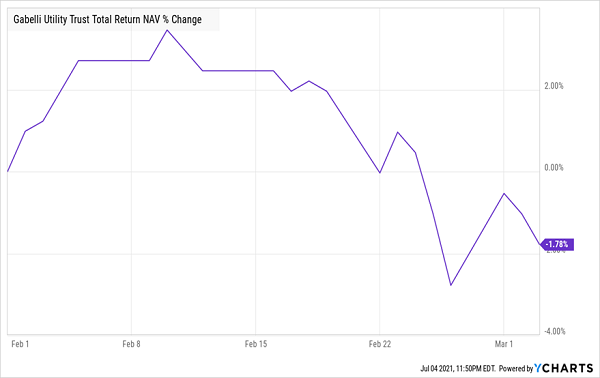 So even though the fund’s NAV was placid, declining a mere 1.8%, investors lost nearly 10 times as much because of the drop in the fund’s premium.

And even at the end of this selloff, GUT’s premium was 75%, by far the highest of any CEF on the market. If GUT sells off to a smaller premium, like the 1% ETY sports now, investors will be looking at massive losses.

Will GUT’s premium disappear so dramatically? It’s happened to other CEFs, and it could happen to GUT, as well. And there are signs that such a fate might be right around the corner. 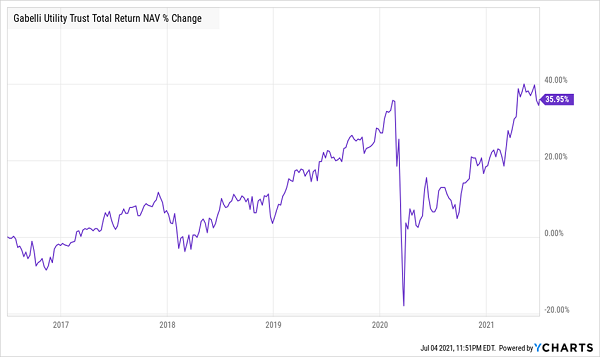 Over the last five years, GUT has earned a 6.2% annualized return on its market price. That’s lower than the Utilities Select SPDR ETF (XLU), a utility-focused index fund, which earned 7.6%, and the broader stock market (the S&P 500 has returned 17.8% over the same period). While some GUT investors may be in the fund for utilities exposure, I’m willing to bet most are not, and they will eventually pivot to whatever gets them a better return and a higher yield.

There’s another hidden danger here, too.

Remember GUT’s 7.6% dividend yield? Well, the fund cannot pay that forever if its annualized return is less than 7.6%, because it isn’t making enough profit to support its payouts. And the situation is actually worse than that, because remember, as well, that GUT’s yield is calculated based on its market price.

However, what really matters is GUT’s yield on NAV because that’s the total return managers need to get to support the fund’s payouts to investors. If they bring in any less, the fund will shrink in size as it pays its dividend by selling stocks in its portfolio. The way out of that relentless downward spiral is a payout cut.

And due to the outlandish premium, GUT’s yield on NAV is well above the fund’s market price, at 13.7% as of this writing.

In other words, GUT needs to more than double its average return over the last five years to sustain its current payout. That’s obviously impossible, so management will need to cut the dividend. The longer they wait, the worse off the fund will be, meaning there’s a strong incentive to make a cut sooner rather than later.

And that’s why ETY, with its much smaller premium, is a far better buy than GUT, whose high dividend and market value are clearly set to tumble.

Even though ETY is a much safer buy than GUT, it still doesn’t pass muster with me, because when I recommend high-yield CEFs for my CEF Insider service, I always demand a discount. And you should, too.

That’s why I’m pounding the table on 5 other CEFs today. They yield just as much as the two funds we just talked about—an outsized 7.3%, on average. But there’s a critical difference: all five of these unsung CEFs trade at ridiculous discounts—so much so that I’m calling for 20%+ price upside from each of them in the next 12 months, as their absurd markdowns disappear.

Add that 20% gain to their 7.3% dividends and you could easily be looking at a 27% total return in the next year here (and likely more)!

I’ll share full details on these 5 cash-spinning CEFs in a Special Report I’ve posted for you right here. Plus you’ll also get to road test CEF Insider and get instant access to the 14 CEFs in the service’s portfolio (average yield: 6.7%).

This potent income-building package is the answer to today’s zero-interest-rate world. Don’t miss out. Get full details on my top 5 CEFs yielding 7.3% now, plus a chance to try CEF Insider with no risk and no obligation whatsoever.