There are plenty of great reasons to invest in a closed-end fund, including my No. 1 reason: dividends! With CEFs routinely throwing out yields of 6% and up—often paid monthly—they’re tough to beat in a world where Treasury yields are stuck around 2.4%.

If you’re new to these funds, your timing couldn’t be better. I recently wrote a primer on CEFs that gives you all you need to know.

And today I’m going to show you 16 CEFs with juicy yields all the way up to 11%.

But before we get to that, we’re going to zero in on the one thing that makes the difference between a winning fund with a stable—and growing—dividend and a dangerous dividend trap: management.

Closed-end funds are managed by dozens of different companies ranging in size from BlackRock (the biggest, with a staggering $5.7 trillion in assets under management across all of its funds) to Bexil Advisors (which manages about $179 million in just two funds).

Some fund managers specialize in a specific asset class, like PIMCO (bonds), Flaherty & Crumrine (preferred stocks) or Cohen & Steers (real estate). Some offer a variety of CEFs for bonds, stocks and other assets, such as BlackRock, Nuveen, Eaton Vance and LeggMason.

Each company has a killer fund or two that beats the pants off the rest of their products (like the 16 I’ll show you in a minute). But first, let’s take a peek behind the curtain and look at how CEFs work from the inside (this is CEF Insider after all) and why understanding this is important before buying any CEF.

A Wealth of Expertise

Closed-end funds are typically structured much like hedge funds and mutual funds. Their core team usually consists of one or two portfolio managers and a group of analysts that works under those managers (that team can be just one analyst or can have as many as five specialists).

(By the way, I recently wrote an article on when it’s okay to pay higher CEF management fees—and when it’s not—for readers of my CEF Insider service. Click here to read it.)

There’s another kind of crossover that can pay off nicely, too, because a lot of these companies don’t just manage CEFs—they also manage mutual funds and hedge funds. When you compare the CEFs to those other funds, the difference in size is staggering.

To give an extreme example, let’s stick with PIMCO. Their Total Return Fund (PTTRX) has $73.7 billion in it alone, while their best-performing CEF historically—the Corporate & Income Opportunity Fund (PTY)—has just $1.1 billion. That’s a massive difference!

What’s more, PTY is bigger than over 450 other CEFs out there—so the CEF universe is tiny, and these funds are usually a small part of the overall operations at a big company like BlackRock.

I’ve seen a lot of people worry that CEFs are a bad investment for this reason. They have such a small amount of assets under management, the thinking goes, that they won’t get enough of management’s attention because the company has other funds that are much bigger, and thus more important.

In reality, the opposite is the case. In some instances, fund managers who work on CEFs work only on those CEFs, so they’re not dividing their time between that and a bigger fund. In most cases, though, managers are, in fact, working on the small CEF and the big mutual fund or hedge fund at the same time.

Contrary to what many people think, this is very good and a driver of returns.

Think of it this way: imagine PTTRX’s managers come across an investment opportunity. According to their analysis, this is a whopper—it’s massively underpriced and has the potential to offer a 20% return in the next year alone.

There’s just one problem: the investment is “only” $100 million. If PTTRX invested in it, it would be 0.1% of the fund’s total assets—so microscopic that the gains wouldn’t do anything to PTTRX’s total return. However, if that investment was put in PTY, it would account for 9% of the fund’s holdings—and its 20% gains would represent a 1.8% return for all of PTY.

Suddenly it makes a lot of sense to put that investment in PTY instead of PTTRX—and this is what a lot of fund managers do all the time. They find really great ideas that they can’t put in their big mutual funds or hedge funds because those funds are just too big, so instead they put them in the smaller CEFs, where they can make a serious difference.

This is why the smallness of CEFs makes them extremely compelling.

So how do funds go about picking assets to invest in?

The process will, of course, vary from company to company, and each will point to its own investment strategy as the advantage that sets it apart. However, there is a basic process that is the foundation of what most CEF managers do:

The best part about CEF managers is that they will learn from their mistakes. In short, this selection process is constantly retested and refined. If they discover that a certain strategy isn’t working, they will change it—and the fund’s performance will improve.

So which funds are the best? Here are the 16 top funds by annualized return from 16 different management companies. For each fund, I’ve included key factors like management fees, discount to NAV (the difference between a fund’s market price and net asset value, or the value of its underlying assets), yield on NAV and more: 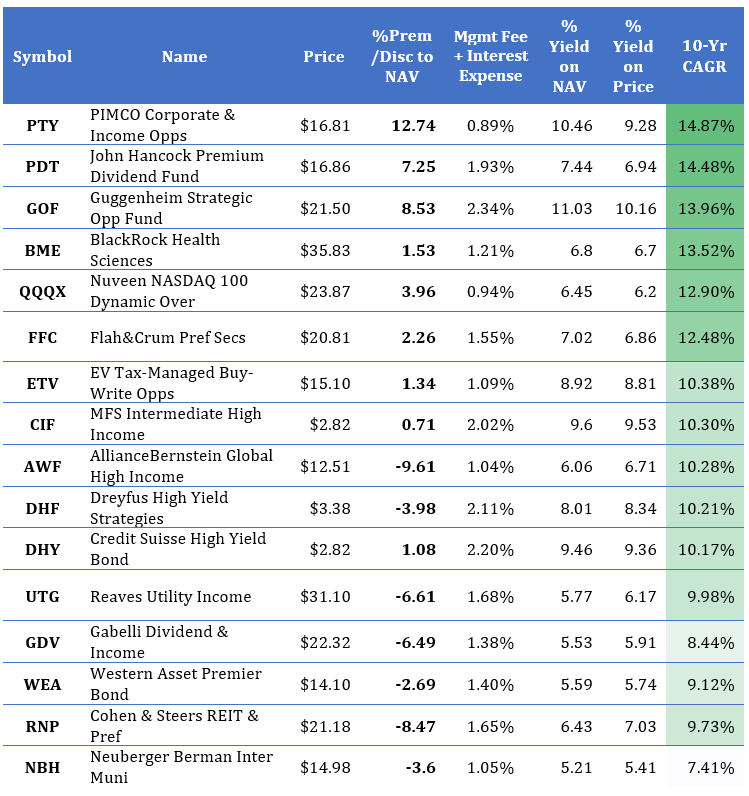 What’s cool about CEFs is that you could have bought all 16 of these funds a decade ago and had an 11.1% total return per year—which is higher than the S&P 500’s 8.2% over the same period. Oh, and you’d be better diversified, with a variety of bonds and stocks, too.

Finally, if we want to really evaluate a fund manager’s expertise, we’re lucky—if that’s the right word—to have the ultimate proving ground at our disposal: the 2007–09 financial crisis.

Of course, every stock and fund took a hit during those dark days, but when I research CEFs for my CEF Insider service, I take a close look at each potential pick’s performance during that pressure cooker with an eye out for one thing: whether it snapped back faster than the market as a whole.

So you can imagine my surprise when I saw this chart: 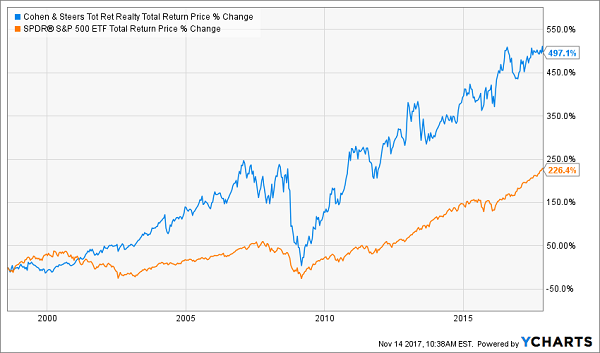 I think you’ll agree that this is a heck of a performance: my pick more than doubled up the S&P 500—even when you include the dot-com meltdown AND the Great Recession! But it gets even better when you consider two other things:

Tightly run funds like this are common in the CEF world, but since there are only 500 or so of these funds in existence, few investors know about them. The press can’t be bothered, either. They’re too busy parsing the latest Apple (AAPL) iPhone sales numbers or breathlessly reporting on the latest twist in D.C.

But I do know about these funds because I’m one of the few analysts in the world who is 100% devoted to the CEF space. And I just released my complete research on this CEF and 3 others in a brand new special report.

These 4 top-flight funds are run by some of the best managers in the business (one of these pros has $250,000 of his own cash tied up in his fund—a rare vote of confidence I love to see in a CEF!).

You can get instant access to this report—including full details on my complete CEF investing strategy and everything you need to know about my top 4 CEF picks—by clicking here now.