The term closed-end fund (CEF) is a bit of a double entendre. An unintended one, I’m sure – and one we can leverage for safe 6%, 7% and even 8% yields with upside to boot.

The “closed” in CEF technically means that the fund’s number of shares are fixed. Which is why these vehicles can have wild price swings above and below the values of their actual assets. (Good for us contrarian income seekers – we can buy below fair value to maximize our yields and upside.)

They are also closed in their actual communications with the financial world. Fund information is often limited (sometimes to one-page fact sheets) and it’s difficult to get management to talk to you.

(Also good for us contrarians – it makes bargains more prevalent in this mysterious corner of the income world. Especially for us persistent and analytical types).

But with the deals and big dividends come the dogs, and it’s up to us to piece together facts and financial crumbs of information to determine which to buy, avoid and sell. Ultimately we must look at each fund to figure out if its:

The dividend is important, but it doesn’t mean much if you give the payout back on the price side. Some funds cannibalize their own capital, paying dividends while their quote ticks lower and lower. Like these 29 money losers.

There are 29 CEFs, still in business and publicly traded today, that have lost money since inception.

This is an impressive level of incompetence. When these funds are formed, they buy assets so they can achieve a positive return – ideally more than their promised dividend – and pay regular distributions to their investors. They have but one job to do.

These 29 have failed at that. They haven’t made anyone any money, ever, and they are nothing more than Ponzi schemes that reach into their own investors’ pockets to pay them.

Here are the four biggest offenders who have “achieved” double-digit losses on their net asset values (NAVs) since inception:

Three of the four funds launched in 2014, pinning the tail on the energy top nicely. But it’s one thing to run with the herd, and another to bankrupt it entirely – which is what the Cushing fund has somehow managed to do: 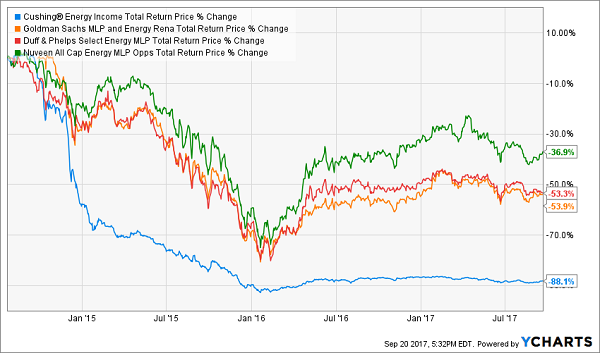 But how do you know in advance when a sector is overheated and ripe for a crash? Look for premiums, which should always be faded.

When the Goldman MLP fund launched, it traded at a steep premium (10%+) to the value of its underlying assets. In other words, investors were paying $1.10 to get a dollar into Goldman’s latest sucker bet: 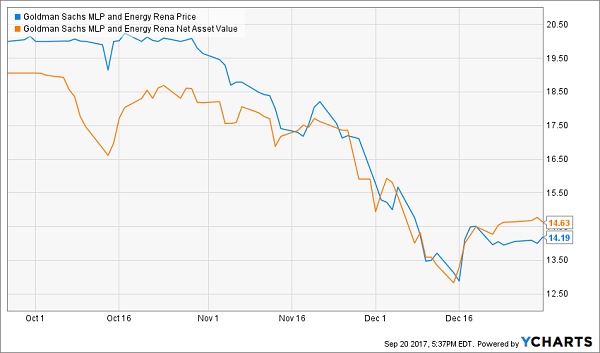 Of course price and NAV turned south quickly, and the premium disappeared. But today, there are still 129 CEFs trading for more than their assets. All should be avoided, no matter how good you think the fund is (or how many stars Morningstar gives it).

There’s no reason for the disparity. Gundlach runs both funds, and has a wide mandate (the ability to buy anything he wants) with both. Which is why I told my subscribers to purchase DSL in April 2016 and avoid DBL.

Both 8%+ dividends were safe. But the price discounts (or lack thereof) made the difference, as we banked 43% gains while DBL investors watched their cash grind sideways:

DSL Shows Why We Demand Discounts 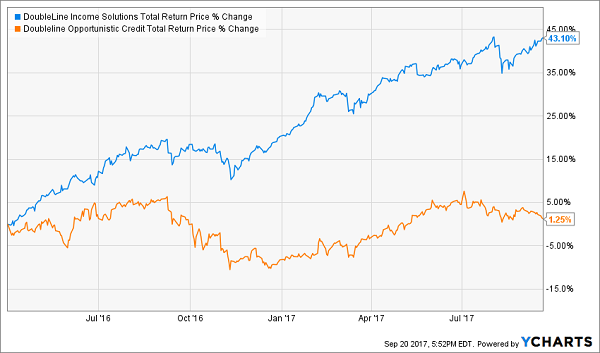 Let’s circle back to the money losers, because we let a few funds off the hook too easily. Namely those that haven’t generated at least 5% returns on NAV since inception.

If a manager can’t generate a 5% return on his own assets, how is he or she supposed to pay us much more than that? Sure, CEFs can borrow money for cheap and leverage their gains a bit – but even 20% leverage on 5% only gets us to 6%, the bare minimum of our income thresholds.

I hear from many investors who want yields of 7% or 8% so they can leave their capital untouched. These are aggressive but admirable income goals – and achievable when you buy the right CEFs at the right time.

Markets are quite expensive at the moment, but we do have an opportunity to buy some excellent CEFs for cheap right now thanks to misinformed Fed fears.

Here’s a little-known secret that will help you identify funds that are unfairly discounted:

Some funds today are selling at discounts to their NAVs on the fear that rate increases will hurt them. But this lazy conclusion is wrong. 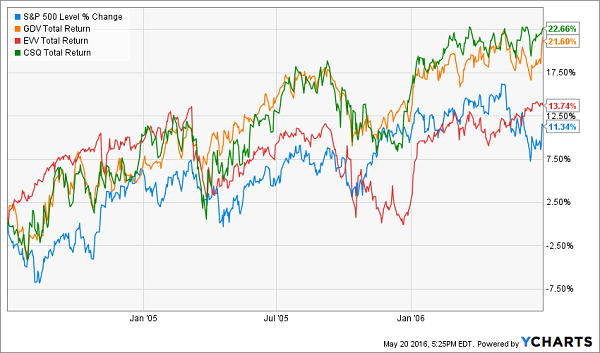 With rates once ticking up, it’s the perfect time to buy the few high quality funds that are still trading for discounts.

Today I like three CEFs in particular. They all pay 8%+ yields, helping you live off their dividends alone – which is why I call them Dividend Superstars:

And right now, thanks to rate hike worries, they are all trading at a generous discount to their NAVs. Which means you can buy them today, bank the big dividends and enjoy 15% to 20%+ price upside to boot.

Click here and I’ll share their names, tickers and buy prices – along with more favorites to stash in your own “No Withdrawal” Portfolio.