2 Drug Stocks To Buy For Safe Dividends And 20% Gains

With all the bloviating on the campaign trail about reeling in drug costs these days, it’s safe to say the pharmaceutical industry is under siege.

But it’s not all the politicians’ fault; many of the sector’s injuries are self-inflicted. Case in point: Valeant Pharmaceuticals (VRX), whose stock has plunged 62% amid ongoing accounting concerns.

Investors, predictably, have voted with their feet: since the start of the year, the iShares US Pharmaceuticals ETF (IHE) has plunged almost 14%, nearly tripling the S&P 500’s decline.

But as with any selloff, it’s not just sickly stocks that are being punished. It’s the healthy ones, too. I’m talking about companies that generate strong cash flows and fatten investors’ wallets with buybacks and dividends—while also fattening their pipelines through R&D and acquisitions.

Here are two of my favorites now. Besides being great income plays, I expect both to tack on 20% gains by the end of 2016.

If you’re looking for a drug stock with a high, safe payout, look no further than Pfizer Inc. (PFE), with a 3.9% dividend yield that’s the highest it’s been in four years.

The drug giant hasn’t been immune to the pharma smackdown, dropping 13% since early November. That plunge—plus a 7% dividend hike announced in December—is the reason for the high yield. It’s also whittled Pfizer’s forward P/E ratio down to 12.3—a level not seen since 2012. 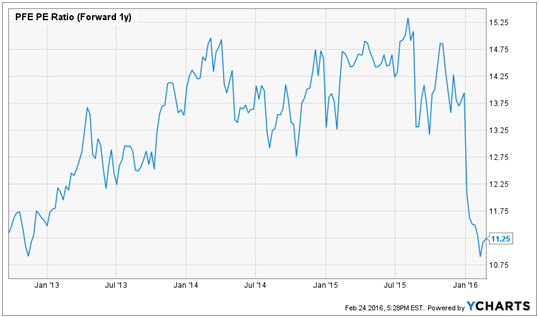 That ticks the income and value boxes. Now let’s talk about growth, which has been AWOL in the past few years as Pfizer grappled with a so-called “patent cliff” that forced some of its top-selling drugs to go head-to-head with cheap generics.

The results? Downright ugly. Arthritis treatment Celebrex, for example, saw its sales nosedive 70% from 2013 to 2015, while cholesterol drug Lipitor suffered a 20% slide in that time.

And there are more patent headaches ahead, including Viagra in 2017 and epilepsy drug Lyrica in 2019. But the Pfizer story is now more about new drugs—and the company, which pumped an incredibly high 16% of its sales into R&D last year, has plenty to look forward to on that front.

A great example is Ibrance, for metastatic breast cancer, which the FDA signed off on last February. Ibrance clocked $723 million of sales this year, and Wall Street sees that hitting $3.2 billion in 2017 and eventually peaking at $6 billion. To put that in context, Pfizer’s total 2015 revenue was $48.9 billion.

And the hits keep coming. The company’s upcoming tie-up with Ireland-based Allergan plc (AGN), for instance, would create the world’s biggest drug firm and bring Allergan’s raft of in-demand drugs into the fold, not the least of which is anti-wrinkle treatment Botox, which racked up a 43% year-over-year sales gain in the fourth quarter.

Pfizer would also be able to shift its HQ to Ireland, thereby cutting its tax rate from 23.5% to between 17% and 18%. Lawmakers loathe these so-called “tax inversions” and have vowed to put the brakes on them, but Pfizer insists this one will go through.

Either way, the company’s muscular pipeline and hefty share buybacks (it’s slashed its share count by 22% in the past five years) should keep its earnings, share price and dividend rising. Wall Street agrees: the median price target now sits at $38.00, up 27% from today’s level.

At first glance, Gilead Sciences Inc. (GILD) may not seem terribly exciting from a dividend perspective. After all, it only started paying dividends last fall, and its annual rate of $1.72 yields just 2.0%, a hair below the S&P 500, at 2.3%.

But for long-term investors, dividend growth is what really matters, and so far, I like what I see: on February 2, Gilead announced that it will hike its quarterly payout by 10%, bringing its annual rate to $1.88.

There’s no doubt Gilead meets our bargain criteria, with a forward P/E ratio of just 7.3.

Why so low? Wall Street’s worried competitors will steal a big slice of the hepatitis C market, of which Gilead’s Harvoni and Sovaldi treatments hold 90%.

To be sure, Gilead leans heavily on these drugs, which supplied 63% of its 2015 revenue. And yes, competition is heating up: AbbVie Inc. (ABBV) released its Viekira Pak treatment in December 2014, and the FDA just signed off on Zepatier, from Merck & Co. (MRK), on January 28.

Both Zepatier and Viekira Pak are priced below Harvoni/Sovaldi. However, Gilead has already been offering deep discounts in the US, and that hasn’t dinged the drugs’ sales, which rose a combined 27% in 2015, to $19.1 billion.

Viekira Pak, by contrast, rang up just $554 million in its first year, and the analysts are only calling for $2 billion in Zepatier sales in 2020. Even if that comes to pass and more competitors enter the market between now and then, Gilead will still control the lion’s share.

Also lost in the noise is Gilead’s strong pipeline, including its next-generation hep C treatment, which the FDA will rule on by the end of June. The FDA also recently approved Gilead’s Genvoya HIV drug, which should help increase the $11.1 billion of revenue the company collected from HIV treatments last year.

And I wouldn’t bet against Gilead’s ability to crank out more blockbusters: it pumped $3.0 billion (or 10% of sales) into R&D in 2015, an amount that’s up tenfold in the last decade: 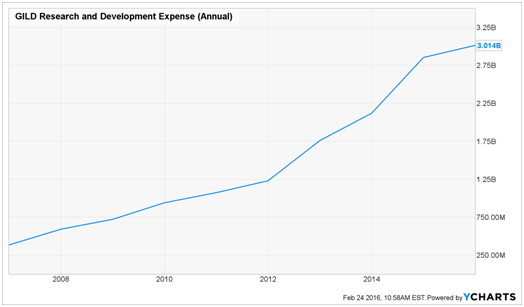 As with Pfizer, Wall Street sees big things ahead for the shares, too, with a median price target of $116, implying 30% upside from here.

Even though these two pharma giants look like great buys now, I actually like three other healthcare stocks even more. That’s because they throw off dividends investors in Pfizer and Gilead can only dream of. I’m talking about payouts of 7.9%, 8.5% and 9.4%.

Like Pfizer and Gilead, they’re capitalizing on the biggest demographic shift in US history—the aging of America’s 77 million baby boomers—but they’re doing it without the fierce competition and patent headaches these two companies have to deal with.

Instead, they’re providing direct care to an elderly population that’s exploding. Consider that 10,000 Americans turn 65 every single day—and will continue to do so for the next 15 years.

This bull market in aging Americans is already starting to drive my three picks’ dividend yields higher. Check out the payout growth in my favorite firm, which raises its dividend every single quarter: 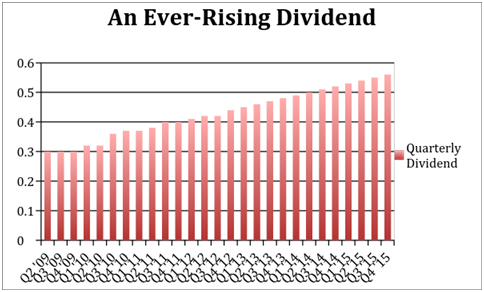 The best part? Most investors haven’t heard of my three top picks. That means you can not only collect yields north of 8%, but you’re positioned to grab 15-20% upside in the next 12 months as other investors pile into these reliable dividend-payers.

That’s why I’m urging my subscribers to lock in these juicy dividends today, while they’re still cheap. Click here to get the names of all three of these dream investments and discover how we’re playing this megatrend now.