If you made money investing in oil this year, congratulations! But I have a warning: now is the time to take profits—especially if you hold the two oil funds we’ll discuss below.

Before we get to those, let’s talk a little more about oil’s big year. If you bought earlier in 2022, you managed to pick up on the only sector in the green this year—and well into the green, too: the Energy Select Sector SPDR ETF (XLE), a good benchmark for oil stocks, has climbed 55% so far in 2022, while the S&P 500 has headed the other way, dropping some 20%.

To be sure, there were lots of one-off events that fueled crude, like the Ukraine war, supply-chain bottlenecks and China’s stubborn zero-COVID policy.

And while those events make for terrific short-term trades, unpredictable events like these also show why oil isn’t a good long-term buy, especially if you’re investing for income. To see what I mean, let’s stretch our timeframe out. 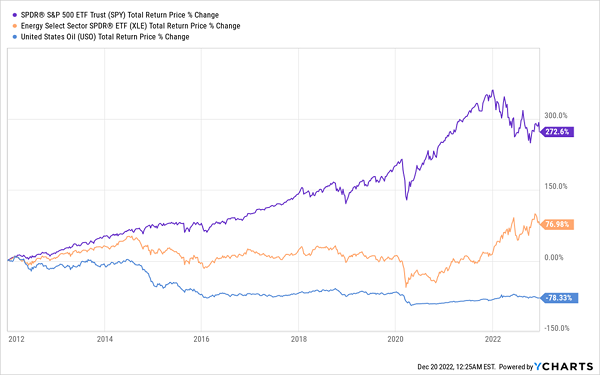 As we can see above by the performance of XLE, in orange, and the United States Oil (USO) ETF, a good proxy for oil prices, in blue, if you invested in oil in 2014, you would’ve seen a big drop in short order. But here’s the thing: holding oil for a five-year period at almost any point since 2010 would either mean losing money or underperforming the broader market. 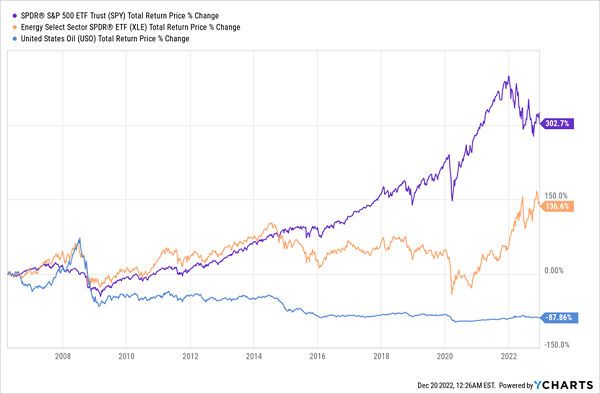 This is why we’ve stayed out of oil in my CEF Insider service: we’re more focused on the long term. And the long term isn’t great for oil. Not only because history tells us so, but because oil prices have already come down, while shares of oil companies continue to levitate. 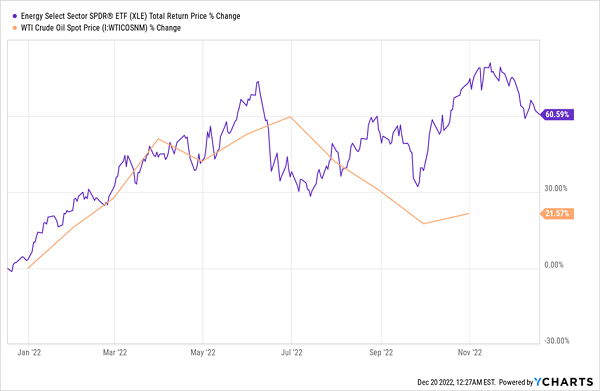 In other words, if you’ve seen oil profits in 2022, now is the time to consider getting out, because oil prices are back to where they were before the Ukraine conflict, and oil reserves are growing. According to Oil & Gas Journal, reserves are up 1.3% in 2022 from a year prior. Meantime, the Ukraine crisis has shown the world that fossil-fuel reliance is a geopolitical risk, prompting the European Union to shift away from natural gas and oil faster than it was already.

In short, you can make a lot of money in oil in the short term, but in the long term, the risks are high, especially after the recent jump in commodities.

2 Overvalued Energy Funds to Own Now

This is why energy-focused CEFs are a minefield. For one, many invest in oil more directly and are less focused on oil companies, which at the least try to translate oil volatility into stable gains and dividends.

Moreover, the numbers tell a stark tale about these funds: consider that only 7.6% of all CEFs have had a negative annualized return over the last 10 years or since inception, whichever is soonest. But of those, energy CEFs account for almost half (48%). These two are particularly risky right now.

GGN’s Approach Sounds Reassuring, but It Has Hidden Risks

Let’s start with the GAMCO Global Gold, Natural Resources & Income Trust (GGN), which may catch your eye with its 10% dividend (and monthly payout). But while the fund’s name may make it sound like you’re getting a diversified resource-sector portfolio, including inflation hedges like gold, the reality is that GGN mainly focuses on oil-drilling firms like ExxonMobil (XOM) and Chevron (CVX). Its energy investments have weighed on its long-term performance (GGN is shown in blue below).

GGN Lags Oil Stocks and the Market in General 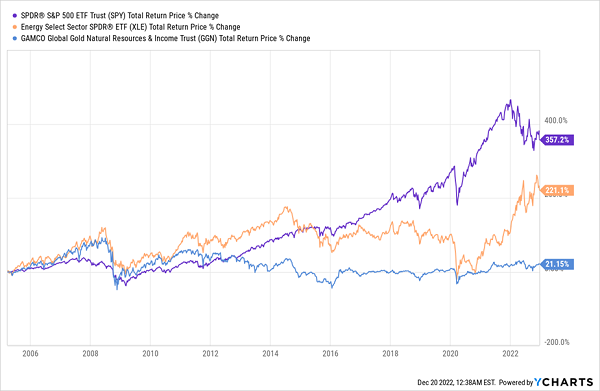 Even in 2022, when oil stocks soared, GGN has only eked out a 4% gain. This is a good reason not to be fooled by the fund’s 10% yield, but it’s not the only one, because that high yield masks the fact that the fund has cut payouts by 79% over its history! 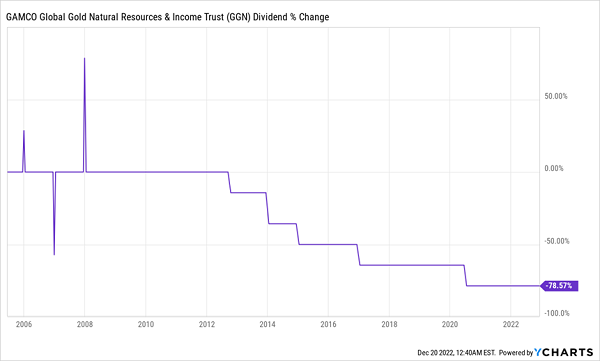 Clearly, if you’re bullish on oil, GGN is not where you want to be, even if its 6.3% discount to NAV looks like a good deal (it’s had bigger discounts before, and other energy funds have bigger ones now).

This CEF’s Payout Is on a Downward Slide

Another oil CEF to avoid is the BlackRock Energy & Resources Trust (BGR), one of the oldest energy CEFs out there. Its 12.7% discount is a great selling point, even if its 5.8% dividend isn’t quite as high as the yields on many other CEFs. But does BGR make up for it with a reliable payout? 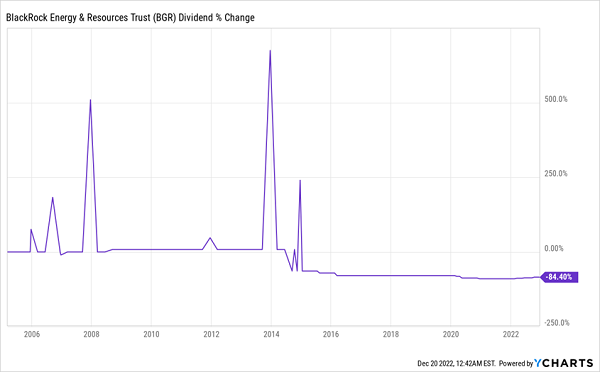 Not only have dividends been slashed over the long term, but BGR has underperformed the energy sector by more than half. (BGR is shown in orange below.) 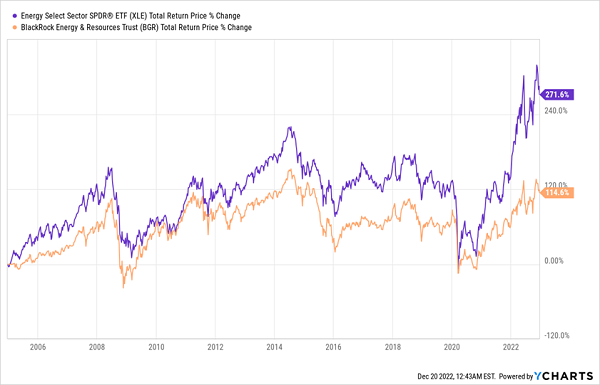 The silver lining? BGR does better in bull markets for energy than GGN does: it’s up 33.7% in 2022, as of this writing, much more than GGN’s 4% return over the same period. But BGR still falls far short of the energy sector, both this year and over the long term, indicating that it has not updated its approach to energy markets for what works in the modern world.

As mentioned, energy CEFs can be a good short-term trade, but the above two are clearly investing for the energy needs of yesterday, not tomorrow. Until we see an energy CEF with a smarter approach, investing in fossil fuels and renewables where there is value, while also trying to minimize volatility, there are better CEF options for upside and sustainable dividends.

Instead of oil CEFs, I’m recommending my CEF Insider members pick up 5 other funds that come from a range of other sectors, including blue chip multinationals, top-quality corporate bonds, large-cap techs and other stable income producers.

These are reliable 8.9% average dividends we can build our retirement on—and these rich payouts come our way monthly, too, right in line with our bills. We can also reinvest our monthly payouts faster than quarterly dividends, amplifying our gains (and income streams) even more!

Throw in these 5 funds’ outsized discounts (which I expect to drive strong price gains in the coming months), and you’ve got a very nice setup for income, gains and diversification here.

Click here and I’ll share my research on these 5 monthly income funds in an exclusive Special Report revealing these 8.9%-payers’ names, tickers, yields, a complete breakdown of their portfolios and more.