Each November, the National Association of Real Estate Investment Trusts (NAREIT) hosts a conference that brings all of the key players in the sector together. The timing of REITworld creates an opportunity to see who’s poised to perform well in 2019 and beyond.

The general consensus from the meeting this year in San Francisco was that the Apartment owners are positioned well for the near future, while the outlook for Retail and Storage names remains volatile.

Individual pockets of both strength and weakness can be found where you least expect it and here are two REITworld winners and one loser that may have flown under the radar. 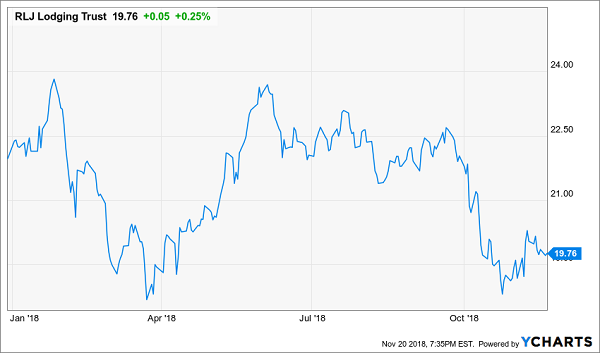 RLJ Lodging Trust (RLJ) owns 150 hotels across 25 states. Even though the stock is 14% off its June highs, management has reported a lot of good to investors lately.

The company said at REITworld that the 2017 acquisition of Felcor is progressing well, having already achieved cost-cutting targets. In addition, management is seeing higher-than-expected prices for recent asset sales, which has allowed for a larger debt paydown than planned.

RLJ even hinted that it would consider buying back stock in 2019. In the meantime, the shares offer a quarterly dividend of $0.33 a share (6.7% yield). The company posted adjusted funds from operations (FFO) of $0.58 a share in the third quarter, which exceeded the consensus analyst estimate and can comfortably cover the payout.

STAG Industrial (STAG) owns over 300 buildings, the majority of which are warehouses or light-manufacturing sites. My colleague Brett Owens has been a fan of the company, which recently delivered positive news to investors.

Management said at REITworld that it plans to make about $600 to $700 million of acquisitions next year, following a similar amount in 2018. STAG noted that recent purchases are seeing higher rent increases at longer lease terms, while requiring lower capital expenditures. However, the company doesn’t just buy its growth– management posted 1.4% same-store net operating income growth in the third quarter.

That growth has flowed through to the dividend, which is monthly and stands at $0.1183 a share (5.4% yield. STAG has raised the payout three times in the past two years and could do so again, as management has been conservative with using debt. The majority of the company’s loans are at a fixed coupon, which limits exposure to a continued rise in interest rates.

It should come as no surprise that one of the REITS to stand out with a negative outlook operates shopping centers, given the spate of bankruptcies in the retail sector in 2018. 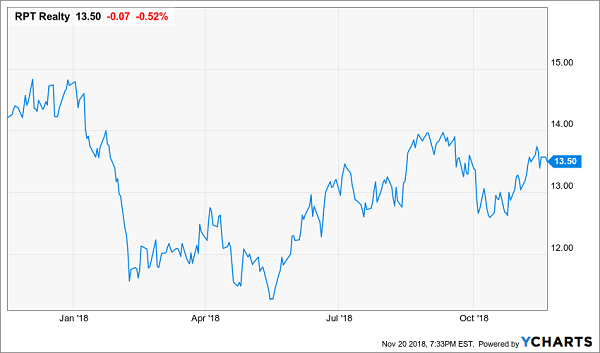 RPT Realty (RPT), formerly known as Ramco-Gershenson Properties Trust, owns 57 properties in 13 states, primarily in the Eastern half of the U.S. The company hired new chief executive and chief financial officers this year and the new management team is trying to reduce borrowings and streamline the business.

While RPT is looking to sell $150 to $200 million of assets in 2019 to help pay down debt, management said at REITworld that initial offers are coming in below expectations. Back in October, the company reported that third-quarter revenue fell 2% from the previous year and that occupancy rates are below 91%.

RPT offers a quarterly dividend of $0.22 a share (6.5% yield), but the previous management team ended the practice of annual payout increases back in 2017.

RPT is in a state of transition—new strategy and new management, but its customers are still operating in a business that’s increasingly being dominated by the likes of Amazon, leaving a gradually decaying market for legacy retailers.

With interest rates on the rise, RPT Realty isn’t the only REIT that could struggle in 2019. However, my colleague Brett Owens has identified 2 bargain names in the sector that won’t just survive higher interest rates, they should actually thrive!

These REITs are currently yielding 7% and higher, which is more than RLJ Lodging and STAG Industrial are paying. In addition, they operate in recession-proof businesses and can regularly raise their dividends, because the underlying FFO grows on a consistent basis.

Right now, Brett is currently sharing the names of these REITs, along with his 25% upside potential targets, exclusively to readers of the Contrarian Income Report.

The best part is that he does all the work for you! You don’t have to spend a week at REITworld or sift through the dozens of REITs out there, including the ones with woefully low yields or deteriorating business models.

These 2 recession-proof REITs with 7% yields and 25% upside are just one piece of a Brett’s Contrarian Income Report. Click here to discover how you can generate 8% annual income on your hard-earned money, without having to touch your original investment.