3 Auto Stocks To Add To Your Income Portfolio

China’s slowdown and a raft of scandals—Volkswagen’s (VW) emissions clunker being the latest—have kept nervous investors away from auto stocks this year.

Their first-level knee-jerk reactions are costing them income. Right now, General Motors (GM) and Ford Motor Company (F) offer yields around 4%. And both companies should have no trouble paying their shareholders for years to come, thanks to robust sales that, despite mainstream naysaying, actually still have plenty of room to run.

US car sales have been on a tear, and that continued in September, when consumers drove 1.44 million cars and trucks off dealers’ lots, up 16% year-over-year. If that pace holds up, Car and Driver sees US sales topping 18 million units this year, the highest total in at least 15 years. And more gains are ahead.

The American vehicle fleet is a little rusty. Right now, the average car on US roads is 11.5 years old, a new record, according to automotive research firm IHS.

That’s good news for carmakers because it means more drivers will be motivated to trade up in the years ahead. Recent innovations, like better fuel economy and high-tech infotainment systems that seamlessly tie your smartphone into your car, should help seal the deal.

Add in a Federal Reserve that looks increasingly hesitant to raise interest rates, improving consumer confidence and a 28% drop in gas prices over the past year, and the outlook for both Ford and GM looks strong at home.

But what about China? Here too, there’s reason for guarded optimism.

Growth in Chinese car sales slowed this year, and while next year’s sales are hardly expected to be earth-shattering—up 3% from 2015, according to IHS—they’ll be helped by a sales tax cut for smaller cars that kicked in October 1.

But here’s another number you rarely hear in a discussion about Chinese car sales: 4.8. That’s how many years Chinese drivers tend to hang on to their wheels. It’s an important figure, according to a September report from Credit Suisse, because it suggests part of 2016’s weakness stems from poor new-car sales back in 2011.

For 2017, Credit Suisse sees a return to double-digit growth (up to 10%). By 2020, the investment bank predicts one in seven Chinese will own their own wheels, up from one in 12 last year.

Dividends Should Rise Modestly With Earnings

So where does this leave dividend yields at GM and Ford? GM currently boasts a trailing twelve-month payout ratio—or the percentage of earnings being paid out as dividends—of 55.4%, while Ford comes in at 58.3%. Both are above the 50% I like to see in stocks I recommend to readers of my Contrarian Income Report advisory, but they still look safe given the upcoming sales gains each company should enjoy.

And right now GM is going the extra mile with an ambitious plan to buy back $5 billion worth of its shares starting last March and wrapping up by the end of 2016. The carmaker made the promise to avoid a proxy fight with activist investors.

This, of course, caused more hand-wringing among the herd, whose “first-level thinking” triggered worries the company was spending too much on buybacks just a few years after emerging from bankruptcy.

However, GM was carrying $25 billion in cash on its balance sheet at the time and has said it aims for just $20 billion, which its CFO believes is plenty to weather a recession. It’s also a good time for a buyback, because the stock is cheap: GM trades at just 7.4 times forward earnings, compared to 17.0 for the S&P 500.

An Automotive Spinoff to Watch

Investors can also profit from surging car sales through component makers. One to keep an eye on is Johnson Controls (JCI). The stock boasts a modest but respectable 2.4% yield, with a dividend history that stretches all the way back to 1887. Its payout ratio is just 42.3%: 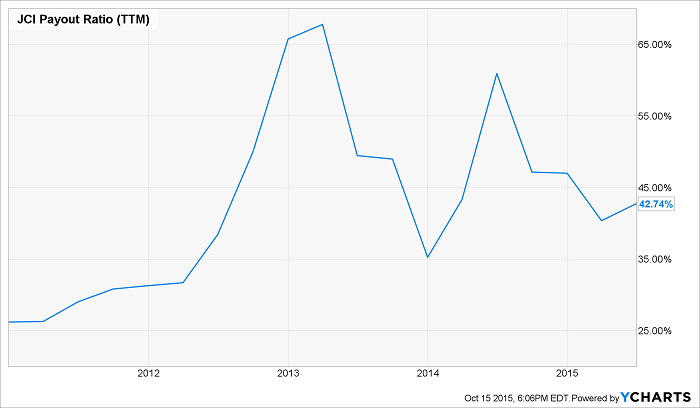 But here’s the real near-term catalyst: Johnson plans to spin off its Automotive Experience division, which supplied 51% of its 2014 sales and is the world’s largest maker of seats for carmakers. It also produces other interior components, like instrument panels and door systems. The company will hang on to its Power Solutions business (16% of sales), which makes lead-acid batteries for cars, and its Building Efficiency division (33%), which specializes in heating and air conditioning systems and related controls.

The split will take place in mid-2016, and it could be a win for Johnson’s investors. Spinoffs and parent companies tend to outperform the market (as we discussed a few weeks ago).

These three auto giants each yield more than the average S&P stock. Despite broader pessimism on the industry, they’ll see rising sales and earnings, and even a spinoff to boot in the years ahead.

I, however, prefer to only buy stocks that pay 6% or more. It’s a high bar, and there aren’t many secure dividends at these levels—but they do exist. My current favorite is cashing in on the aging US population, a trend that’s here to stay. And it’s a recent spinoff paying 7%. The company just started trading on August 18, so few investors have picked up on it—yet.