These Dividend Stocks Are Poisonous To Your Portfolio

It happened again. Income-seeking investors piled into a 3% payer under the guise of dividend growth and safety… and they lost 10% in a single day.

Wal-Mart (WMT) lured them in and lowered their net worth this time. Before the drop, the company’s yield was at an all-time high of 3.1% thanks to 42 years of consecutive payout increases. The aristocratic allure of this dividend-payer tempted forward-looking fans. They envisioned today’s payout compounding itself in their portfolio at previous growth rates.

But Wal-Mart bulls missed several risk factors while fantasizing about their 2025 dividend payments. And they mistakenly believed a 3% yield would be sufficient to buffer any bad news. It wasn’t, and the stock suffered its worst day ever after cutting its earnings outlook for 2016.

How to Lose 3 Years of Dividend Payments in a Day

Wal-Mart was able to triple its dividend since 2005 partly because it was able to double its payout ratio over the same time period. The company’s problem going forward, though, is it doesn’t have much room to boost it from here. Instead it needs to reinvest earnings in new stores and especially new technology, as Amazon.com (AMZN) continues to gobble up retail sales that would’ve been made at Wal-Mart a few years back. 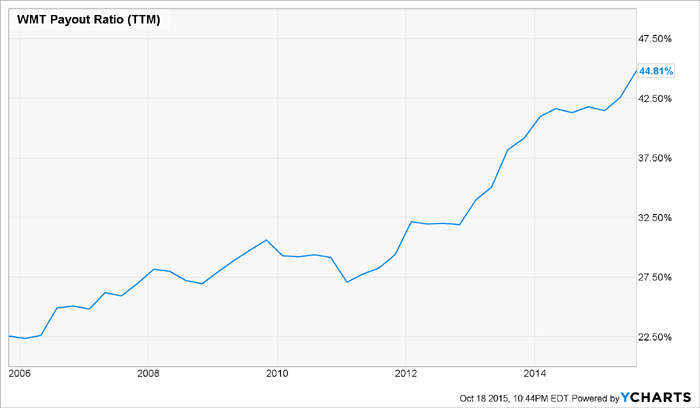 Earnings growth – or lack thereof – is an even bigger problem. Stock prices follow earnings over the long haul, and rising earnings power rising dividends. It’s no coincidence that the company’s payout ratio started to leap in 2012 – just as earnings plateaued: 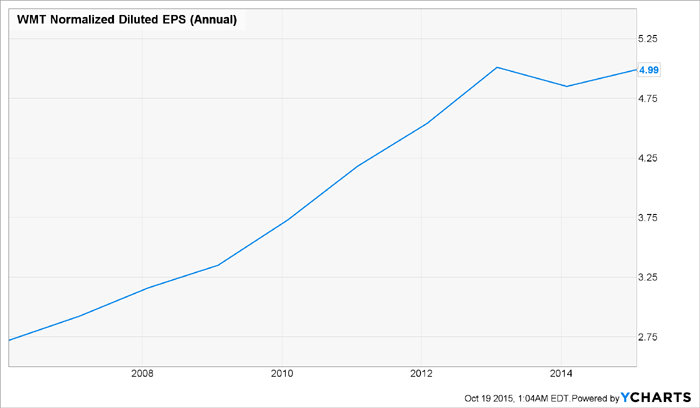 Wal-Mart might have seen its stock spared for now had it forecast modest single-digit earnings growth. That would at least have given dividend investors hope for the future. But their negative forward-looking forecast of a 6 to 12% earnings drop for next year was a real disaster.

These are the dirty secrets of a dividend aristocrat living on past glories. I’d rather leave the rearview mirror investing to the first-level thinkers. Besides, a 3% dividend is not enough to protect a stock from a slide. It’s actually a dangerous yield for investors to chase, because they get lulled into a false sense of comfort.

Wal-Mart’s not the only hallowed name with an outdated business model and rising payout ratio. Here are three more 3% payers at risk for double-digit declines:

Paper products maker Kimberly-Clark (KMB) has raised its dividend 43 straight years and counting, but this streak is in danger if KMB can’t peddle more paper soon. The company is already paying out 86% of its earnings in dividends – but its EPS are down 27% since 2011 while its payouts are up 20%.

KMB’s payout ratio could easily exceed 100% in the next year or two, for reasons we explained here. Like Wal-Mart, KMB is losing sales to internet-based “e-commerce stores.” My wife has not yet bought a KMB-branded Huggies diaper for our 11-month year old daughter, and probably never will. She prefers to go online and purchase the Honest Diapers peddled by celebrity founder Jessica Alba instead.

Food sales under McDonald’s (MCD) golden arches have been under pressure in recent years. The company is on the wrong side of every major food trend in America, and that’s finally starting to affect earnings. EPS are down 8% since 2011 at MCD, while dividend payouts are up 30% over the same time period. Its payout ratio has climbed to 68%, from sub-50% four years ago. McDonald’s may need to start flipping its valuable real estate in addition to burgers in order to fund payouts in future years.

Finally, investors are paying 24 times earnings for food distributor Sysco (SYY), which sports declining earnings and operating margins. Income seekers love SYY’s streak of 44 consecutive dividend payments. That streak is running on fumes, however, as management is tossing out annual increases less than 4%.

Meanwhile the company’s payout ratio has ballooned to 79% of earnings. Sysco will need to make some acquisitions in hopes of giving itself some pricing power – but it doesn’t have a lot of cash available with most profits funding the dividend and share buybacks. Something is going to give.

Instead of fooling around with aging 3% aristocrats, I prefer to secure 6% dividends today whenever possible. These levels will actually support a stock price, and there are some great, safe yields available at the moment. My second-level analysis has uncovered five issues paying an average of 7% for our Contrarian Income Report portfolio – click here and I’ll explain more.